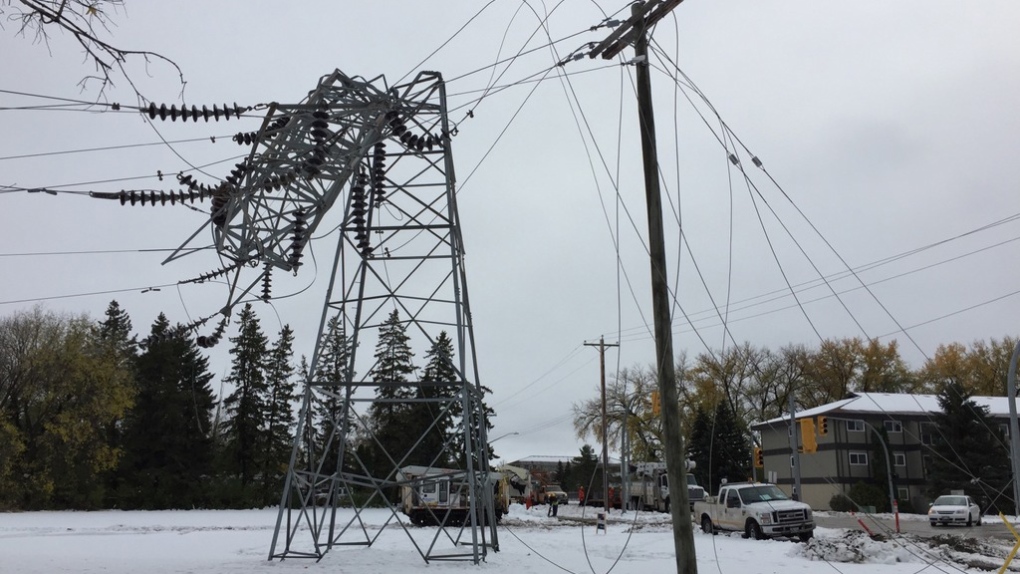 WINNIPEG -- There are still more than 20,000 customers in Manitoba experiencing outages, including many people in the city of Portage la Prairie, and several remote Indigenous communities. About 800 customers are still without power in Winnipeg.

Customers in Winnipeg still without power can expect it to take another four days before people can turn the lights back on, Owen said.

He said most people lost power early Friday morning – which means some people haven’t had heat for three full days.

In the Potage la Prairie area many hydro poles have snapped or toppled over. Entire transmission towers have also crumpled.

Manitoba Hydro said more than 1,000 wood poles have been broken and are in need of replacement in the Interlake – and another 1,000 in the areas surrounding Portage la Prairie.

“The damage is on a scale never before seen in Manitoba,” said Jay Grewal, President and CEO of Manitoba Hydro, in a release.

“We’re likely going to find additional damage once repairs begin. We estimate we may find almost another 1,000 poles that are damaged and need replacement.”

Owen said on top of the damage, the already wet ground from record rains in September is hampering efforts to repair power lines.

“Since electrification came to Manitoba more than a century ago. This is the worst outage we’ve experienced in this province,” he said Sunday.

Manitoba Hydro said the utility has used two helicopters to catalogue the damage from the sky. It said in some areas, complete rebuilds of entire parts of the electrical system is required.

Sunday a state of emergency in Manitoba went into effect. Premier Brian Pallister said this will help allow crews to get the equipment they need to access sites and make repairs.

The province has also invoked its ‘mutual aid’ agreements with neighbouring Canadian and U.S. utilities for support and additional materials.

“While Manitoba Hydro has a lot of this equipment already, the scale of damage means we need even more. Our neighbours have responded, and we and our customers are extremely grateful,” said Grewal.

The utility said so far, it has received help from the Saskatchewan Power Corporation, in the form of equipment and staff. It said help will also be arriving from south of the border – Minnesota Power is sending help to Portage la Prairie.

This is the first time Manitoba Hydro has requested help from other utilities.