Both police and Ste. Anne Mayor Richard Pelletier said the girl is from the community.

“It's not easy. There's no doubt everyone is talking about it. Thinking what could have been done," said Pelletier.

Ste. Anne police Chief Marc Robichaud said the collision happened around 4 p.m. Friday, and its police department is leading the investigation into what happened.

Robichaud said the girl was transported to hospital where she was pronounced dead.

Robichaud said ear buds were found near the scene, but it's too early in the investigation to determine if she was wearing them at the time of the collision. 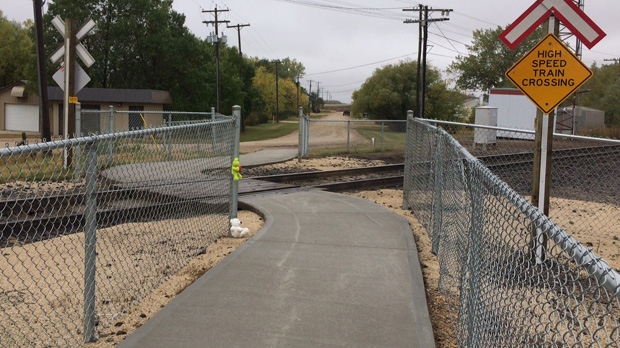 He said it's also not clear if the girl was lingering on the tracks or if she was simply crossing when the collision occurred.

In email to CTV News, Transport Canada spokesperson Jacquline Roy said the maximum train speed at that location is 60 MPH, or about 95 kilometers per hour.

On Saturday a spokesperson from CN Rail told CTV News the crossing was regulation compliant.

"Yesterday afternoon, a tragic accident occurred on CN tracks in Ste. Anne, Manitoba when a young female cyclist collided with a train at a pedestrian crossing. Our thoughts and prayers are with the family of the victim and the local community," said Jonathan Abecassis in a statement emailed to CTV News.

"Local police are investigating the circumstances surrounding this incident and are assisted by CN police," Abecassis added.

Transport Minister Marc Garneau said Friday his top priority is rail safety, and officials will work with CN Rail, the municipality and law enforcement in order to determine the cause of the collision.

"Any safety deficiencies identified through a possible Transportation Safety Board investigation or Transport Canada’s inspections will be addressed immediately," said Garneau in a statement released on Transport Canada's website Friday.

“It is with great sadness that I learned of the accident involving a young person at a railway crossing in Ste. Anne, southeast of Winnipeg. I would like to offer my heartfelt sympathies and prayers to the family and friends affected by this terrible accident."

Ste. Anne Mayor Richard Pelletier said the crossing was specifically designed to prevent a tragedy, and to increase visibility and awareness.

Pelletier said the sign, the turn in the sidewalk were all efforts to help people slow down and look around.

"The design was good we never thought something like this would happen based on what we did," Pelletier said.

Pelletier said the town will be looking at ways to improve safety to ensure no one else is killed.

Ste. Anne police Chief Marc Robichaud and the mayor said several years ago before the new design was put in place two pedestrians were hit and killed by trains. 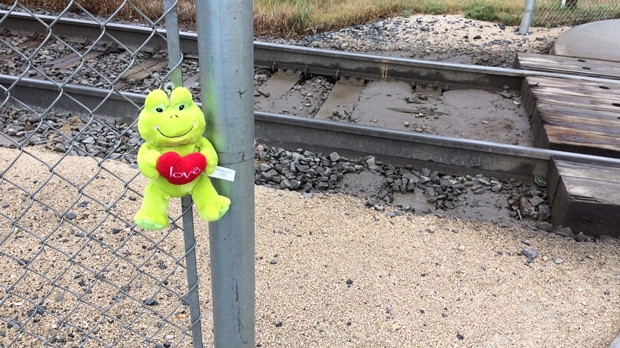 CTV News asked Transport Canada why there was a not a safety gate at the location.

“This crossing is only equipped with a reflectorized crossing sign. ‎ Under the Railway Safety Act and related Regulations, railway companies and road authorities (usually municipalities or provinces) are ultimately responsible for the maintenance and safety of grade crossings,” said spokesperson Jacqueline Roy.

“Grade crossings are evaluated on a number of factors such as the volume of road and rail traffic, the adequacy of sightlines along the road approach to a crossing, and any previous accident history.”

“The Government of Canada works closely with railway companies and communities across Canada to identify grade crossings that require safety improvements.”