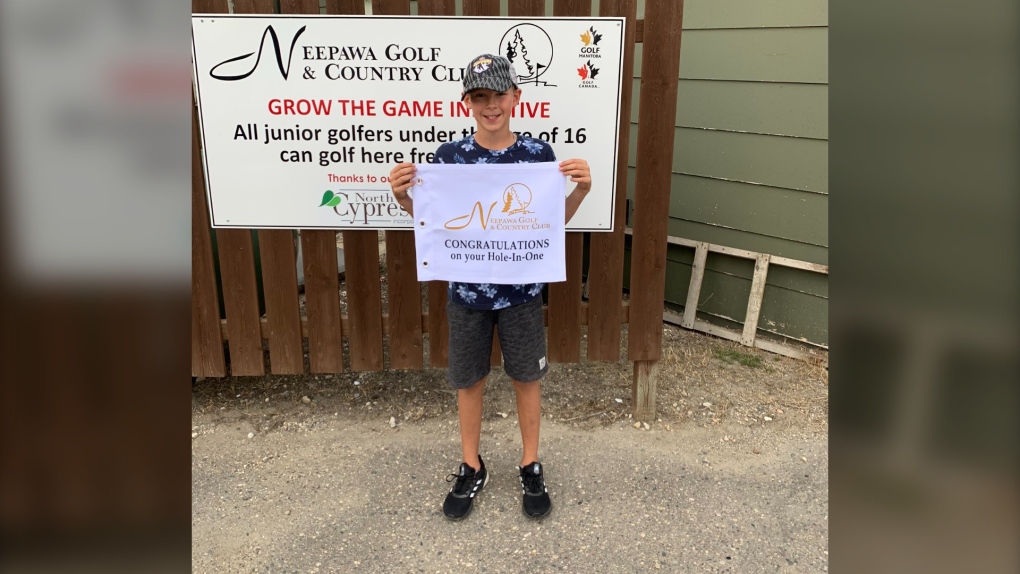 Ethan Stanley being recognized after hitting a hole in one. (Source: Neepawa Golf and Country Club/Twitter)

WINNIPEG -- Golf is a sport that has been played for centuries. It is a game that many people have tried at least once and one that can drive people crazy because of its difficulty.

But for one Manitoba boy, there was no frustration in his game on Sept. 5 as he accomplished a rare feat: a hole-in-one.

Ethan Stanley, who is 12-years-old and from Brandon, Man., was golfing with his dad at the Neepawa Golf and Country Club.

He said the pair came to the eighth hole, a par three, and started debating over who would get a bag of gummies given to them.

"Me and my dad made a bet who could put the ball closer (to the hole)," said Stanley, "He wanted (the gummies), but I said if he could put it closer then he could have it, and then I ended up getting it in the hole."

He said the ball hit the green, bounced off the hill, and then rolled into the hole.

Despite the amazing result, Stanley said the swing he took was the worst he had ever taken.

"I didn't know if I could get it there, so I swung as hard as I could. My feet moved way out of place, but it still ended up going pretty well."

He added this was his first-ever hole-in-one.

Afterward, Stanley said it was a pretty great feeling to sink the shot.

"(It was) kinda cool because my dad hasn't got one, and he's way older than me. So it's pretty cool that I got one before him."

GOLFING SINCE A YOUNG AGE

Stanley said he has been golfing for roughly six years and he enjoys playing the game.

The hole-in-one can be filed under the category of a good round and Stanley said he hopes to hit more in the future.

On top of getting the hole-in-one, Stanley said the reward, being the bag of gummies, was a great treat as well.