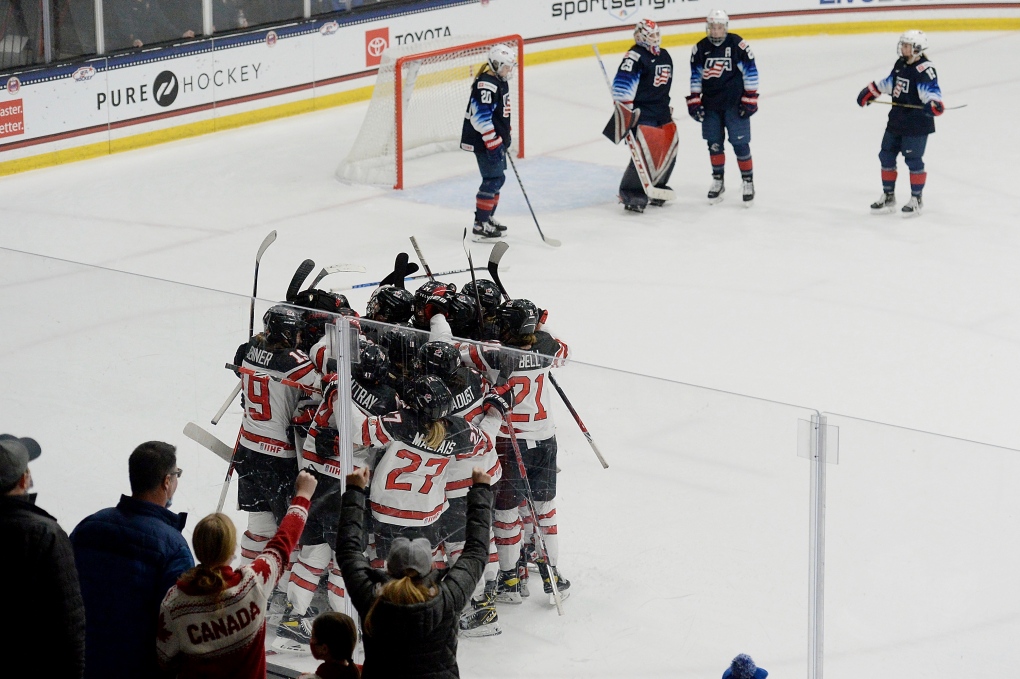 Members of Team Canada celebrate the game winning goal during the overtime period of a women's exhibition hockey game ahead of the Beijing Olympics, Friday, Dec. 17, 2021, in Maryland Heights, Mo. (AP Photo/Michael Thomas)

The nominations are in and three Manitoba women will be heading to Beijing as members of Canadian women’s hockey team.

Goaltender Kristen Campbell out of Brandon made the cut along with Ashton Bell from Deloraine and Jocelyne Larocque from Ste. Anne on defence.

All three women have competed internationally but Larocque leads the way in Olympic experience, with two medals to her name. She won gold in Sochi 2014 and added a silver at the Pyeongchang games in 2018.

She also has two gold, five silver, and one bronze medal from different IIHF Women’s World Championships since 2011.

Campbell got her first experience with the women’s national hockey team in 2019 and won gold at the 2021 IIHF Women’s World Championship as Canada’s third goaltender.

Ashton Bell made her debut at the same championship two years after she switch from playing forward to defence.

Gina Kingsbury, director of women’s national teams with Hockey Canada, said the women’s team has faced many challenges over the last few years but has “tackled the adversity” without distraction.

“We are beyond proud of how our athletes and staff have remained connected and overcome each challenge. We are thrilled with the team that will represent Canada and cannot wait to travel to Beijing and compete for a gold medal,” said Kingsbury in a statement.

Canada opens the tournament in preliminary action against Switzerland on February 3.