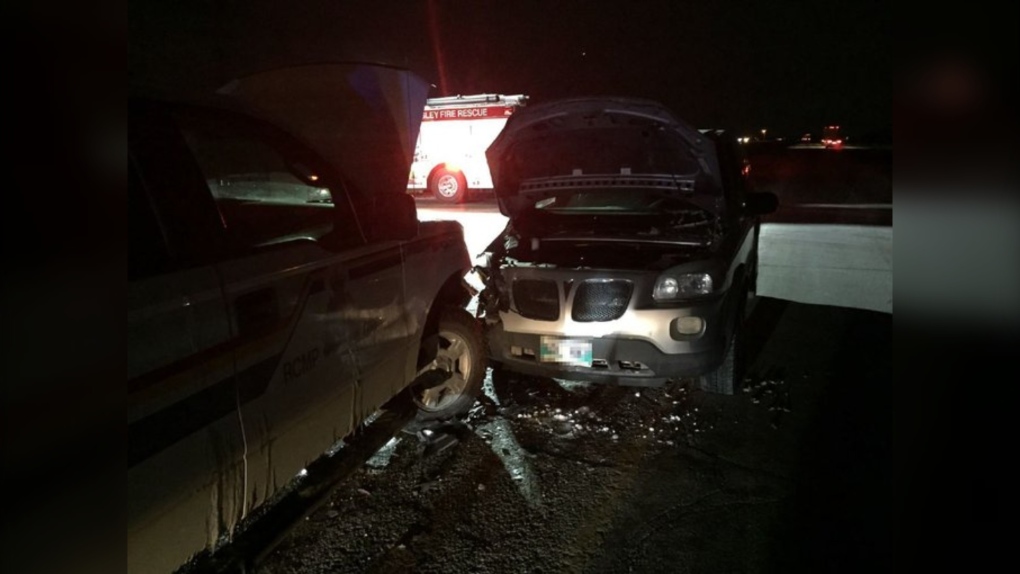 A minivan crashed into an RCMP truck on Wednesday. (Source: Twitter/RCMP Manitoba)

WINNIPEG -- An 84-year-old driver will be facing charges after a minivan crashed into an RCMP truck.

On Wednesday evening around 9 p.m., Headingley RCMP received a call about a minivan driving in the opposite lane of traffic along Highway 1 near Elie, Man.

RCMP said they received a number of reports that the minivan had nearly collided with other vehicles.

The responding officers attempted to use their emergency lights and sirens to stop the van, but the vehicle kept driving. One officer then blocked the lanes of traffic with his RCMP truck, but the suspect did not stop – colliding with the truck.

The 84-year-old driver from Winnipeg and the 44-year-old RCMP officer were both taken to hospital with minor injuries.

RCMP said there are charges pending against the driver.

RCMP are investigating the incident.

Yesterday at 9pm, RCMP responded to a vehicle travelling EB in the WB lane on #MBHwy1 near Elie. While police attempted to stop the vehicle, the 84yo driver collided with the #rcmpmb cruiser. The 84yo male driver & 44yo police officer were taken to hospital with minor injuries. pic.twitter.com/3hYAZW3OxM