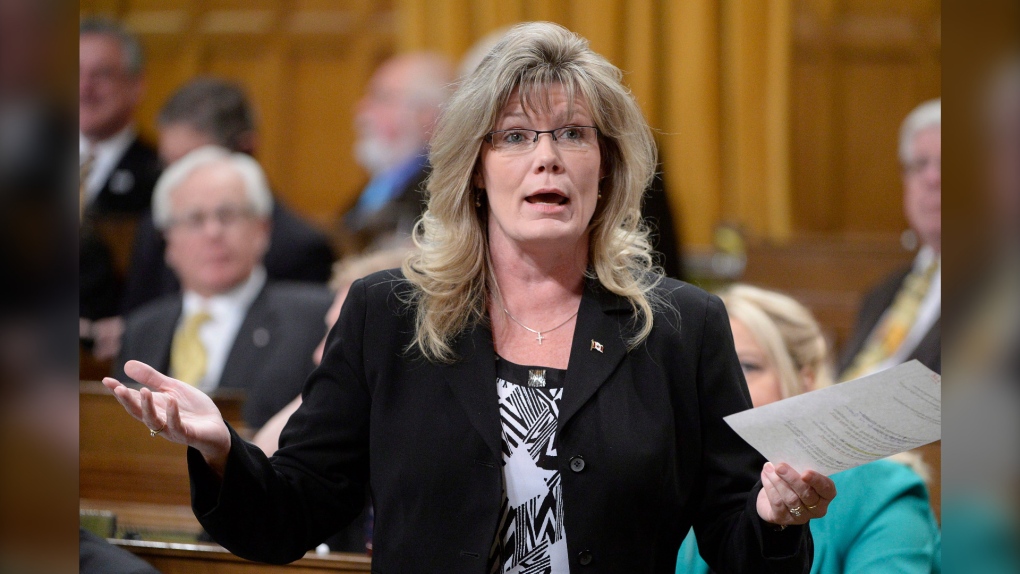 Shelly Glover answers a question during Question Period in the House of Commons on Parliament Hill in Ottawa, Monday March 23, 2015 . THE CANADIAN PRESS/Adrian Wyld
WINNIPEG -

Shelly Glover thought she had left politics behind when she walked away from Parliament Hill in 2015.

Six years later, she is vying for the leadership of Manitoba's governing Progressive Conservatives, who are to make their decision Oct. 30.

And while the former MP has promoted herself as a fresh face offering the party a rebound from low polling numbers, her stance on COVID-19 public-health measures and vaccines has caused some raised eyebrows.

Glover said she was drawn into the race to replace former premier Brian Pallister partly by what she calls injustice within the party.

"I became very concerned about the state of the party and the desire by some to not have a (leadership) competition," Glover said in a recent interview.

"I believe that our party is a grassroots party ... and that's not what I was seeing."

Glover, 54, is by all accounts the underdog. She doesn't have the wide caucus support enjoyed by the only other candidate, longtime provincial cabinet minister Heather Stefanson. And the leadership contest rules do not appear favourable to an outsider.

Glover had to work quickly to put together a campaign in time to meet tight deadlines set by the party, including selling 1,000 new or renewed memberships between mid-August, when Pallister announced he was stepping down, and Sept. 15. The requirements dissuaded some other potential candidates from entering the race.

Glover has overcome long odds before.

Born in Saskatchewan and raised in Winnipeg, her childhood involved turmoil that instilled in her an interest in justice, she said.

"I always have been that kind of person. It comes from my childhood, seeing my parents fight violently in my home, which is what eventually led me to be a police officer."

In a 2012 interview with CBC Radio, Glover recalled being a teen and seeing a pool of blood in her family's driveway after her mother stabbed her father.

A few years later, Glover was on her own and pregnant. She studied law enforcement and eventually joined the Winnipeg Police Service. She had a variety of duties, including undercover work, and later honed her public-speaking skills as a media spokeswoman for the force.

In 2008, she ran for the federal Conservatives and won in St. Boniface -- a seat that had been staunchly Liberal for 24 years. She was later elevated to cabinet in the Canadian Heritage portfolio and served as regional minister for Manitoba.

"I've got lots of experience negotiating tripartite agreements with municipalities, the city, the province ... I know how to negotiate to get things done."

Glover left office seven years later and returned to the police force, but resigned in 2018, citing a toxic work environment.

Glover and her husband have five children. In the early days of the COVID-19 pandemic, she signed up as a health-care aide and worked in a personal care home.

Since launching her leadership campaign, she has questioned some of the province's measures to try to slow the spread of the virus. Her stance has attracted support from some vocal opponents of public health orders.

Glover has said she is opposed to a requirement for health-care workers to be vaccinated or undergo frequent COVID-19 testing. She said there should be more leeway to ensure workers aren't barred from their shifts, which would cause more strain on intensive care units already stretched thin.

Glover has also raised questions about a requirement for people to be vaccinated to go to theatres, sports arenas and other venues. She said she wants to know how those decisions were made.

More recently, Glover has said health-care workers who have recovered from COVID-19 feel they could have natural immunity and may not need vaccination.

"Some of these heath-care professionals have talked to me about that, so let's talk about it ... let's look at it."

The Centers for Disease Control in the United States has a different take. It has said people who recover from COVID-19 should still get vaccinated, because those who don't are more than twice as likely to be infected again.