A rescue for two deer trapped on thin ice would be 'extremely dangerous': province 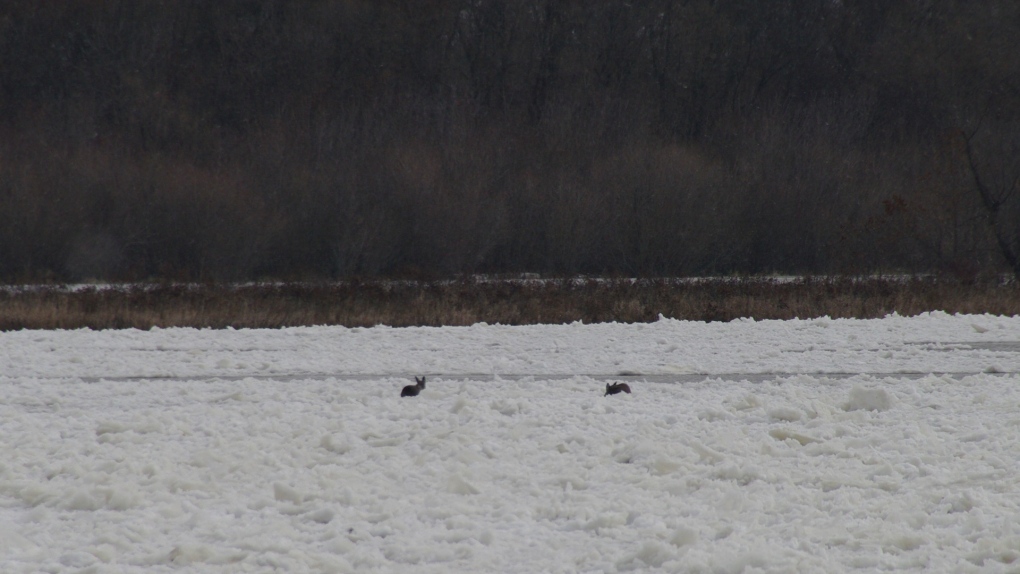 WINNIPEG – Two deer that found themselves stranded on the thin ice may be left at the mercy of the Red River, after the province said rescue efforts would be "extremely dangerous."

On Wednesday afternoon a sad sight caught the attention of people near Selkirk, Man. Two deer had wandered onto the middle of the frozen river. People in the area told CTV News that when the deer tried to move, the ice would crack and the deer would break through.

“This is absolutely heartbreaking,” said one person who saw the incident unfold, in an email to CTV News Winnipeg.

A spokesperson from the province said they are aware of the situation, but added “it would be extremely dangerous for people to go out on the ice.” They said the animals didn't appear to be in distress.

The plight of the deer on the river comes hours after the province issued a thin ice advisory for Southern Manitoba. Its message for people wanting to get out on the ice -- don’t do it.

“The Hydrologic Forecast Centre of Manitoba Infrastructure advises that many water bodies in southern Manitoba are still in the process of freezing over, ice is still very thin and larger rivers still have open water in some areas,” the province said in a news release. “Once full ice cover is achieved, levels of the Red River and other rivers in southern Manitoba are not expected to change much during the rest of this winter.”

The province said snowmobilers, skiers, and others should stay off rivers and lakes due to the danger of falling through.

Thin ice is often covered by snow, which can create weak spots because it insulates the ice, the province warned, adding fast-moving water will also have thin ice which may not be visible.

It said the ice conditions on the Assiniboine and Red Rivers may be dangerous until mid-December.

IF YOU’RE ON THE ICE, BE PREPARED TO GO THORUGH, LIFESAVING SOCIETY WARNS

The Lifesaving Society Manitoba is echoing the province’s warning, saying everyone should stay off the ice for now.

Dr. Christopher Love, the Water Smart coordinator with Lifesaving Society Manitoba, said record-high water levels in Manitoba this year could mean the ice could remain unstable throughout the winter. Love said before people venture out on the ice, they need to be prepared.

“Ice is never 100 per cent predictable. You need to be prepared. If you're going out on the ice, you need to be prepared to go through the ice and into cold water,” Love said. “You (should be) wearing something that is going to make you float if you go through the ice, so that could be -- although it sounds silly to many people -- wearing your life jacket in the middle of winter.”

Love said there are bodies of ice -- such as the Red River Forks skating trail -- that are considered ‘supervised,’ meaning a professional regularly goes out and measures the ice thickness. He said once they’re advised it’s safe to do so, Manitobans should stick to these areas.

Even with safety precautions, Love said ultimately people are responsible for their own personal safety.

Lifesaving Society Manitoba has broken down what thickness of ice is safe to be on.