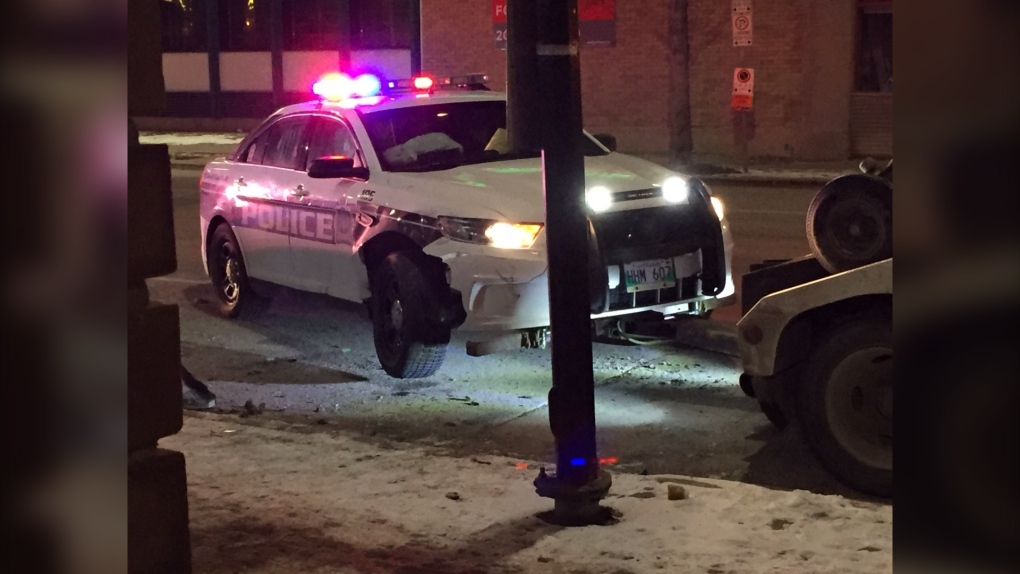 A police cruiser with damage to the front-end at Broadway and Langside. (Source: Gary Robson/CTV News)

WINNIPEG -- Winnipeg police officers say arrests have been made following a rash of crimes in November that include a shooting, a carjacking and a pepper spray attack.

On Nov. 2, police were called to the 300 block of William Newton Avenue for a report of a man who had been shot. Officers say a suspect fired three rounds from a shotgun, striking a man once. He was taken to hospital in unstable condition, but has since been upgraded to stable.

On Nov. 9 officers received a report about a carjacking by Sargent Avenue and Beverley Street.

Police said a man had made arrangements on social media to sell his car and agreed to meet a potential buyer. During the meeting, officers allege the person posing as the buyer pepper-sprayed the man and stole his car.

On Nov. 12 police saw two men in a stolen car near Portage Avenue and Good Street, and followed it to the area of Broadway and Langside Street.

Two general patrol units tried to stop the vehicle with their police cruisers, but say the driver of the stolen car rammed into both police vehicles.

The driver and the passenger tried to run away, with the passenger pepper-spraying the officers chasing after them. Police eventually caught up with suspects and made arrests.

Two officers were taken to hospital and treated for non-life threatening injuries.

This was one of three unrelated incidents on Nov. 12 where police cruisers were involved in crashes.

Mark Jaiantilla Galeos, 31, has been charged with a slew of offences, including four counts of assaulting a peace officer and discharging a firearm in a reckless manner. Police say he has been identified as the suspect in all three incidents, as well as two additional vehicle thefts.

Steven Andrew Mingo, 28, has been charged with a number of offences, including four counts of assaulting a peace officer and possession of a prohibited or restricted firearm.

They are both in custody. None of the charges have been tested in court.