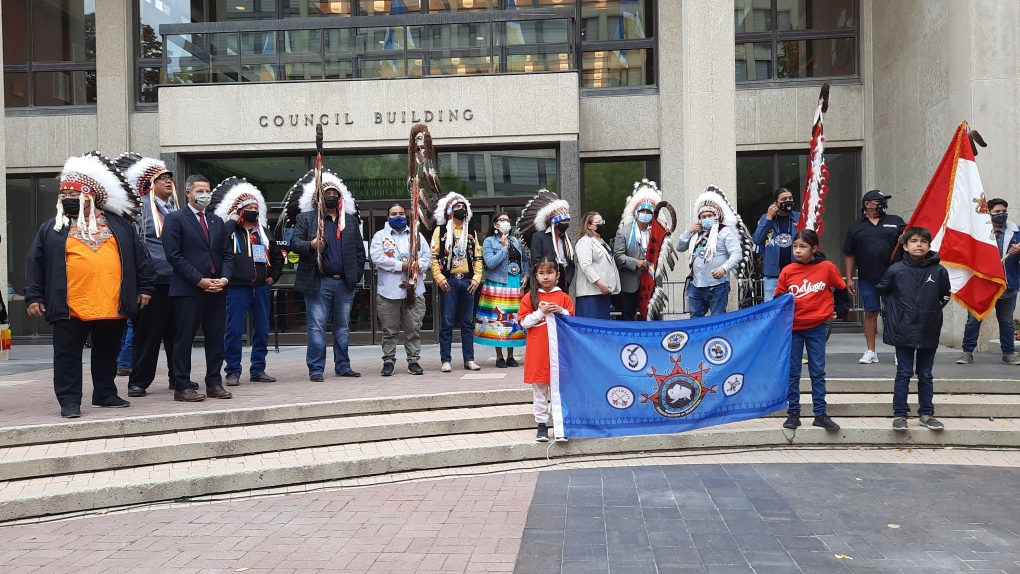 Three flags have taken their permanent positions outside city hall as a symbol of Winnipeg’s ongoing commitment to Indigenous reconciliation.

“We hope that the flags flying before city hall will be a visible statement of solidarity and respect,” said City of Winnipeg CAO Michael Jack.

In his opening remarks Mayor Brian described significance of the three flags. The white buffalo calf on the flag of the Dakota Nation of Manitoba symbolize sacred new beginnings.

Treaty One’s First Nation’s flag of a brilliant sun above a ground of blue and green reminds people the treaty will remain as long as the sun shines, the grass grows and the water flows. 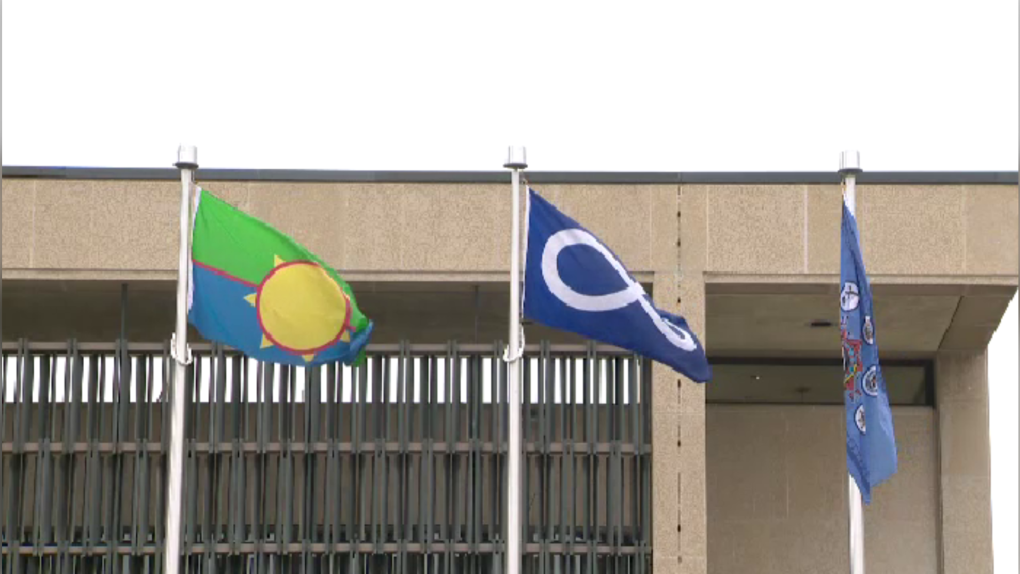 Metis, Treaty One and Dakota leaders were on-hand for the ceremonial flag raising, including Chief Dennis Meeches from Long Plain First Nation. He stressed the importance of everyone coming together, but said more work needs to be done.

“It’s been a long fight and a long journey for the treaty One Nations, Dakota Nations and Metis people but we celebrate the life our creator has given us, the blessings , even though we have struggled most of any people in this country,” said Meeches.

Grand Chief Arlen Dumas from the Assembly of Manitoba Chiefs reflected on his youth growing up in a remote and isolated community, and compared how far Indigenous reconciliation efforts have come.

“Here we are, light years ahead. I can tell you that I never would have imagined that we would be standing here together in solidarity, in light of the difficult history we’ve had,” said Dumas.

“It is a truly significant moment and to paraphrase our Dakota chiefs, this is what reconciliation really is, when we work together to bring forward in a meaningful way.”

Bowman said other reconciliation efforts are ongoing including the renaming of Bishop Grandin Boulevard. He also noted the economic reconciliation possibilities with the development of the property formally known as Kapyong and the city’s Indigenous Accord.

A toddler accidentally left in a vehicle for hours died Tuesday and police said his father was found dead in an apparent suicide at their Virginia home, police said.

Canada has signed an agreement to upgrade the NATO battlegroup it leads in Latvia to a brigade, a move that signals its commitment to the military alliance while continuing to resist calls to boost defence spending.

Researchers find llama's blood could hold key to 'super-immunity' against COVID-19, other viruses

Researchers suggest antibodies found in llama blood could lead to the development of a spray to immunize against COVID-19, SARS and other coronaviruses.

Canada's transport minister is speaking out about the 'unacceptable issues' that continue to result in significant delays. He says the federal government has done everything in its control to fix the issue.