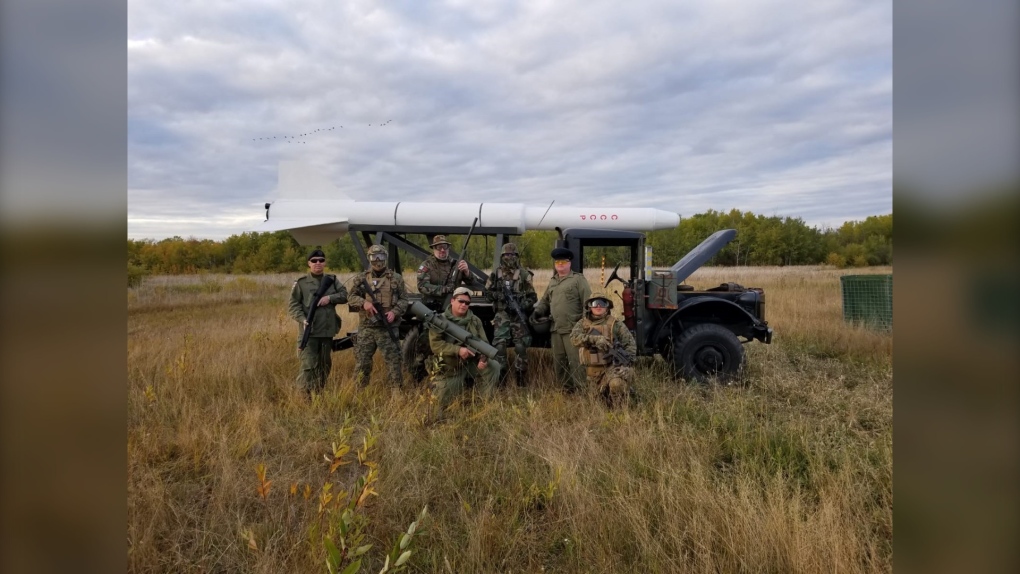 Airsoft enthusiasts in Manitoba are pictured in an undated image. The new federal handgun ban legislation has people who practice the hobby concerned it will have a negative impact. (Photo submitted by Daniel Gustowski)

WINNIPEG -- Airsoft, a live-action role-playing sport with replica guns, is concerned new firearms legislation in Canada could kill the industry.

The activity is similar to paintball, with teams competing against one another, but the guns themselves differ. Instead of shooting paintballs, the highly realistic looking guns shoot six millimetre plastic BBs.

“The bill would effectively make it illegal for us to even use our toys, that would cause hundreds of businesses and thousands of jobs to be lost,” said Daniel Gustowski, the Manitoba representative for Airsoft and part owner of Hop Up Heroes Airsoft Field.

Under Bill C-21, the federal government’s new firearms legislation, Airsoft guns would fall under a new definition of replica firearms and be prohibited.

The realistic-looking weapons can pose problems for police, as was demonstrated on Feb. 18, when Winnipeg police officers responded to a report of an armed man near Ellice Avenue and Furby Street. Police said the weapon in question turned out to be an Airsoft rifle, but the distinction could have been unclear to the responding officers.

Gustowski said the realism of the weapons is part of their appeal, but other countries have made stipulations requiring the guns to be modified with different colours so they are less realistic. The guns can be found online and in many large retail stores.

“Ultimately we want to keep our sport the way it is, but we are also willing to compromise if it comes down to that,” said Gustowski.

“I get it. They look dangerous, they look scary, they can intimidate in instances like that, but this bill is only going to take away law-abiding citizens’ form of fun and it won’t really do anything for the crime.”

A spokesperson for the Department of Justice said not all airguns would be prohibited under the proposed bill .

“The amendments to the Criminal Code in Bill C-21 only apply to unregulated firearms, such as airguns, that: 1) exactly resemble a regulated firearm; and 2) have a muzzle velocity between approximately 366-500 fps,” the spokesperson wrote in an email to CTV News Winnipeg. “These airguns would be prohibited for the purposes of importation, exportation, transfer and sale. It would not be a criminal offence to continue to possess these unregulated replica firearms.”

The spokesperson added that the bill is before Parliament, where potential amendments would be made.

The economic impact of Airsoft is substantial, with upwards of 50,000 players nationwide and growing. With all those people buying guns, accessories and gear, Gustowski said total sales for Canadian businesses are in the tens of millions of dollars.

The benefits don’t end there, he said. Some people use it as a form of exercise, others for a sense of community and good mental health.

“The positivity behind the community is unlike any sport I have ever played,” said Gustowski.

“You start off playing, with you wanting to play with toy guns that look realistic, and it ends off with you basically becoming part of the family.”