Alert Ready system worked but could use some fine-tuning, expert says 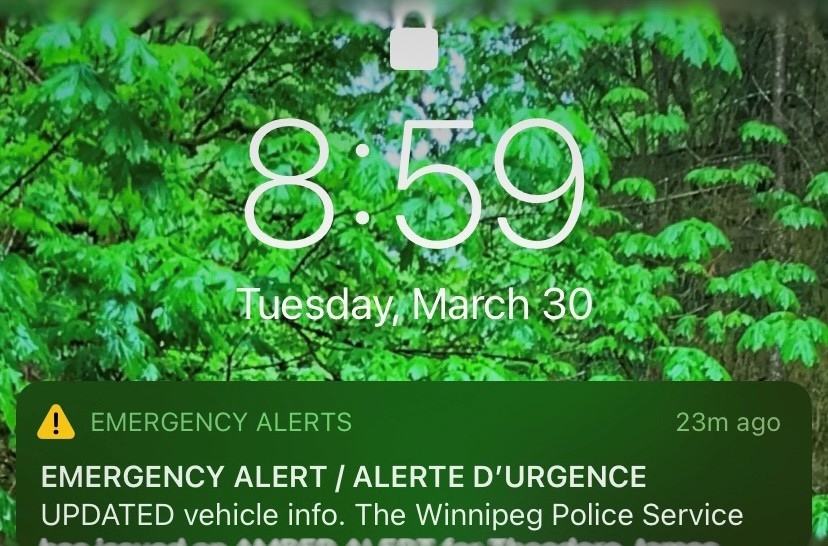 A screenshot of an Amber Alert that was issued on Tuesday night. (Source: Josh Crabb/CTV News)

WINNIPEG -- A mother has been charged after Winnipeg police issued an Amber Alert Tuesday night over an alleged parental abduction.

On Wednesday, police said the woman was charged with abduction where there’s no custody order and released her on conditions.

Officers said the Amber Alert worked but some say the alert system itself could benefit from some fine-tuning.

People province-wide received the emergency messaging on their phones, radios and televisions.

The Amber Alert went out just after 8 p.m.

The message flashed and rang on Kathy Gallant’s cell phone and across her television screen.

“I think it’s important, too, to get that message out to the public,” said Gallant. “Whether it be on your television but especially on your phone.”

Gallant was relieved to hear a toddler was returned safely to RCMP by his mother around an hour later.

“Just hearing it, it just shows that it worked,” she said. “I think it worked.”

The RCMP said officers from Ste. Rose du Lac got a notification to be on the lookout for the mother and child who may be headed to Ebb and Flow First Nation.

The Mounties said officers reached out to family members and then made contact with the boy’s mother who told officers she would go to the Amaranth detachment, about two hours northwest of Winnipeg, with the child.

Winnipeg police officers said from their point of view, the system worked the way it should.

“A lot of investigative minds were brought into this to make this decision,” said Const. Rob Carver of the decision to issue an Amber Alert. “It was made with the utmost care and we will do that every time we’re faced with a similar situation.”

Some people, however, didn’t receive the alert. Manitoba’s emergency measures department said that could be because their device isn’t compatible, they weren’t connected to an LTE network, didn’t have cell coverage or because their phone’s software may not have been up to date.

Jack Lindsay, an associate professor of Applied Disaster and Emergency Studies at Brandon University, said the system’s still relatively new and could benefit from some fine-tuning.

“People have to hear it and know what to do with that,” said Lindsay. “We want to use a warning system to provoke appropriate action and so there needs to be a lot of public education to go along with that.”

Lindsay said people outside of regions affected by weather warnings or Amber Alerts may be unsure how to react.

He said using technology to send messages geared to certain geographic regions could be beneficial in some cases like weather warnings but in others, province-wide alerts may be the way to go.

“That’s what Amber Alerts and disaster messages are,” said Lindsay. “They’re the important kind of messages you should be willing to be interrupted for.”

A spokesperson for the Alert Ready system said right now broadcasters and wireless providers are mandated by the CRTC to distribute alerts.

Alert Ready said other services such as streaming platforms and other connected devices can choose to connect to the system to distribute messages to their customers.

Messages Gallant said she doesn’t mind receiving, no matter when or why.

“Whether it’s a missing child or a missing adult I think it’s pertinent people get this information,” she said.

The messages are rare. Alert Ready said this is the first Amber Alert activation issued this year in Manitoba.

A spokesperson said people received two alerts Tuesday night because a second message was distributed by Winnipeg police to provide updated information to the public. They say some people may have received the same message twice due to a device having the reminder feature enabled which can cause an alert to repeat.