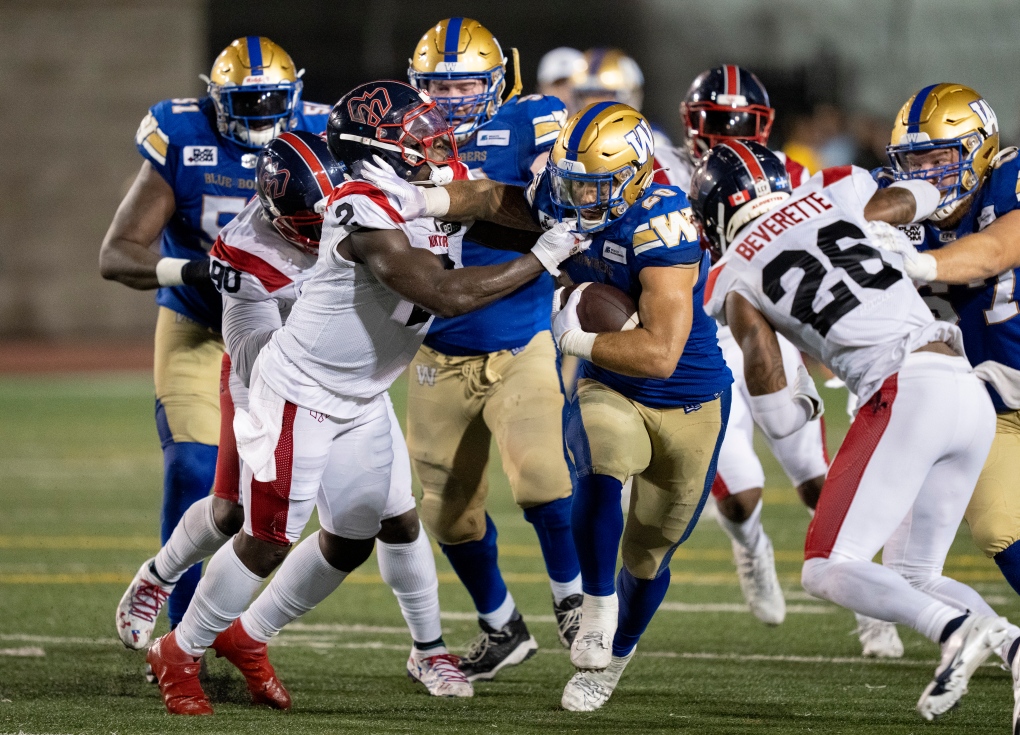 Zach Collaros admits he's got to brush up on his Winnipeg Blue Bombers' history, even though he's aware the team is on the cusp of tying a club record.

If the Blue Bombers (9-0) defeat the visiting Montreal Alouettes (2-6) on Thursday, they'll match the 1960 Winnipeg squad that opened the season with 10 straight victories.

The veteran quarterback was asked after Wednesday's walk-through how much he knows about the 1960 roster.

"Can you educate me a little bit on it," Collaros said with a smile.

Although he didn't know legend Ken Ploen quarterbacked that talent-laden squad, he's certainly heard of him.

"I need more books on historical, team stuff," Collaros said with a grin.

For the record, the team was coached by icon Bud Grant and included stars such as running back Leo Lewis and guard/defensive end Herb Gray. It lost Game 11 to Edmonton, finished the regular season 14-2 and was defeated by Edmonton 2-1 in the Western Conference's best-of-three final.

"A lot of time history repeats itself, but hopefully that's not the case here," Winnipeg-born receiver Nic Demski said with a smile, referring to the 1960 team opening strong but not winning the title.

The current Bombers are the two-time defending Grey Cup champions. Although they stress only keying on going 1-0 each week, Collaros acknowledged matching the 1960 team's 10-0 start would be noteworthy -- one day.

"If we're able to accomplish that, that would be something that in 20, 30 years when we're all talking to each other we'd look back on and be proud of," he said.

"But right now we're really focused on this game."

While the oddsmakers pick the Bombers to defeat the Alouettes in the rematch, last week's tilt between the two clubs was tied 14-14 going into the fourth quarter. Winnipeg then scored three straight touchdowns, including a 57-yard punt return by Janarion Grant, and won 35-20.

Collaros threw three interceptions and fumbled once in the game.

"I thought we had a pretty good week of practice. Guys are dialled in," he said.

"They realize that this is a pretty big task that lays up ahead and I think they're up for the challenge."

Montreal has one change to its roster. Defensive back Kenneth Durden goes in for injured Rodney Randle Jr.

Receiver Greg Ellingson is back on Winnipeg's roster after missing the past three games with a hip injury.

Defensive tackle Jake Thomas expects another battle against the Alouettes and predicts Winnipeg's defence will buckle down until the end.

"Fourth quarter, we pride ourselves on that being our best quarter," he said. "Defensively, I thought we had a really good fourth quarter and then we always know our offence can make a big play so that makes it easier."

The team can't focus on records or outside accolades, he said.

"I think where we're the most successful is when we just focus on the task at hand," said Thomas, who's played all 10 of his CFL seasons for Winnipeg. "Hopefully, we can keep this thing going."

The Bombers have their first bye week of the season after Thursday's game.

"We're all trying to put it in the back of our minds, but at the end of the day we all need it -- mentally and physically," Demski said.

"We don't want to trump that bye week with having bad thoughts, so we just want to go out there and finish this week strong, get this win and then enjoy bye week."

PLACE IN HISTORY: Six teams in CFL history have started 10-0. The league record is 12-0 by the Calgary Stampeders in 1948.

HOME FIRES STILL BURNING: Winnipeg's home win streak sits at 12 games (not including the playoffs). During those games, the team has outscored their visiting foes 331-162.

MINIMUM DAMAGE: The Bombers have committed six turnovers in their last three games, but opponents have only scored three points off the opportunities.

This report by The Canadian Press was first published Aug. 10, 2022.