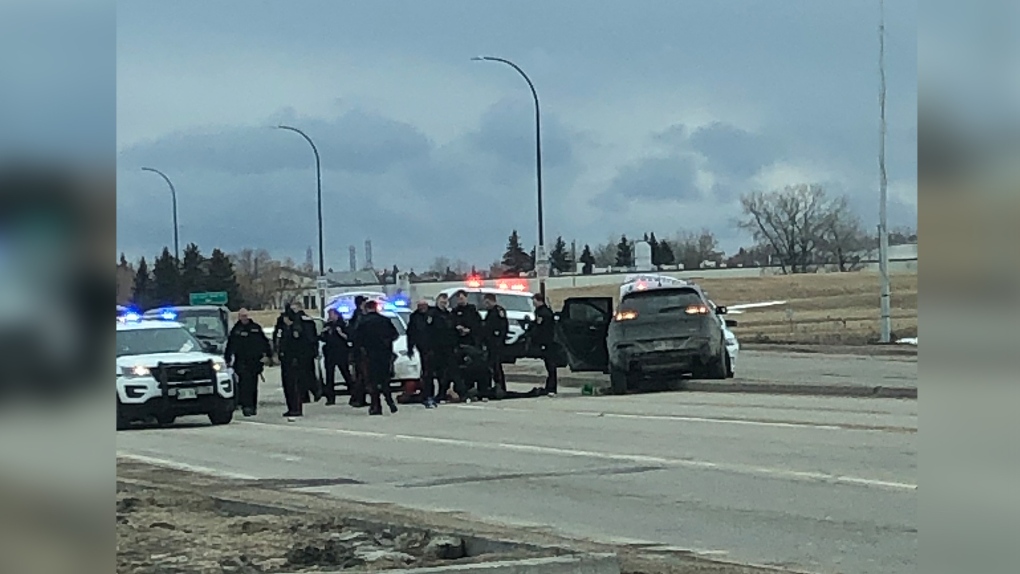 Police on the scene of an officer-involved shooting at Lagimodiere Boulevard and Fermor Avenue on April 8, 2020. (Submitted)

WINNIPEG -- In the wake of three fatal officer-involved shootings in Winnipeg, the Assembly of Manitoba Chiefs is calling on the Manitoba Police Commission to investigate the structural causes that led to these deaths.

Over the past two weeks, Winnipeg police officers have been involved in three separate shootings.

On April 8, police say 16-year-old Eishia Hudson, was fatally shot by officers following a vehicle pursuit and robbery at a liquor store.

A 36-year-old man died of his injuries after being shot by officers on April 9, while police say officers were responding to a domestic incident.

A 22-year-old man died after being shot by officers on April 18, after police say they were responding to a report of a gun call.

“On behalf of the entire Assembly of Manitoba Chiefs, I offer sincere condolences and heartfelt tribute to the families and Nations of the three young people who have recently lost their lives due to WPS officer-involved shootings,” Grand Chief Arlen Dumas said in a news release.

The AMC said the rates of First Nations involvement with law enforcement is the result of "deep-seated socioeconomic disparities within the community related to the history of colonialism in this country."

The Independent Investigation Unit of Manitoba has launched investigations into each of the incidents, along with the Manitoba Advocate for Children and Youth which announced it will be reviewing the death of Hudson.

Because the incidents involve fatalities, the IIU said it will be requesting a civilian monitor from the Manitoba Police Commission for each of the investigations.

But Dumas said the AMC does not have confidence in the IIU's investigation. CTV News was declined an interview request with Dumas, and was told he was unavailable for media commentary.

"In light of this non-confidence, the AMC is calling on the civilian oversight committee, the Manitoba Police Commission, to work with the AMC to develop a term of reference as well as assisting to retain an investigator under its mandate to investigate the Winnipeg Police Board for its monitoring of the relationship between First Nations and the WPS," Dumas said in a news release.

A provincial spokesperson from Manitoba Justice said the police commission does not conduct investigations as a part of its core mandate. They said the IIU investigates all on and off-duty police officer-related incidents in Manitoba involving death, serious injury, or alleged contravention of the Criminal Code or another federal or provincial law.

They added that the Police Services Act requires that the IIU be notified immediately when any of these incidents occur.

"Manitoba Justice uses restorative justice approaches that integrate cultural practices to help address the root causes of criminal behaviour and make our communities safer and healthier for everyone," the spokesperson said.

"The department also works with Indigenous communities and organizations—including the Manitoba Metis Federation, Assembly of Manitoba Chiefs, Manitoba Keewatinowi Okimakanak and the Southern Chiefs Organization—to enhance the use of restorative justice programs and ensure respect for, and alignment with, Indigenous traditions and culture."

The spokesperson said they cannot comment further because these incidents are currently under investigation.