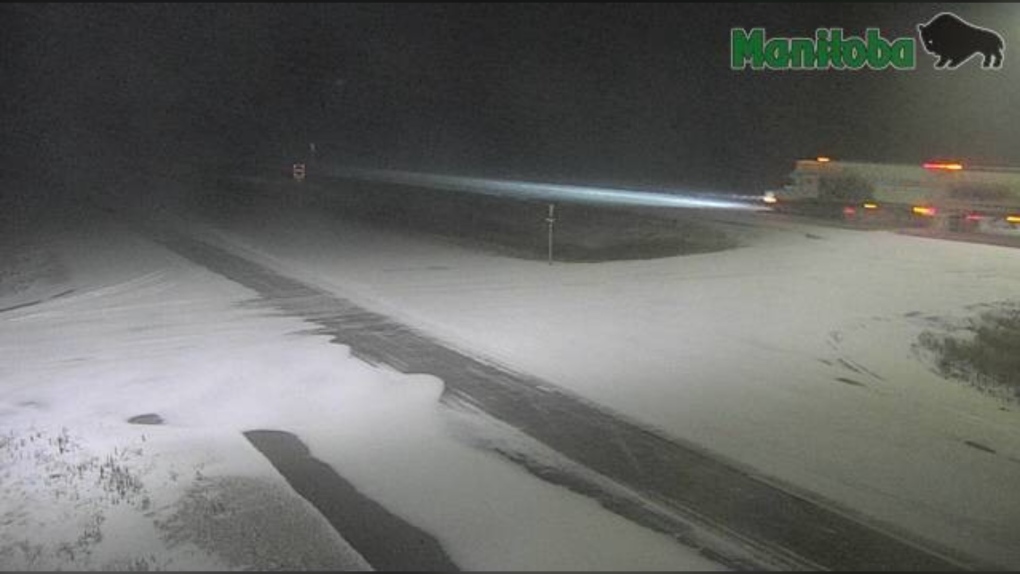 An image from Manitoba 511 showing conditions on the Trans-Canada Highway near Hadashville around 6 p.m. on Nov. 10, 2022. The province closed east and westbound lanes of Highway 1 from Falcon Lake to the Ontario border. (Source: Manitoba 511)

Most highways are now open to traffic after a bout of winter weather hit southeast Manitoba and forced some highways to shut down.

Shortly before 10 p.m., the province announced Highway 1 from Ste. Anne to Richer had closed due to poor winter driving conditions.

The highway had closed earlier in the evening from Falcon Lake to the Ontario border. Both these sections are now open to drivers.

Additionally, Highway 12 from Steinbach to the U.S. border remains closed, but Highway 52 from Highway 59 to La Broquerie reopened at about 12:40 a.m. on Friday.

It had issued earlier snowfall warnings at 4:25 a.m. on Thursday for a number of Manitoba communities, including Morden, Steinbach and Lac du Bonnet.

The statement says that southeast Manitoba could be hit with 10 to 20 centimetres of snow by Friday morning, with the far southeast corner potentially receiving more than 25 centimetres.

The weather agency notes the worst weather conditions will come in the late afternoon and overnight hours as there will be heavy falling snow, poor visibility and blowing snow.

The weather conditions will improve by Friday morning.

The forecast prompted Manitoba's transportation and infrastructure Minister Doyle Piwniuk to issue a reminder for drivers to keep the conditions in mind.

“Snowfalls in Manitoba can be challenging as travellers need to adapt their driving habits to wet and snow-covered roadway conditions,” Piwniuk said in a news release. “The province’s snow removal crews are surveying conditions in preparation to deploy equipment and clear highways. We urge all motorists to practise safe driving measures to ensure the safety of everyone on our roads.”

The province reminded drivers to keep an eye out and give lots of space to road-clearing equipment with the blue flashing warning lights. Drivers should not try to pass a snowplow while it is operating and should slow down when passing oncoming snowplows.

ECCC advises Manitobans to be prepared and adjust their driving to the road conditions. If visibility is reduced while you are driving, you should turn on your lights and keep a safe following distance from other cars.

ECCC says it may expand the snowfall warning to other nearby regions.