The Winnipeg artist behind the arctic wildlife murals that decorate a Wolseley back lane is hoping for some help on her latest project.

Kal Barteski was back painting in the community this week, but wasn’t focussing on garage doors as part of the ‘Back Alley Arctic’ she created along Canora Street in tribute to nature in the north.

Instead, she’s been painting a giant shipping container to be sent to the town of Churchill, Man., next week as a gift.

The community is close to her heart. In 2017 -- the year Churchill was lurched into crisis when the rail line in shut down after being damaged in spring flooding -- Barteski visited there to organize the SeaWalls Churchill mural festival, which transformed the face of the town.

She now wants to give back to the community that welcomed her by sending the container to Churchill full of donations.

She said one local organization has already stepped in to help.

"Winnipeg Harvest has given us 8 4x4 pallets of dried goods, which means we are almost full but we have a little bit of room for diapers, personal hygiene items, dog food, formula,” Barteski said. “Anything else that we can send to that community would be extremely helpful for them."

Barteski says she hopes people will drop off donations at the shipping container on Canora Street in Wolseley this Saturday during Nuit Blanche.

Donations can also be dropped off at North Flag on academy road, Goodwill on Portage Avenue and Hip Pooch on Corydon Avenue.

Barteski hopes the shipping container will be on the rail line to Churchill by Oct. 5. 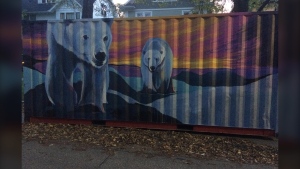 A work of art bringing goods to the north