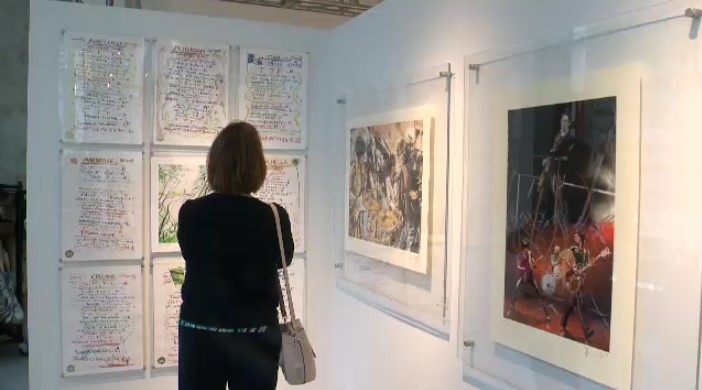 A new pop-up gallery in Winnipeg is highlighting the artwork of Rolling Stones' guitarist Ronnie Wood.

The gallery features nearly 50 of Wood’s pieces from 1987 to 2021, including interpretive portraits of his bandmates and a three-piece painting series called ‘Guitarscapes.’

“This is a rare opportunity. This is an exhibit that’s touring separate from the Rolling Stones ‘Unzipped’ exhibit, which is down at Portage Place,” said Kevin Donnelly, senior vice president of venues and entertainment with True North Sports and Entertainment, at the gallery on Tuesday.

“It resonated with us. It’s a first-ever opportunity in Winnipeg. It really is a big league, big market exhibition.”

Wood uses a variety of styles, influences and subjects in his work, which celebrates his musical heroes, the bands he’s been a part of, and the natural world.

“[Wood] was an artist and a painter and an art student before he was a musician,” Donnelly said.

“So this is a life-long passion of his and it’s something he’s been doing his whole career.”

The gallery, which opened on Tuesday, can be found on the lower level of 225 Carlton St., True North Square’s residential tower.

The Ronnie Wood Pop-Up Gallery will be open for walk-in and private viewings through the summer. Most of the pieces in the collection are for sale.

“These are one-of-a-kind. These are rare originals by a world-famous artist,” Donnelly said.

Winnipeg is the second Canadian city to host an exhibition of Wood's art.