As fall heads towards winter, it's time to think about how not to fall 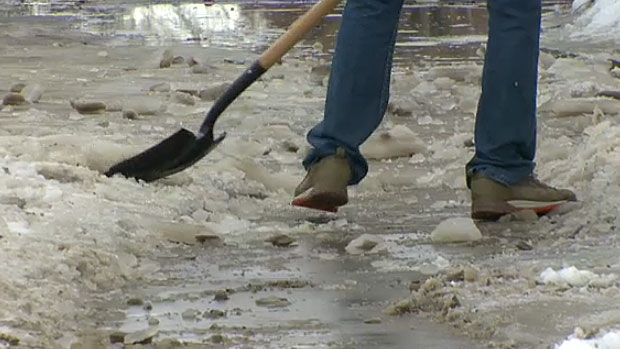 The falls are spread across all age ranges, but really start to hit serious numbers in the 50-plus age categories, according to the data, from the Canadian Institute for Health Information. (file image)

TORONTO -- Deep in the bowels of a building on Toronto's hospital row, some scientists are taking the fall for you, Canada.

In fact, over and over again. The researchers are slipping, flailing, losing their balance. It's all in the hope that someday you won't have to.

The work is being done in the winter lab of Toronto Rehab, a University of Toronto teaching hospital that is trying to hone in on what is the best possible footwear for Canadian winters.

The lab, a pod-like structure that looks like a component of the international space station, has an icy floor that can be tilted and made even more slick with pooled water or snow. As well, giant fans similate the wintry blasts that can knock us off our balance at times.

The goal of the work, explains Geoffrey Fernie, the institute's director of research, is to cut down on the number of falls on ice, which, depending on your age and the health of your bones, can be a life-altering or life-end event.

"In the winter we have up to five times as many people in our emergency rooms" for falls, Fernie says.

The numbers are significant. In 2010-2011, there were 7,138 people hospitalized across the country because of injuries sustained during falls on ice, says Vicky Scott, a senior adviser on fall prevention in British Columbia's injury research and prevention unit and the provincial ministry of health.

The falls are spread across all age ranges, but really start to hit serious numbers in the 50-plus age categories, according to the data, from the Canadian Institute for Health Information. About half the people hospitalized for falls on ice were 60 and older.

Interestingly, falls on ice cause more serious injuries than any single winter sport. In fact, injuries incurred in all winter sports combined don't account for as many hospitalizations as falls on ice.

It's important to note this figure represents only people who were admitted to hospital because of injuries they received during a fall on ice. People who were treated and released, treated at doctors's offices or in walk-in clinics and people who died at the scene don't make it into this count.

"So you could double or triple that number for the amount of people seen and released by the emergency department," suggests Scott, who is also a clinical associate professor in the University of British Columbia's School of Population and Public Health.

In seniors falls of any kind can be catastrophic. Bones weaken with age and snap more easily. A fall that will bruise a hip at 20 may shatter it at 80.

That's when life really starts to change rapidly. A U.S. study published in August showed that of more than 60,000 residents of long-term care facilities who were hospitalized with a hip fracture, slightly more than a third died within the following six months.

Of those who were not completely mobile before the hip fracture, half either died or became totally incapable of walking within the six months after the injury.

So clearly, not falling this winter should be a goal. But how do you achieve it during a Canadian winter?

Fernie and his folks at Toronto Rehab may someday soon have an answer to that question. Their search for the ideal sole for boots -- both in terms of material and treads -- is going well, he says.

It will lead, they hope, to a labelling system that will show consumers how much grip they can expect to get from the footwear they are purchasing. But they aren't there yet.

In the meantime, he and Scott offer some suggestions about how to stay safe outdoors during the cold and slippery months ahead.

For starters, stay active, Scott says. What you don't use you will lose, in terms of muscle tone. So seniors especially need to keep fit and work to maintain muscles and balance.

"Don't just shut yourself inside and stay sedentary. Then when you do go out, you will fall," she warns.

Be aware of your environment, Fernie suggests. Pay attention to where you are putting your foot down. Look for and avoid danger zones. "There's nothing worse than stepping onto a patch of ice that you've not noticed."

If you are using outdoor stairs -- Fernie would probably say stairs of any kind, they are a real hazard -- use the handrail. "Don't worry about looking like a sissy," he says.

Plan ahead. During a brutal winter, it can sometimes be hard to find road salt or sand to put on your walkway. Since it's clear winter is coming, buy some in advance, Scott says. She also suggests seniors line up someone to shovel their walkway and driveway.

Carry some traction with you. Scott notes that the City of Ottawa has a nifty program where residents are encouraged to fill small bags with grit the city provides at a number of centrally located "grit boxes." The idea is that if you see a slippery patch, you can help your fellow citizens by spreading sand or salt as you go.

Do your bit. In some municipalities, homeowners are required to clear the sidewalks in front of their homes -- a rule some observe more fastidiously than others.

Choose your boots wisely. We live in a land of ice and snow. Fashion boots are probably better off worn indoors rather than out.

Despite your best efforts, you may at some point this winter find yourself in the process of upending. It's hard to think fast enough to react in such circumstances. But if you can, try to break your fall, Fernie says. Because some falls are worse than others.

"Sacrifice anything to protect your head, because head injuries are obviously very serious," he says.