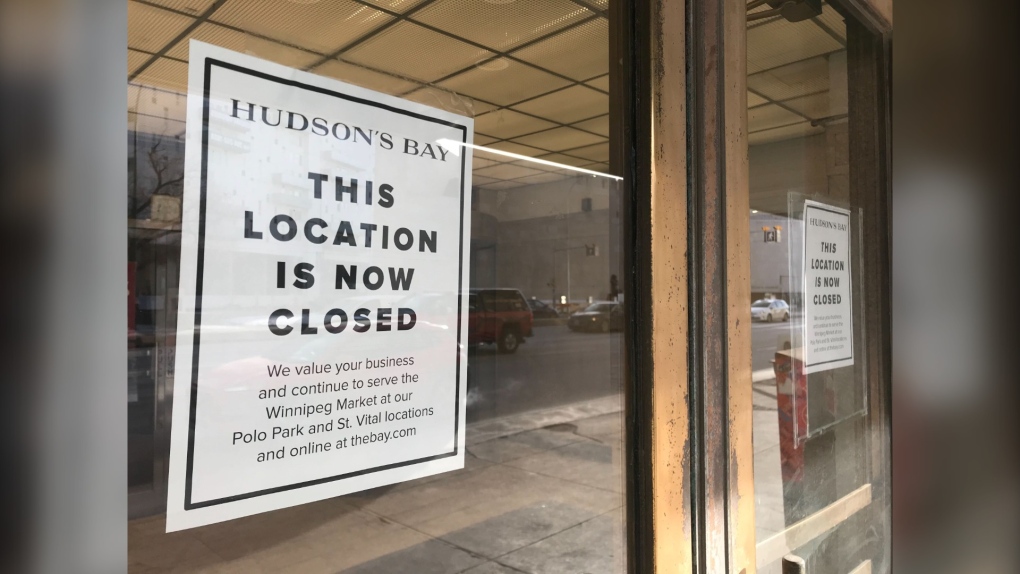 A closed sign outside of the Hudson's Bay store in Downtown Winnipeg. The store officially closed on Nov. 30. (Source: Josh Crabb/CTV News)

WINNIPEG -- The early closure of an iconic department store has left another hole to fill in downtown Winnipeg.

The loss of The Bay along with a growing commercial vacancy rate is being lamented by an area business owner and a downtown advocate.

“I’m sad to see it go,” said Aimee Peake, a shopper and owner of nearby Bison Books. “I think both the heritage of it and the convenience of having a big department store nearby is something that I’m going to miss.”

Once a destination for downtown shoppers, the doors have closed for good.

Opened back in 1926, the department store has been a fixture at the corner of Portage Avenue and Memorial Boulevard for the past 94 years but even before the pandemic business wasn’t what it used to be.

The closure, initially slated for February 2021 due to shifting consumer behaviours, happened sooner than planned.

“In light of recently announced restrictions on non-essential retail by the Government of Manitoba, we have made the decision to close this location,” Hudson’s Bay Company said in a statement.

An early shut down leaving yet another hole in a downtown decimated, in part by COVID-19.

“The pandemic has been challenging for businesses, especially for businesses downtown,” said Kate Fenske, CEO of the Downtown Winnipeg BIZ. “We have seen some closures this year, higher than we would see in years previous.”

Dealing with a decrease in foot traffic due in part to office workers staying home, Fenske said 32 businesses have closed in 2020, compared to 25 in 2019.

“This is a moment in time. It’s a longer moment than any of us could’ve anticipated or anyone wants to face,” Fenske said. “But we do still need to look at what’s on the horizon.”

Several major projects, a billion dollars worth, are underway or in development and 20 new businesses have opened downtown in 2020, Fenske said.

Shop owners like Peake at Bison Books are adapting and at times thriving, even though they’re currently restricted to online sales and delivery or curbside pickup.

“It’s been maybe two steps forward, one step back now that some places have closed because of the pandemic,” Peake said. “When it comes to retail the more businesses cluster, the more people come to the area.

“So, anytime you have a loss it will affect a number of people coming to the block.”

While confident her business will survive, Peake foresees short and medium-term challenges.

The vacant streets around her and the now-shuttered Hudson’s Bay store have her worried about how many neighbouring businesses will still be around in a post-COVID world.

“I hope that once the pandemic is over the office people will return to the downtown and there will be people to service and other businesses will open in those spots.”

As for The Bay, the future of the building is still to be determined and has already been the focus of intense debate.

The building received a historical designation in 2019, meaning certain aspects of it must be preserved.

For its part, Hudson’s Bay said it’s committed to working with partners to find opportunities that will be good for the community.