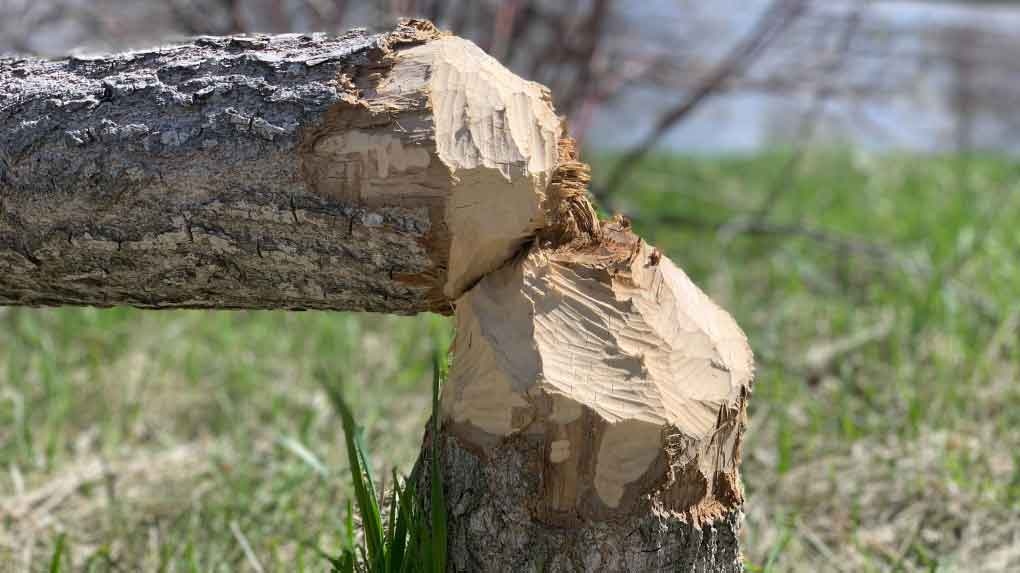 Trees Riverview is partnering with the city this month to save the trees in the area from the beavers. (Source: Jamie Dowsett/ CTV News Winnipeg)

Some busy beavers have been taking a toll on a Winnipeg neighbourhood's tree canopy, prompting a group of residents to work with the city to save the trees.

You may not see a beaver while walking along the river trail near Churchill Drive, but you will see the evidence that the tree-gnawing rodent has been at work.

"They have taken a significant number of trees down and they have taken large ones down," said Pam Lawrence, the treasurer of Trees Riverview, a community group working to protect public trees.

Trees Riverview is partnering with the city this month to save the trees in the area from the beavers' buck teeth.

"I think that a lot of Riverview residents have been calling in and have been quite concerned about the beaver damage," Lawrence said. "We're in such a trade deficit in our city anyway – it seems like why not protect any tree that we possibly can in public areas?"

Ken Allen, a communications coordinator with the City's Public Works Department, told CTV News the city is planning to work with the volunteers to wrap trees along Churchill Drive with sturdy wire such as hardware cloth or stucco wire.

"Tree wrapping prevents beavers from being able to access and chew on the trunk of the tree," Allen said in an email.

He said not all neighbourhoods require tree wrapping, as the number of trees wrapped each year depends on beaver activity, potential damage, and volunteer engagement "Wrapping is done in areas where beaver damage to trees can be limited through wrapping activity and often areas where volunteers are actively involved."

Tree wrapping, the Winnipeg Humane Society says, is a good way to deal with beavers and is highly encouraged.

"It's a great initiative to see the City of Winnipeg and community members come together to try and do what they can to prevent certain properties and trees from being damaged by beavers," said Brittany Semeniuk, an animal welfare specialist with the humane society.

She said the Winnipeg Humane Society has helped wrap trees in the past, as it is a humane alternative to culls or traps – methods of control the WHS has previously spoken out against.

"There really isn't a lot of harm done by doing these wrapping procedures. The beavers will either move to an area where they have more access to trees, or they will just move into a forested area to get access to trees."

Lawrence said Trees Riverview is planning to hold a tree wrapping event with the City of Winnipeg on May 28, depending on the weather. The city said wrapping a tree requires a full width of wire of 48” to be used as the height. The wire, which should not be chicken wire, must be wrapped loosely around the tree to prevent strangling the tree.

Emergency room delays to continue for 'quite some time,' doctor warns

An emergency room physician is urging governments to address the country’s shortfall of health-care workers in light of the recent temporary shutdowns of emergency departments and the staffing downsizing at others.