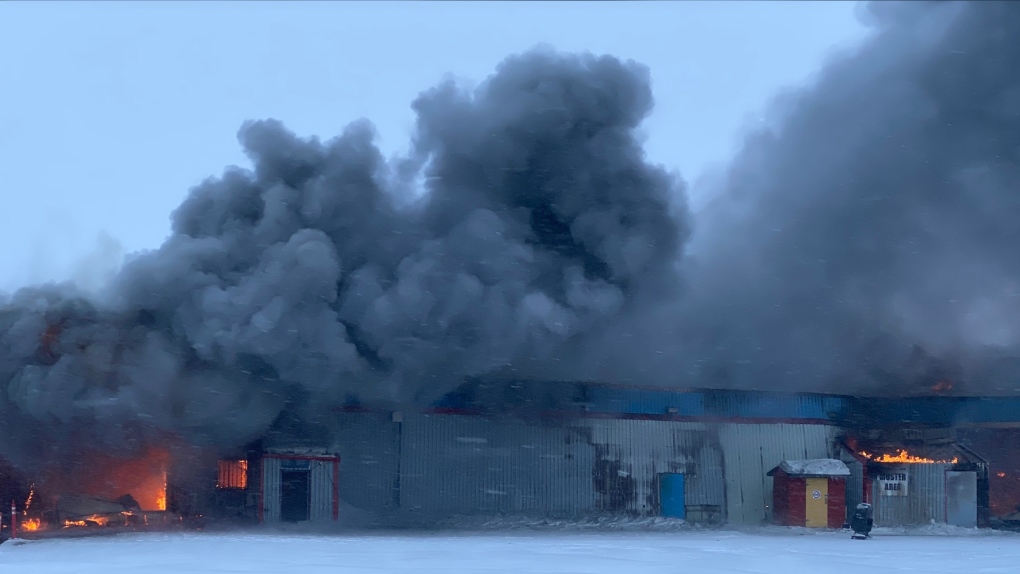 WINNIPEG -- A Calm Air cargo warehouse at the Churchill Airport went down in flames Wednesday morning in what’s believed to have been an electrical fire, according to the chief of the Churchill Volunteer Fire Department.

Fire chief E.J. MacCuaig, who works at the airport, said around 8 a.m. a Calm Air cargo worker knocked on his door to inform him about the fire. MacCuaig then went into town to get the volunteer fire department, who were on scene within 10-12 minutes.

The fire chief said upon initial inspection he found flames coming from a shed attached to the warehouse. Crews began to fight the flames on the building’s exterior and then breached the shed, only to find that’s not where the fire originated. Then the fire started to spread inside the warehouse itself.

“My belief is that the attic caught on fire and that was building while we were initially attacking the exterior of the building,” MacCauig said.

The fire chief said they continued to try to find the origin of the fire, but couldn’t, so he pulled his firefighters back to reassess and within three to four minutes the entire building was engulfed in flames.

“My guess is that the attic was burning, and it built and built and built to the point of flashover,” MacCauig said, noting flashover is when material burns to a certain point, especially in an enclosed space, and it gets so hot that all of the material hits ignites at the same time and everything goes on fire at once.

“At that point we didn’t have the resources to fully attack it as an offensive fire, so I had to pull back and just let it burn. It wasn’t impacting anything at that point and it would’ve been dangerous to put firefighters inside the building,” he said.

MacCauig said the fire burned itself out by noon and firefighters were on scene until 4 p.m.

“Once it gets to a certain point we can’t fight it anymore,” he said, pointing out that the volunteer fire department only has two firetrucks with 1,000 gallons of water on each and that there are no fire hydrants at the airport.

The cause of the fire is under investigation, but early reports show it was likely electrical. Inside the warehouse was materials that get shipped north, along with equipment.

As for the weather, MacCauig said fighting fires in the winter is difficult because everything freezes, and that they have to rotate to the crew to give them time to warm up. He also said there were 50 km winds fanning the flames.

CTV News Winnipeg has reached out to Calm Air for comment.