A 10-year-old Manitoba boy received one of the most precious gifts last week – the gift of sight.

Last week Benny, his mother, Jenna Cason, and his aunt, Amanda Vitt, travelled to Toronto to get fitted for eSight glasses.

"I put them on and it was like I could see completely clearly, I could see the white in the eyes," Francey said. 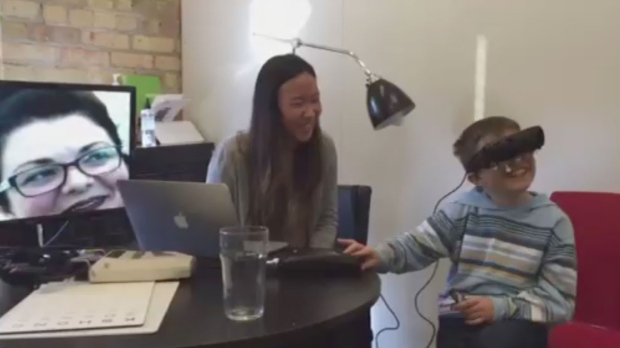 “He looked at Jenna and myself and said ‘wow’, he giggled and had the biggest smile on this face,” said the boy’s aunt, Amanda Vitt. “He just stared at us.”

The rare condition means Benny sees with 20/400 vision, according to a GoFundMe page for the boy. Benny wears glasses which help him see colours, shapes and silhouettes, but, they do not help him see details like words on a page, facial features and such.

The GoFundMe campaign was organized by Vitt in order to help raise money for the eSight device which costs $20,000. The device is a wearable, hands-free headset that uses a high-speed camera to capture everything the user is looking at, the GoFundMe page said. The video is then sent back to the headset and shown on LED-screens in front of the user’s eyes.

“As you can imagine this kind of technology is expensive, however, if it will allow a child to see their mothers face for the first time, the detail of a flower, or read his favorite book, then it is most definitely worth every penny,” Vitt said on the GoFundMe page.

In a few weeks, Benny will get his new vision aid. He still needs to learn how to navigate and zoom in and out with them, Vitt said.

“Hard to fathom that we would reach our goal, that we made our goal and went to Toronto,” Vitt said during a phone call with CTV News on Sunday. “[The glasses] worked almost immediately so it was an incredible experience for us and Benjamyn.”

Benny's family said with clear eye sight, he will get to do many things he has dreamt of all his life.

"There is someone who flew a plane with them which is pretty amazing but I just hope Benny can ride a bike and have the confidence to do so," Jenna Cason, Benny's mother said.

The family intends on using the remainder of the money on horseback riding lessons for Benny’s brother, Ashton, who has virtually no vision and was diagnosed with autism and OCD. They are continuing to raise money for Ashton.