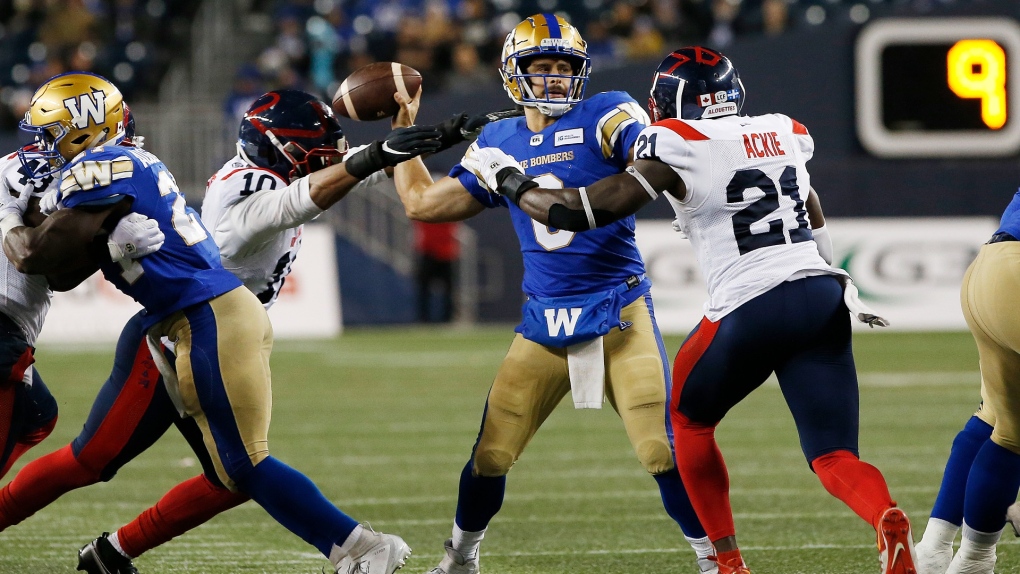 Zach Collaros threw for 280 yards and a pair of touchdowns as the Winnipeg Blue Bombers stayed perfect at home this season by defeating the Montreal Alouettes 31-21 in a seesaw battle Saturday.

The Bombers have already clinched first place in the West Division and will host the division final Dec. 5. Montreal (6-6) got a playoff spot when the B.C. Lions lost to Hamilton Friday night.

The teams play a rematch in Montreal next Saturday and Winnipeg finishes the regular season on the road in Calgary.

Bombers middle linebacker Adam Bighill intercepted Montreal quarterback Trevor Harris with 1:54 left to go in the fourth quarter and the Als on third down with three yards to go.

Newly acquired Winnipeg kicker Sergio Castillo then connected on a 47-yard field goal with 1:23 remaining to make it 31-21. Bombers defensive back DeAundre Alford capped it off with another pick of Harris with 54 seconds left.

Collaros, who went 21-of-33 passing with no interceptions, threw a 10-yard TD toss to receiver Nic Demski and a 24-yarder to Drew Wolitarsky. Backup quarterback Sean McGuire pushed in for a two-yard TD.

Harris, making his first start since being traded from Edmonton last month, was 14-of-25 passing for 177 yards with two TDs and two picks.

CFL-leading rusher William Stanback had 16 carries for 106 yards, taking the Als running back over the 1,000-yard mark for the second straight season. He has 1,066 yards.

Demski's TD at 6:24 of the first quarter came after a fumbled snap on a Montreal punt that had Winnipeg starting at the Alouettes' 33-yard line.

On Montreal's next possession, Bombers running back Brady Oliveira fumbled and Davis picked up the ball and ran into the end zone at 8:13 to tie it 7-7.

After the Als gave up a single on a missed Castillo field-goal try, Stanback rushed for 40 yards in a Montreal drive that ended with White's six-yard TD catch.

Montreal's first possession of the third quarter ended with a TD toss to a wide-open Wieneke at 2:25. Quan Bray had a 39-yard reception to aid the scoring drive.

The Alouettes' defence kept bringing pressure and forced the Bombers to punt on their next two possessions, but then Winnipeg got back-to-backs TDs from Wolitarsky at 10:08 of the third and McGuire 29 seconds into the fourth.

A 48-yard Castillo field goal was negated by Bomber procedure penalty, forcing the team to punt instead of picking up three points with seven minutes remaining in the third.

Winnipeg's defence turned up their aggression in the fourth quarter, sacking and swarming Harris.

This report by The Canadian Press was first published Nov. 6, 2021.