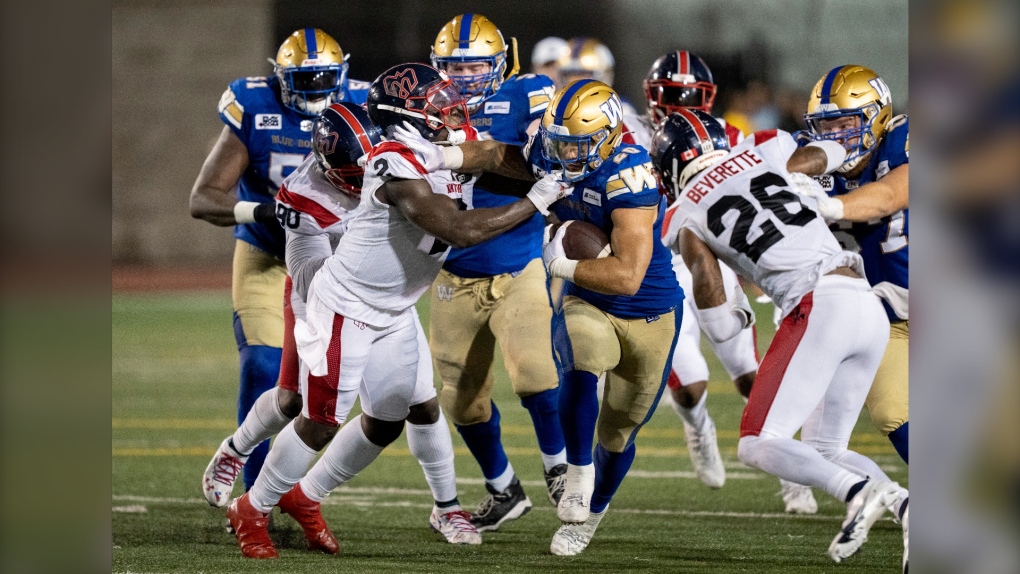 Tied 14-14 with 9:20 remaining in the game, the Bombers (9-0) powered through with three straight touchdowns to put the game out of reach.

Dakota Prukop scored on a one-yard sneak, and then Janarion Grant threw a cold shower on the home crowd with a 57-yard punt return. Brady Oliveira sealed the victory with a late six-yard rush.

The Alouettes (2-6) shocked the Bombers on the first drive of the game when Wesley Sutton intercepted Collaros and instantly placed Montreal in scoring position.

However, Winnipeg's defence limited the damage to a field goal. David Cote placed a 24-yard attempt through the uprights for an early 3-0 lead.

Cote followed that up with a 49-yard field goal to cut the Bombers' lead to one.

The Alouettes handed Winnipeg a chance at a touchdown with a pyramiding penalty on a field goal attempt, giving the Bombers a fresh set of downs. Collaros notched his second TD of the night with a five-yard pass to Rasheed Bailey.

Tyson Philpot helped Montreal tie the game on the next drive. The rookie returned Winnipeg's kickoff 60 yards and then two plays later, caught Harris' pass in the backfield and swerved through the defence to score Montreal's first touchdown. Dominique Davis rushed the two-point conversion, bringing the score to 14-14.

Grant returned Montreal's punt for 57 yards all the way into the end zone for the visitors' fourth touchdown of the night.

The Bombers closed their fourth quarter domination with a six-yard rush by Oliveira.

The Alouettes added a late touchdown when Davis found Reggie White Jr. with a 20-yard pass.

This report by The Canadian Press was first published Aug. 4, 2022