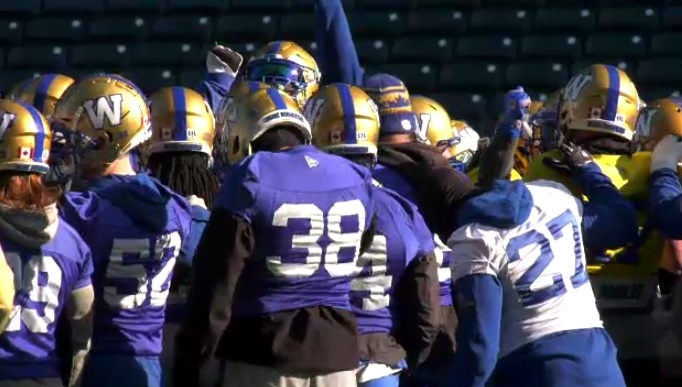 The Winnipeg Blue Bombers practice head of the West Division Semi-final against the Calgary Stampeders.

WINNIPEG -- The Winnipeg Blue Bombers are helping ensure families in Manitoba are fed with a new campaign.

The CFL team announced the launch of a new t-shirt campaign, and are asking fans to select the winning design, which will be sold at the Bomber Store. All net proceeds from the shirt will go directly to Winnipeg Harvest.

“The sale of these t-shirts will help fund 1,000 emergency food hampers a month for hungry Manitobans who need it the most,” said Keren Taylor-Hughes, Winnipeg Harvest CEO, in a news release.

“In a time where our community needs our help more than ever, we know that Bomber fans will embrace the task of choosing a design and purchasing a t-shirt to support Winnipeg Harvest,” said Winnipeg Blue Bombers President & CEO, Wade Miller, in a news release.