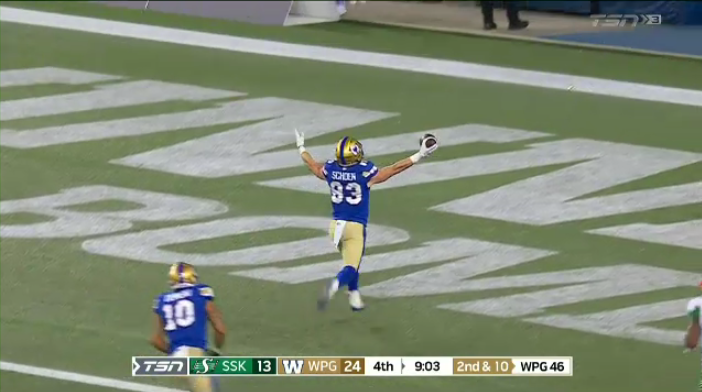 Schoen scored his 11th TD of the season, which set a CFL record for a rookie receiver. (Source: TSN)

WINNIPEG -- Linebacker Adam Bighill relished the way the Winnipeg Blue Bombers defence bounced back from their worst performance of the season.

The defence forced six turnovers to key a 31-13 victory over the Saskatchewan Roughriders before a sold-out crowd of 33,234 fans at IG Field on Friday night.

Winnipeg, which had given up 48 points in a loss to the Hamilton Tiger-Cats two weeks ago, forced three turnovers on downs, a fumble and grabbed two interceptions to improve to 13-2 and clinch a home playoff game in the West.

"Our efficiency was pretty good," Bighill said. "I mean, we had (Riders quarterback) Cody (Fajardo) running all over the place. We made some big plays on third down, got some takeaways, which we've lacked in the last little bit. That's much more up to par."

Defensive backs Jamal Parker and Evan Holm picked off passes from two different quarterbacks while the Bombers stuffed Saskatchewan on two third-and-short gambles. The third turnover on downs was due to an incomplete pass. Safety Brandon Alexander also recovered a Fajardo fumble.

"That's exactly what we talked about before the game and to come out here and execute, you can see what that does for the game, what it does for our offence, see what it does for field position," Bighill said. "It's a huge deal. That was much more to our satisfaction."

The 42-yarder to Demski and 64-yarder to Schoen in the fourth quarter salted the game away.

"It's huge scoring touchdowns," Collaros said. "It's kind of the name of the game, especially with a defence like ours that was really rolling tonight. Being able to make (it) a two-score football game really changes the way you get to call a game. The defence was great all night, as was the special teams."

Schoen scored his 11th TD of the season, which set a CFL record for a rookie receiver.

"That's not really something I think about or have given thought to," he said. "It's an honour and it's really humbling to have that happen and it's really special in hindsight."

Saskatchewan fell to 6-9 but remains in the crossover playoff picture.

"We did some good things tonight," said Fajardo. "We left a lot of plays on the field. We missed some plays, turned the ball over, stuff you can't do against the defending Grey Cup champs in back-to-back years.

"We know what we have in that room. We moved the ball well. We talk about it every time we play these guys. They clamp down when we get into the red zone and make it very difficult for us to score touchdowns. We kick some field goals and that's not how you win against them."

Fajardo completed 26-of-38 passes for 307 yards and had one interception. He also ran for a seven-yard TD.

"I didn't make plays when they had to be there," Fajardo said. "I dropped a snap, which I've never done in my career. Those are tough things to do when we're in the red zone. There's a lot of plays that swing the momentum. We got stuffed twice on third-and-one."

Riders head coach Craig Dickenson was encouraged by giving Winnipeg a scare when Saskatchewan closed to within 17-10 after Fajardo ran for a seven-yard touchdown.

"I thought we played a championship-calibre team pretty well tonight," he said. "Midway through the third, I think everyone thought we had a chance to beat them, including our own guys. We let it get away on a couple of big plays here and there. But that's a good football team and they know they played a good football team tonight, and I think we gained some respect across the room tonight."

Riders kicker Brett Lauther connected from 14 yards to close the deficit to 17-13 in the fourth. He also converted on a 25-yard field goal in the first and hit the extra-point after the team's lone TD.

The Riders, who are set to play the Tiger-Cats in Hamilton Oct. 7, see it as a must-win contest.

"Hamilton's a win-or-go-home mentality for us," Fajardo said. "If we win this game, we kind of control our own destiny a little bit. So, this is a playoff game for us to make the crossover. I think Hamilton knows that and it's gonna be a playoff atmosphere. We're excited about the opportunity."

This report by The Canadian Press was first published Sept. 30, 2022.

NEW | 'Not looking for a fight' but nothing off the table when it comes to Alberta sovereignty act: PM Trudeau

A massive Ontario-wide investigation into child exploitation has led to more than 100 people being charged, police announced on Wednesday.

Statistics Canada says there were 2.8 million fewer commuters in 2021 than in 2016, as the pandemic drove a shift toward remote work.

Danielle Smith has gone straight from the political altar to a divorce from common sense – and her out-of-the-gate antics suggest she could soon claim the title of Alberta's briefest premier, Don Martin writes in an exclusive column for CTVNews.ca.

In the wake of southern B.C.’s first major snowstorm of the season, more than 100 schools in Metro Vancouver and the Fraser Valley are keeping their doors closed Wednesday.

A member of the Royal Family's household has left her role after making 'unacceptable and deeply regrettable' comments about race and nationality to a woman at a grand reception at Buckingham Palace, a spokesperson said on Wednesday.

The verdict is in: A four-day work week is good for business. After six months, most of the 33 companies and 903 workers trialling the schedule, with no reduction in pay, are unlikely ever to go back to a standard working week, according to the organizers of the global pilot program.

Not to be a Debbie Downer but Canada will be without some iconic snacks for the foreseeable future after Little Debbie was forced to pull its sweet treats from store shelves across the country.