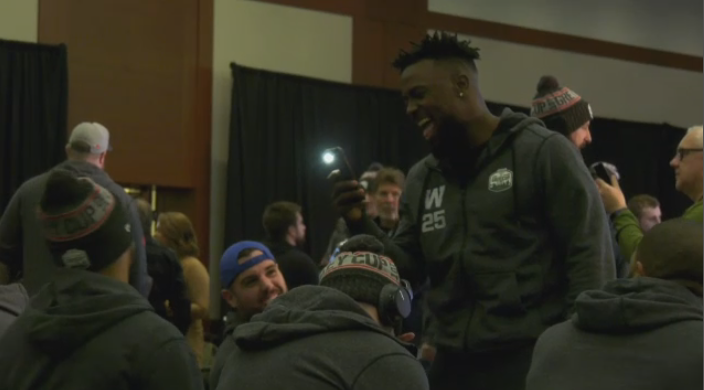 CALGARY — It’s the biggest football game of the year. So it’s only fitting that the week leading up to it is the busiest week on the CFL calendar; full of practices and game planning, award ceremonies, and media appearances.

“Man it’s been crazy,” said rookie defensive lineman Jonathan Kongbo, who’s experiencing Grey Cup week for the very first time. “But I’ve just been trying to be around the older guys, and some of the guys that have been here. And kind of the message they’ve been reiterating to me has been, ‘Enjoy it’, because you never know when you’re going to be here again. So I’ve just been trying to take in every moment, soak it in.”

The product of Surrey, BC says his quarterback sack on Bryan Bennett in the fourth quarter of the West Division Final to hold Saskatchewan to just a field goal was the biggest play he’s made in his CFL career.

“Just going through the play, Willie told me, ‘hey this might be it, this might be it’,” he said. “So the whole time he’s in my ear, and the reads happened and I just happened to make the play.”

Darvin Adams is a veteran of seven CFL seasons, but this is his first trip to the Grey Cup. His 63-yard catch in the West Final led to the game’s only touchdown.

“Zach is a good quarterback,” he said.” I don’t think it’s hard to develop any chemistry when you’ve got a good guy like that, and you’ve got the guys that are blocking around him.”

Winston Rose is in his third season playing in Canada, and led the league with nine interceptions in the regular season, adding one more against Saskatchewan. He’ll also be playing in his first Grey Cup this Sunday.