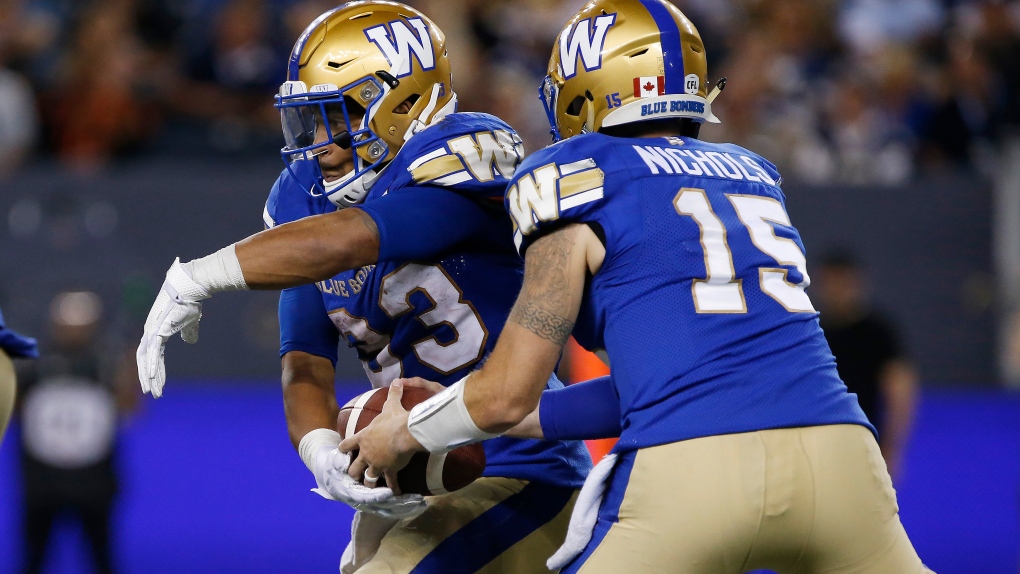 Winnipeg Blue Bombers quarterback Matt Nichols (15) hands off to Andrew Harris (33) against BC Lions during the second half of CFL action in Winnipeg Thursday, August 15, 2019. (The Canadian Press/John Woods)

Matt Nichols was at Blue Bombers practice on Monday, but the starting quarterback was wearing a tank top and only watched his teammates go through their paces.

Head coach Mike O'Shea said after practice that Nichols was going on the six-game injured list with an unspecified upper-body injury that does not require surgery. He'll be re-evaluated in 4-to-6 weeks.

"We'll see where we go from there," O'Shea said.

Nichols was sacked by B.C. Lions defensive lineman Shawn Lemon with nine minutes left in the fourth quarter of Winnipeg's 32-16 victory over the Lions last Thursday. He fumbled the ball and walked to the locker room appearing to favour his right throwing arm.

Chris Streveler replaced Nichols in the game and will start when the CFL West Division-leading Bombers (7-2) travel to play the Edmonton Eskimos (6-3) on Friday.

"I think there's definitely a lot more comfort there," the sophomore pivot said. "Not only just starting some games last year, but I've played in every game since I've been hereΓÇª

"Compared to my first couple games last season, I would think that I've had a lot more experience and feel better about that."

The rookie Streveler took the reins and the Bombers went 1-2. He also started the last regular-season game, which was a loss.

"When I see him go down, I feel for him," Streveler said of Nichols. "I know how hard he works because we're together every single day.

"I know what he puts into this so it's tough to see a guy like that go down, but once again, your job as a backup is to step in and try to move the ball."

Streveler has completed nine of 16 pass attempts this season for 82 yards with one touchdown and three interceptions. He's also run nine times for 39 yards and five TDs.

Rookie Sean McGuire out of Western Illinois, who was signed in May, will be Streveler's backup against the Eskimos.

O'Shea said the team is searching for a third pivot. He confirmed retired veteran quarterback Kevin Glenn was called and so were "a bunch of people." Reports said former Bombers pivot Drew Willy was also approached.

"I don't know about this week," O'Shea said on when another quarterback will be added. "You do need three so we'll be looking at that."

His said his expectation of Streveler is to go out this week and win a football game.

"He's quite capable," O'Shea said. "We give him a lot of snaps in games because he's a good quarterback. He's proven that."

Nichols, who wasn't available to the media, had no sling on at practice. He was bending his arms at the elbows and putting his hands on his hips as he followed the offence and offered input.

Bombers running back Andrew Harris said the offence will be a bit different with Streveler's scrambling abilities and he has "full confidence" in him.

He's been talking to Nichols and said his spirits seemed good despite the situation.

"He's accepting it and he seemed like he was in an OK mood," Harris said.

"You know, sometimes when guys get hurt they sulk and they're pouting. He's out there helping the guys out and being out here and being vocal, so I mean that's big, that's important."

Nichols is the seventh opening-day starting quarterback in the CFL who'll miss at least one game because of injury this year. Only Trevor Harris of the Edmonton Eskimos and Mike Reilly of the B.C. Lions have made every start.

Bombers eight-year linebacker Adam Bighill said he's never seen so many starting quarterbacks be sidelined in a season, especially so early in the year.

"Usually it's going to take two quarterbacks to get it done," Bighill said. "Everybody is going to have to contribute at some point in this season and this is really no different."