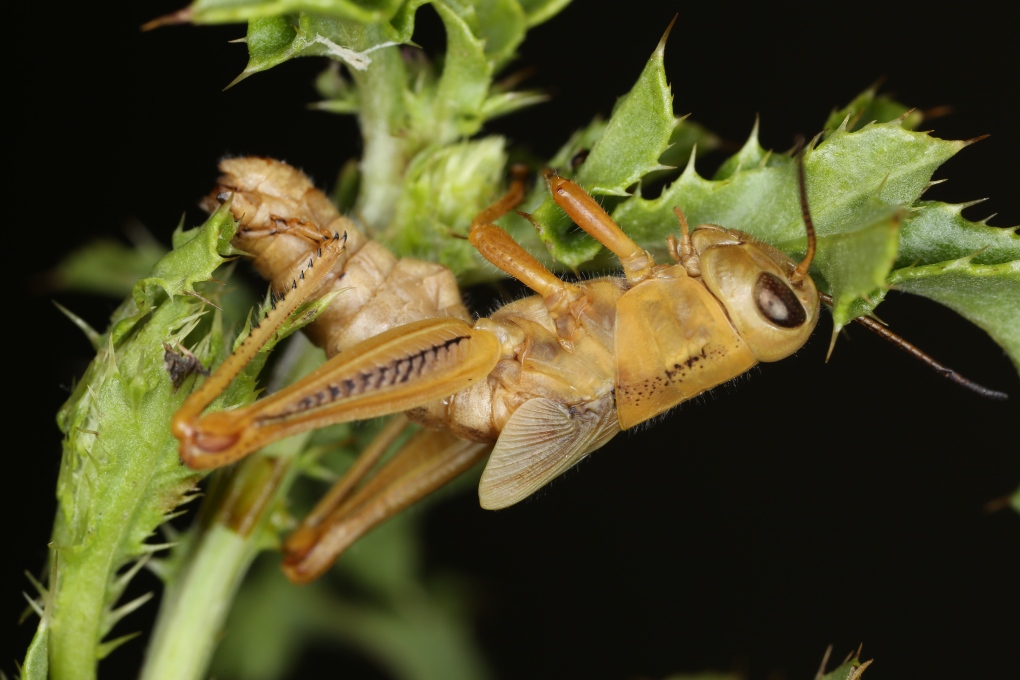 A two striped grasshopper infected with Entomophaga grylli, a fungal pathogen which only kills grasshoppers, is seen on a plant near Lethbridge, Alta., in a July 2021 handout photo. A pattern of dry, hot weather across the Prairies over the past few years has resulted in a grasshopper infestation of epic proportions, with some experts saying the nuisance is negatively affecting every part of the agriculture industry. THE CANADIAN PRESS/HO-Dan Johnson
WINNIPEG -

A pattern of dry, hot weather across the Prairies over the past few years has resulted in a grasshopper infestation of epic proportions, with some experts saying the nuisance is negatively affecting every part of the agriculture industry.

For several weeks, communities and rural areas across southern Alberta, Saskatchewan and Manitoba have been reporting a higher than usual number of grasshoppers inhabiting grassy areas and feasting on crops -- something that hasn't been seen since the early 2000s.

"The grasshoppers seem to be the biggest story this year," said Todd Lewis, president of the Agricultural Producers Association of Saskatchewan.

"It's an issue in timing and unfortunately the timing has been right for grasshoppers this year."

In Manitoba, Brenna Mahoney says she witnessed what she can only describe as a "biblical" number of grasshoppers while visiting a community in the southwestern part of the province late last month.

Mahoney is the general manager of Keystone Agricultural Producers, a farm policy organization in Manitoba.

"It was just the magnitude of how many. Driving around the highway and it was raining grasshoppers," Mahoney said in an interview.

"I had to use my winter scraper to clear off the windshield of my car."

Mahoney is careful not to sound alarmist when recalling her story but she said grasshoppers have become a serious challenge for producers who are already having a tough year.

She said the drought problem has had a dramatic impact on the sector, however, it's actually grasshoppers that make up most of the problems many farmers are facing.

When it's hot, grasshoppers move faster and feed more.

The abnormal heat wave that many parts of Western Canada have experienced created an environment where the insects could blossom, said Dan Johnson, an environmental professor at the University of Lethbridge.

There are about 90 different species of grasshoppers in the Prairies, but only five of them are considered pests that can decimate crops and fields if their population sizes get out of control.

Researchers say one of the problem pests is the two-striped grasshopper, which feeds on cereal and broad-leafed crops such as canola.

In Manitoba, the government has found there has been a large increase in potential pest species in different pockets of the province. As a result, yields and forage production are being affected.

"A lot of the natural vegetation isn't as robust as it should be. People like to cut their ditches and in some cases ... the grasshoppers move into the crops once that happens," said John Gavloski, an entomologist with the province.

Mahoney said farmers need to get in front of the problem by controlling the grasshopper population.

The only way to do this is to use pesticides but there is no technology to target specific species so farmers must be educated on the type of grasshopper they may be dealing with.

Mahoney said the other issue is the financial aspect of using pesticides. It's an expensive burden for many farmers, especially in a growing season already cut short.

In Saskatchewan, many farmers have had to complete harvest early by a month.

"The crop is under stress because of the heat and lack of rain, and then these pests come along and eat what has managed to grow. Farmers just want to get the harvest wrapped up," said Lewis, who farms outside of Regina.

It's not just cereal crops that are bearing the brunt of the insects' appetite. In some areas, they are wreaking havoc on pastures meant for livestock.

Johnson said some farmers have had to resort to buying expensive hay to feed their cattle in British Columbia. Mahoney has also seen this in parts of Manitoba.

While this year has been challenging for producers, experts believe that if the fall brings warm temperatures and the dry, hot weather continues next summer the grasshopper problem will be even more severe.

Johnson said in previous outbreaks cars would slide off the road because of the heavy amount of grasshoppers on roadways.

This report by The Canadian Press was first published Aug. 11, 2021.