Boy, 15, charged after an unprovoked attack at a Winnipeg Liquor Mart

WINNIPEG – A 15-year-old boy is facing a long list of charges including six counts of robbery and three counts of assault, after a late night attack on three Liquor Marts employees late Wednesday evening.

Winnipeg police said on Wednesday at 3:45 p.m. three males armed with knives had entered the Tyndall Park Liquor Mart, and while two suspects allegedly stole a number of liquor products, another suspect became “enraged” at the staff.

Police said the suspect hit one woman in the head – but she was able to retreat to an office.

As the suspect was leaving the store, police said he approached another employee and “without provocation” assaulted her – knocking the woman unconscious. The victim was later taken to hospital in critical condition, but has since been upgraded to stable.

“I can’t imagine the trauma that person is experiencing even now – it’s terrifying,” said Const. Rob Carver, of the Winnipeg Police Service.

A video of the attack shows one woman being punched in the face before falling to the ground. A security guard confronts the attacker, before the suspect leaves the scene.

A witness of the attack told CTV News he was shoved onto a couch and his wife was punched.

Another woman at a different business said she was threatened.

“He robbed the [liquor mart] and came in the mall,” said the woman, who asked not be identified because she fears for her safety. “He threatened to stab me. He told me he was going to stab me.”

Other witnesses of the attack told CTV News there was panic.

Police said the three suspects attacked and assaulted patrons in the store, while the one suspect, who had assaulted staff, pushed his way into another business and allegedly demanded money. Police said another employee was assaulted but did not require hospitalization.

As the suspect was leaving the mall, police said he confronted a woman and her daughter who were hiding in their car. He threatened them and tried to steal the vehicle but was unsuccessful, police said.

Authorities said the rampage continued, as the suspect then attempted to rob two females of their purses, threatening them with a liquor bottle as they lay cowering on the ground.

“This guy has a liquor bottle held up over his head – threatening them as he’s wanting to take their purses,” Carver said.

At this point, several people intervened and were able to hold the suspect until police arrived. Carver said he is not sure at this point how many people jumped in, but he said their actions may have stopped further more serious assaults.

“What those people did was very brave.”

Carver said eight people are considered of victims in the assault.

A 15-year-old boy is facing the following charges:

Police said they do not believe meth was a factor in this assault. Carver said the 15-year-old was not really known to police prior to this incident. He was detained in custody, where he remains.

Police said two other suspects remain outstanding, but they expect arrests to be made within 24 hours.

VIGILANTE JUSTICE ILLEGAL, BUT PROTECTING THOSE AT RISK IS NOT

So when can people intervene? Carver said he gets that question a lot.

“Vigilante justice is something that is illegal, it’s dangerous, and I’m going to stand up here and tell you no one should consider it,” He said, adding the situation changes when other people are put in harm’s way.

“If somebody were to intervene in a situation where an individual is being severely assaulted, potentially live threating and they intervene – all I can say is good on them as long as they didn’t get hurt in it – it’s a tough call.”

But if there is no assault or no risk of assault, Carver said there is no reason for the public to step in. He said it puts everyone at risk, and can escalate the situation.

In the case of what security guards can and cannot do when confronted with a robbery, Manitoba Justice said security guards have no extra or special powers. However the criminal code does allow people employed to protect property to arrest people found committing property crime.

A spokesperson for Manitoba Justice told CTV News, all security guards must complete mandatory provincial training, and are governed by the same reasonable use of force as any private citizen.

The spokesperson said a security guard’s main function is to observe, deter and report.

Just hours after the assault, Manitoba Liquor & Lotteries made a late night announcement – launching the new secure entrance initiative.The Crown corporation said it was already planning to launch the initiative, prior to the attack. MBLL said the initiative was moved up because the seriousness of the incident demanded an immediate response.

Starting with the Tyndall Park Liquor Mart – the doors will be locked and customers must show valid photo ID before entering. MBLL said these include a Manitoba ID card, a passport, and certificate of Indian Status. Two forms of government-issued ID can also be used instead, though one must be photo ID.

MBLL said minors will also no longer be allowed in Liquor Marts, even when accompanied by an adult.

All Liquor Marts in Winnipeg will eventually be retrofitted to include the increased security measure.

“We have tried numerous tactics to try and address this issue, but it is clear to us that more drastic measures must be taken,” said MBLL President and CEO Manny Atwal, last night. “While we absolutely regret having to impose these measures – we have been left with no choice in order to protect our employees and our customers.”

These kinds of violent thefts have become common in Winnipeg, Carver said. Estimating police are called to up to 30 liquor stores for reports of theft each day. And he said it's not just Liquor Marts.

“It’s retail landscape – all sorts of stores are seeing very aggressive people coming in and what used to be a shoplifting incident has turned into an armed robbery,” Carver said.

But with the thefts, police are making arrests every single day. In just the past couple months, Carver said hundreds have been arrested.

There is a team of officers dedicated to sifting through liquor store video in order to make arrests.

“We are making arrests every single day, not only actively at liquor stores and other locations as well, but after the fact as we assign officers to track these individuals down based on video surveillance.”

OUTPOURING OF SUPPORT AFTER ATTACK

On the day following the attack on the Liquor Mart employees and Tyndall Market Mall patrons, the Tyndall Park community began posting letters of support.

One sign said, “Tyndall Park values our people and mall!” while others had messages for the employees.

“Get well soon,” another note read. “Your community cares about you.”

You can see all the letters of encouragement here: Outpouring of support after Liquor Mart attack

Manitoba Premiere Brian Pallister had a message for the attackers.

-With files from CTV's Josh Crabb 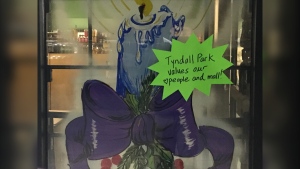