Police said they searched the park with the emergency response team, a K9 unit and the Kenora Marine and Trails unit.

"It's very tragic," said Duggan. "The family is not local. We are not releasing the name. They do have to travel home," he said.

Many campsites at the park are situated along high ridges and near water.

Andy Willerton, a dad of three, has been coming to Rushing River since he was little and can't recall anything like this death ever happening.

"This is just sickening. It's just awful. I can't imagine that happening to my kids. Awful. I feel terrible for the family," he said. 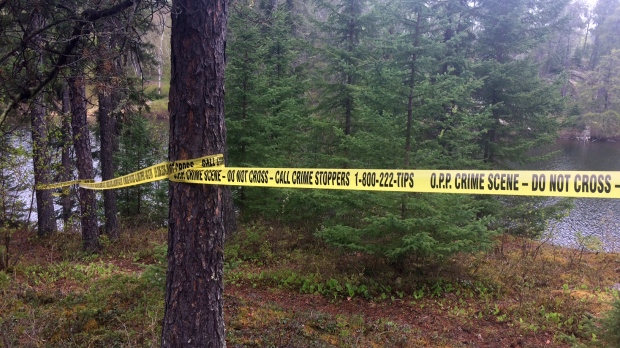 OPP blocked off an area in the Southeast Campground of the park with police tape. The area is next to a footpath along high ridge and overlooks Dogtooth Lake. (Photo: Beth Macdonell/CTV Winnipeg)

Police said they are still notifying family about the boy's death. Autopsy results are expected to be released Tuesday.

Duggan said foul play is not suspected at this time, pending the autopsy.

With files from Beth Macdonell and The Canadian Press