Broadway tree canopy could be revitalized with new technology 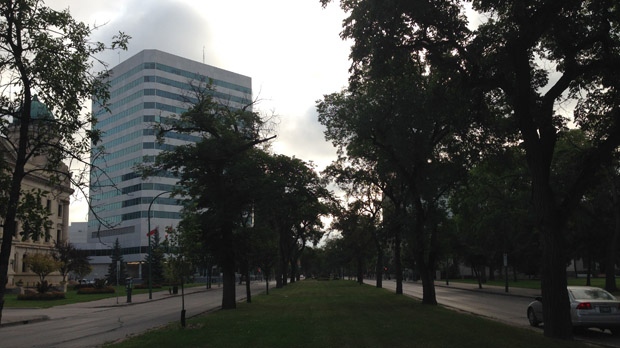 An infrastructure funding initiative could bring technology to Broadway that would allow trees to grow in the pavement to help the historic roadway’s struggling canopy.

City of Winnipeg Forester Martha Barwinksy said the city has the opportunity to revitalize the iconic avenue's aging tree population through the federal Natural Infrastructure Fund.

Barwinsky said the trees, planted in the late 1800s and early 1900s, have been declining in recent years. In addition to their advanced age, urban stresses like traffic, winter road management, pollution, and construction have impacted the canopy’s health.

“With this project, Broadway itself is actually due for renewal or reconstruction over the next couple of years, so this is an opportunity for us to actually install appropriate infrastructure, this new technology in order to grow trees on the side boulevards in the pavement,” Barwinsky told CTV News Winnipeg.

One of the biggest limiting factors with growing trees in downtown Winnipeg, Barwinsky said, is soil quality and volume, along with space for trees to mature and develop fully. The forester said the modular, suspended pavement system technology would be installed underground, allowing large amounts of good quality soil. Other underground infrastructure could also coexist in those systems that could help with stormwater management.

“They are more costly, of course, so the cost per tree can be anywhere from $15,000 to $20,000 on average. However, the benefits outweigh the costs of installation,” she explained, noting the canopy's importance in mitigating the impacts of climate change, like the urban island effect.

A report before the city’s executive policy committee by the public service recommends applying for funding for the technology, dubbed the Trees on Broadway Project, through the federal fund.

The committee is set to vote this week on whether to apply for the funding that could cover up to 60 per cent of the project.

The project comes with an estimated price tag of between $3 and $6-million.

“Particularly Broadway is an iconic corridor for Winnipeg,” the forester said.

“We’ve called it often our Broadway Avenue of elms. We still expect to plant elms along Broadway to retain that historical significance and that iconic setting. However, we do want to increase diversity as a whole, particularly in the downtown.”