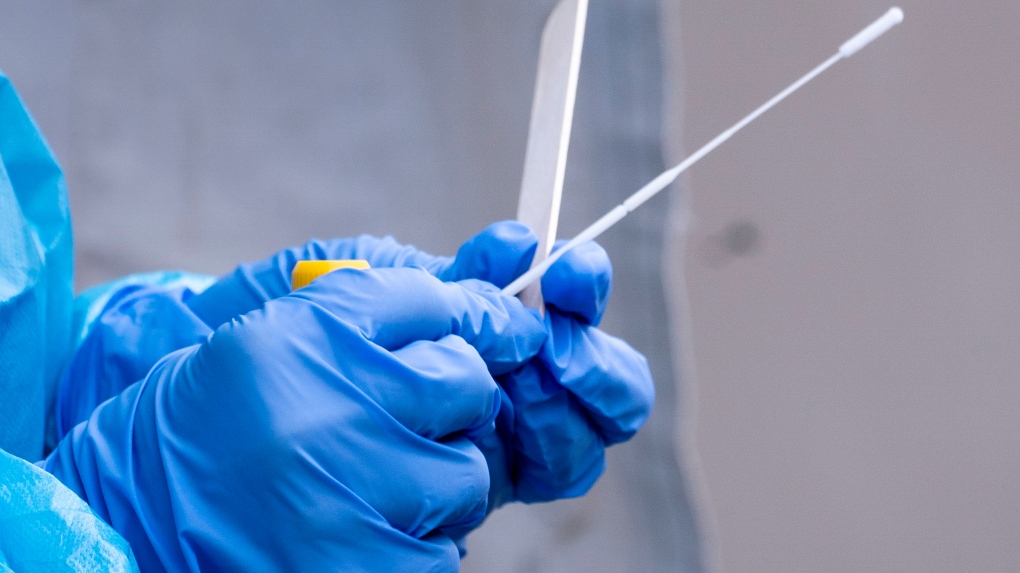 A nurse gets a swab ready at a temporary COVID-19 test clinic in Montreal, on Friday, May 15, 2020. With students and teachers preparing to return to classrooms across the country this month, experts say ramping up testing protocols is one way to help provide a safe transition back to school. THE CANADIAN PRESS/Paul Chiasson

Dr. Jared Bullard was cross-examined by lawyer Jared Brown - a lawyer representing a group of seven Manitoba churches and three individuals fighting the restrictions on the grounds they infringe on Charter rights to hold religious and public gatherings.

Court heard Cadham is one of the labs that performs tests for the province on samples collected from individuals at COVID-19 swab sites to determine whether those samples are positive or negative.

Brown spent time questioning Bullard about the PCR (polymerase chain reaction) tests used by the lab and many other jurisdictions to detect for the presence of SARS-CoV-2 in a person’s respiratory system.

Bullard testified PCR tests are the most dependable tests they have and added they are performing quite well in identifying the virus.

Brown asked Bullard about Ct (cycle threshold) values which represent the number of cycles it takes for a PCR test identify the virus.

It’s an area Brown has previously explored during the court case with officials from Manitoba Health including Dr. Brent Roussin, suggesting those values could give the public more context about the infectiousness of individual cases.

“We’re not doing that systematically,” Bullard told the court. He testified he and a co-worker do spend time fielding calls from their colleagues in clinical care asking about Ct values which Bullard told court is mainly to help guide infection control practices.

In Manitoba, PCR tests are performed on samples given by individuals who are symptomatic or who have been directed to be tested due to potential exposure to the virus.

Bullard testified a positive sample with a Ct value over 25 means there is a higher probability the person is not infectious but they can’t say for certain — Bullard told court it’s important to look at the full clinical and epidemiological context of each positive sample because a high Ct value could also represent the beginning stage of an infection.

He testified a PCR test on its own should not be used to determine infectiousness. It is important to know if someone had symptoms prior to the test, Bullard told the court.

He told the court someone who tests positive for SARS-CoV-2 “will have been infectious at one point.”

Brown asked Bullard if it’s possible someone who tests positive could have been exposed to the virus but not infected.

“That would be exceptionally rare,” Bullard testified. “The majority of people who test positive have been infected.”

Court heard the applicants in the case requested information from the province and received Ct values for 15,464 positive PCR tests specifically performed by Cadham Lab during the pandemic.

Bullard told the court he agreed with Brown’s analysis that roughly 45 per cent of the cases had Ct values greater than 25.

Bullard testified a person with a positive PCR test is a true positive case approximately 99.9 per cent of the time.

“That doesn’t mean that they’re infectious 99.9 per cent of the time,” Brown suggested.

“They are going to be infectious at some point,” Bullard told the court.

He told the court he agreed with Brown that people who test positive for SARS-CoV-2 are generally no longer infectious within one to two weeks of symptom onset.

“The average duration is somewhere around the two-and-a-half to three-week mark,” Bullard told the court. “But we’ve seen people who’ve tested positive up to about three months and that’s not based on reinfection that’s just shedding of old dead material.”