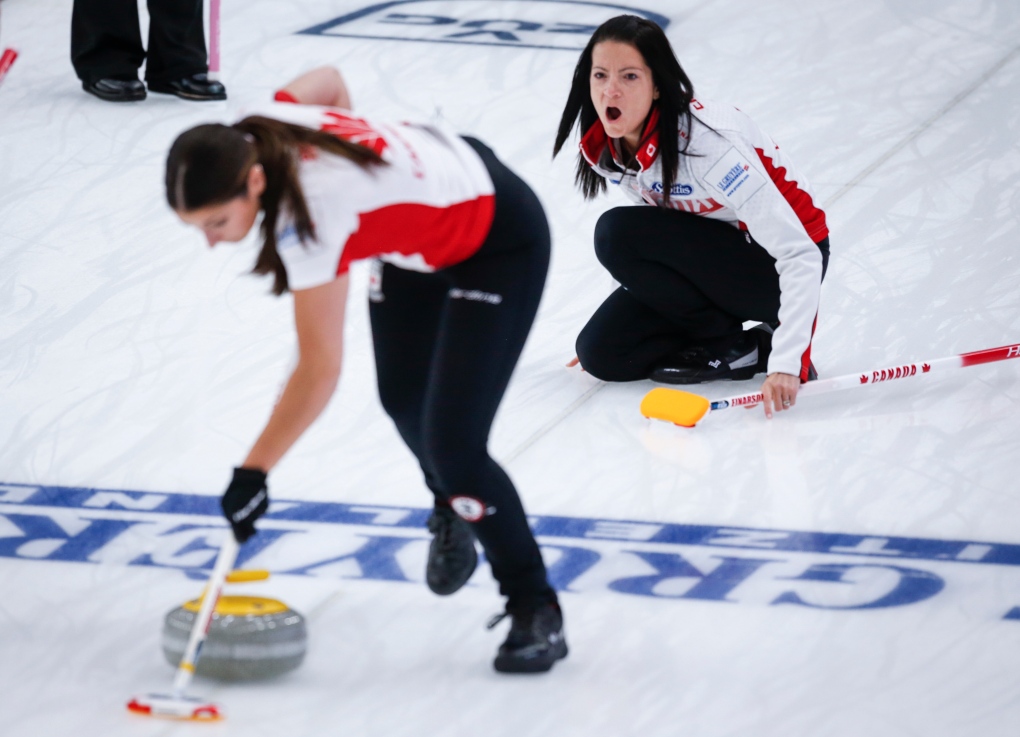 CALGARY -- The path to the playoffs was a bumpy one for Canada's Kerri Einarson at the world women's curling championship.

Now that she's cleared the hurdle of making the six-team cut, she can leave her uneven 7-6 round-robin record behind and concentrate on getting to the podium.

Einarson beat China's Yu Han 6-4 on Friday morning and secured a playoff spot later in the day when Germany lost to Switzerland. Einarson also secured a berth for Canada at the 2022 Olympics.

"It's such a relief," Einarson said. "I'm not going to lie. I didn't think it was going to be that stressful, but it was."

Canada will play in a qualification game Saturday morning against Sweden. The semifinals are scheduled for later in the day with the medal games set for Sunday at WinSport's Markin MacPhail Centre.

Einarson and her Manitoba-based team of Val Sweeting, Shannon Birchard and Briane Meilleur struggled mightily at the start with just one victory in their first six games. They rebounded to get back to the .500 mark and then delivered in their round-robin finale.

"We never gave up and we just kept battling out there," Einarson said. "I'm so proud of us and where we have put ourselves -- into the playoffs."

Silvana Tirinzoni, the defending champ, needed only eight ends to complete an 8-3 win over the three-player German side skipped by Daniela Jentsch in the afternoon.

Denmark (8-5) moved into fourth place and American Tabitha Peterson (7-6) locked up the other playoff spot later in the day.

The No. 3 seed Swedes will meet No. 6 Canada in one qualification game and No. 4 Denmark will play No. 5 U.S. in the other. Switzerland and Russia earned byes to the semifinals.

The Canadian team put some early pressure on China and it paid off with steals. Yu rubbed a guard in the first end to give Canada a deuce and Einarson stole a single in the fourth.

Canada stole another point in the eighth end and ran China out of stones in the 10th to win it.

"It's been an absolute roller-coaster," Einarson said of her week. "Sometimes we'd just dig ourselves in a hole and we'd just battle back."

At the start of the morning session, Canada was one of seven teams with a chance of earning one of three remaining playoff berths. South Korea's EunJung Kim (7-6), Scotland (6-7) and Germany (6-7) just missed the cut.

After repeated negative tests from other broadcast crew members, Alberta Health approved a World Curling Federation proposal to resume coverage with minimal staff for the final three days of competition.

Staffers who tested positive remain in isolation and are being monitored by medical officials. Athletes and team officials are staying at a different hotel than broadcast staff.

Canada is looking to return to the podium for the first time since Jennifer Jones won gold in 2018 at North Bay, Ont.

Chelsea Carey represented Canada in 2019 at Silkeborg, Denmark but didn't make the playoffs. Last year's championship was cancelled due to the pandemic.

Brendan Bottcher represented Canada at the world men's curling championship last month in the curling bubble. He reached the six-team playoffs but lost the qualification game.

The women's world championship is the last of seven competitions to be played in the bubble at the Canada Olympic Park venue.

This report by The Canadian Press was first published May 7, 2021.