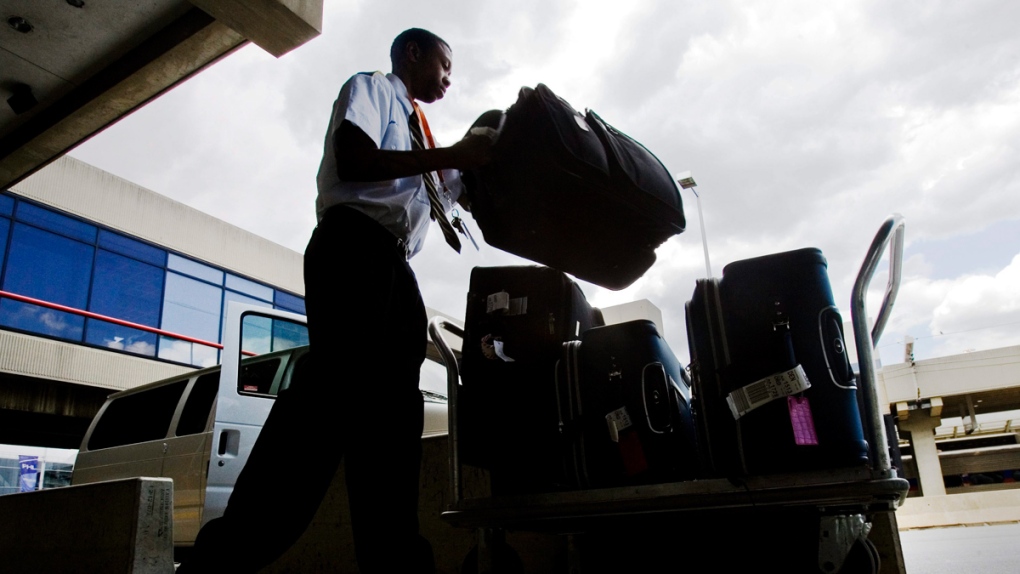 MONTREAL -- Air Canada, as expected, is joining rival WestJet Airlines in charging passengers a fee to check their first bag on domestic flights as the two airlines also finalize plans to introduce other ancillary fees in a move to boost revenue.

The new fee being charged by Air Canada (TSX:AC.B) applies to passengers booking the airline's lowest economy class Tango fares as of Thursday for flights beginning Nov. 2. It applies to flights within Canada and to the Caribbean and Mexico.

The Montreal-based airline has charged for a traveller's first checked bag on U.S. routes since 2011.

The country's largest airline said the fee was being introduced domestically to align it "with prevailing North American industry practices."

Earlier this week, Calgary-based WestJet (TSX:WJA) announced a fee, ranging between $25 and $29.50 depending on provincial taxes, for a first checked bag for some economy class customers on flights within Canada and to the United States, but not to Mexico, the Caribbean, Central America and Europe.

Industry observers had expected Air Canada to add the fee which, the airline says, will affect about 20 per cent of passengers on domestic flights.

"I think it was guaranteed that they were going to make this announcement before this week was out," Robert Kokonis, president of airline consulting firm AirTrav, said from Geneva.

He anticipates more fees to come unless there is a substantive consumer push back, which is unlikely because of the strong domestic duopoly in Canada.

"Investors we love it of course...and for passengers it's a tough pill to swallow," he said. "(But) a couple of months from now, the online chat boards will quiet down and people will grudgingly accept that this is the new reality."

Canadian airlines are playing catch-up with the global airline industry, which last year collected more than US$31 billion in non-airfare fees, up from US$2.45 billion in 2007. WestJet's new bag fee will help the carrier to increase its ancillary revenues from $10 per passenger towards the $16 average of global carriers.

Low-cost carrier Spirit Airlines led the industry, earning 38.4 per cent of its annual revenues from such fees last year, according to airline consultant IdeaWorks. United Airlines led among large U.S. carriers at nearly 15 per cent. WestJet and Air Canada were well down the list, earning 4.5 per cent and 3.9 per cent of revenues respectively from ancillary fees.

Analyst Chris Murray of AltaCorp Capital estimates the fee will affect 40.7 million passengers in 2015 and add about $50 million in pre-tax operating earnings (EBITDAR) for Air Canada.

Rousseau said the charges represent what the market will bear. Kokonis said they could also encourage passengers to "buy up" to higher fare classes or use other ways to avoid a growing number of extra charges.

Meanwhile, the country's two largest airlines, which account for the lion's share of the domestic market, are preparing to introduce additional charges including onboard Wi-Fi.

"There are many different programs in place or about to be executed that will continue to enhance ancillary revenues," he said.

WestJet chief financial officer Vito Culmone told the investor conference that the increase in ancillary fees is "a natural evolution" in its strategy to keep airfares low and allow passengers to buy the services they want.

About 75 per cent of its passengers check bags, but the airline expects the new fee could reduce checked bags by 20 to 30 per cent, based on experience of other airlines.

WestJet expects little downside from adding the checked bag fee, since it didn't see any competitive advantage when it didn't have a fee for flights to the U.S.

Tour operator Transat A.T. (TSX:TRZ.B) said it too is implementing new fees to raise ancillary revenue as it seeks ways to improve profitability. It expects to generate about $48 million in ancillary revenues this year and a lot more in years to come.

Transat charges passengers to select seats and has introduced new fare classes that provide more flexibility. It has also begun to charge for food on flights operated by Air Transat to the Caribbean and Mexico, and has a kiloflex fee for passengers who travel with a lot of luggage.

"We will look everywhere we can to make more profit," CEO Jean-Marc Eustache told the conference.