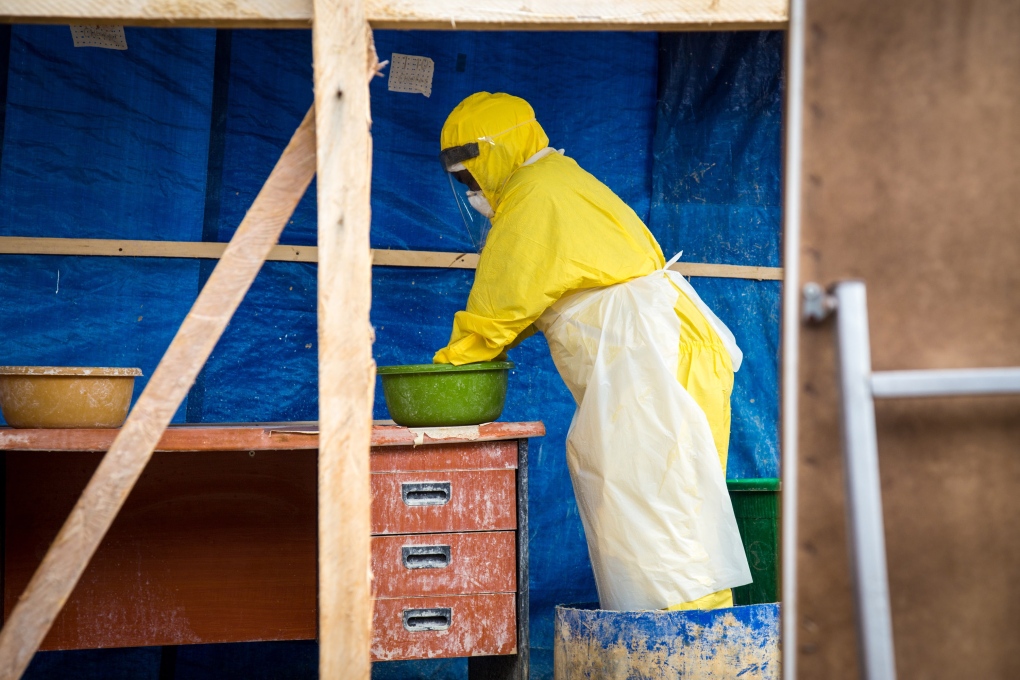 A healthcare worker washes his hands and boots at an Ebola treatment centre in the Hastings area of Freetown, Sierra Leone, Wednesday, Oct. 15, 2014. (AP / Michael Duff)

TORONTO -- Canada is following in Australia's footsteps and has closed its doors, effectively immediately, to people from the West African countries battling Ebola.

In a move that puts Canada at odds with the World Health Organization, the federal government said Friday it is suspending the issuance of visas for residents and nationals of countries with "widespread and persistent-intense transmission" of Ebola virus disease. As well, work on permanent residence applications for people from the affected countries is also being suspended.

The stress on countries with widespread transmission provides an out for the United States, which currently still has at least one active Ebola case within its borders. At present only three countries meet the definition of widespread and persistent Ebola transmission: Guinea, Sierra Leone and Liberia.

An international law expert denounced the move, saying it was a violation of the International Health Regulations, which Canada helped to draft in the aftermath of the 2003 SARS outbreak. And David Fidler, of Indiana University, said the decisions of Canada and Australia to close their doors to the citizens of the affected countries runs the risk of destroying the IHR, as the treaty is called.

"The whole thing that so many years and so many efforts and so much money was spent on just seems to be disintegrating in this Ebola panic," Fidler said of the treaty.

"And to have countries like Australia and Canada be in the forefront of this is even more disheartening, because they had been shoulder to shoulder with us trying to build these regimes, these approaches and to keep us focused on having a disciplined approach in a (disease) crisis."

"Now they are back to allowing fear and politics drive responses to a disease threat. And we know that only ends up in a bad place."

The change was announced Friday in the Canada Gazette. In a news release issued some hours later, the government said it was taking "new precautionary measures to protect the health and safety of Canadians."

The government said the move does not affect Canadians in West Africa; Canadian health-care workers helping in the effort to contain Ebola will be permitted back into Canada, the release said. As well, Citizenship and Immigration Minister Chris Alexander retains the discretion to grant entry on a case-by-case basis in exceptional circumstances "where travel is essential and in Canada's interest."

"The precautionary measures announced today build on actions we have taken to protect the health and safety of Canadians here at home," the news release quoted Alexander as saying.

"A visa ban isn't a solution. The World Health Organization and the World Bank have both spoken out sharply against international travel bans, so the experts we're relying on to fight Ebola are saying this is not the right approach," Davies said in an email.

"The Conservative government seems more interested in public relations than in acting on recommendations from public health experts."

Earlier this week Australia issued a blanket ban on visas for resident and citizens of the West African countries struggling to cope with the most devastating Ebola outbreak the world has ever witnessed.

That move was slammed Wednesday by Dr. Margaret Chan, the director general of the World Health Organization, who said closing borders will not stop spread of the Ebola virus.

"I understand the fear in the community, but the fear factor is way too high and out of proportion to the risk," Chan told Bloomberg News in an interview. "No evidence exists to support the effectiveness of travel bans as a protective measure."

Both countries may soon have to try to produce some evidence to support their actions. Under the International Health Regulations, they will have to explain these decisions to the WHO.

The IHR are designed to help the world fight infectious disease outbreaks that have the potential for international spread. When they were revised and strengthened in 2005 after the SARS outbreak, an emphasis was put on not penalizing countries that are experiencing outbreaks because doing so may incite countries to cover up epidemics rather than disclose them.

During SARS, the World Health Organization issued travel advisories directing people around the world to avoid places battling outbreaks. It is a tool the organization has never used again.

One of the places hit with a travel advisory was Toronto.

Ontario's then health minister, Tony Clement -- now president of the federal treasury board -- was incensed by the WHO's move. Another prominent member of Prime Minister Stephen Harper's cabinet, Foreign Affairs Minister John Baird was also part of the Ontario government that roundly denounced the WHO for the travel advisory, which emptied hotels and conference centres in Canada's largest city.

Under the IHR, countries agree not to restrict trade or travel over and above what is recommended by the WHO during Public Health Emergencies of International Concern. The WHO declared Ebola an international public health emergency on Aug. 8 and in doing so said countries should not close their borders to the West African countries struggling with Ebola. It has repeated that advice several times since.

The IHR stipulate that countries that go beyond the WHO's recommendations have to back up their decisions with solid rationale.

"You have to explain yourself. And you have to show that your measure, which is more restrictive than what WHO is recommending, is based in science and public health principles," Fidler said in an interview.

"There isn't a public health or scientific justification for what Australia and Canada are doing. Therefore they are in violation of their obligations under the international health regulations."

Fidler said that Canada and Australia -- both major contributors to international public health efforts and supporters of the WHO -- are taking these actions is particularly disheartening.

"Canada is known as being a champion of well-informed, scientifically based, evidence-solid policies. Then something like this happens and it's not only disappointing, it's also a violation of international law. And both Australia and Canada have the capacity to deal with this issue in a way which doesn't have such adverse effects on these West African countries which are suffering from this unprecedented epidemic."

In fact Canada actually receives very few travellers from the affected countries. Research done by University of Toronto expert Dr. Kamran Khan showed that only about 1.5 per cent of people travelling from those countries in any given year come to Canada.

A recent study Khan and colleagues published in the journal The Lancet showed the three countries -- among the world's poorest -- are not major contributors to international travel. Their combined travel made up half of one per cent of all international air travel in 2013. The figure would be expected to be substantially lower this year, as many air carriers have cancelled flights to the countries. Flights from Liberia are down 51 per cent, from Guinea 66 per cent and Sierra Leone 85 per cent.

The latest figures from the WHO suggest at least 13,567 people have been infected since this Ebola outbreak began, and 4,951 have died.