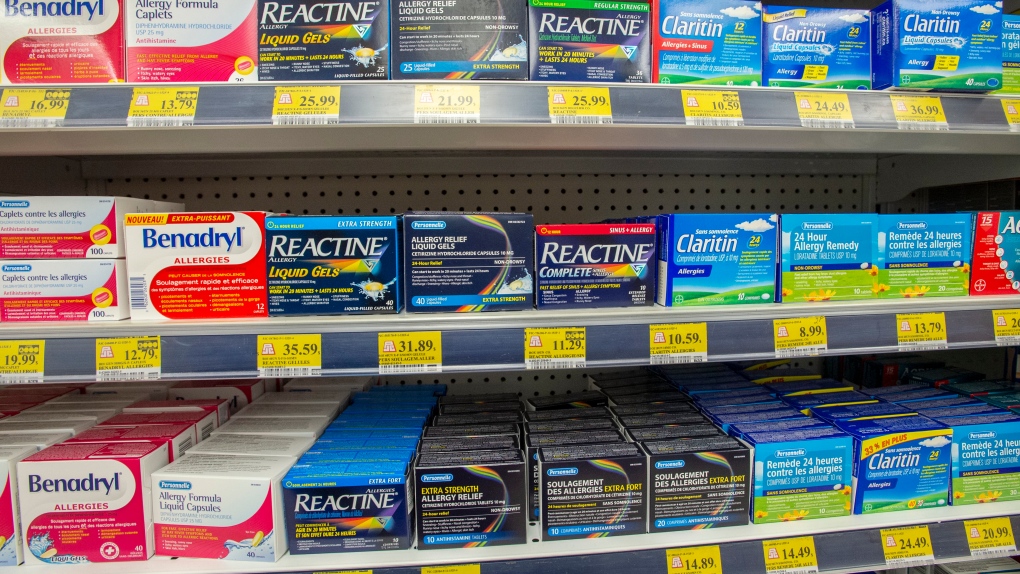 Antihistamines are seen at a pharmacy in Montreal, Monday, Nov. 11, 2019. THE CANADIAN PRESS/Ryan Remiorz

Benadryl has for decades been used as a go-to drug to treat everything from bee stings to mysterious toddler hives, but a growing number of doctors now say the antihistamine is less effective and less safe than newer alternatives and call into question its ubiquitous over-the-counter status.

A position statement from the Canadian Society of Allergy and Clinical Immunology (CSACI) published in early October warns against Benadryl and other first-generation H1 antihistamines as first-line treatments for hay fever and hives in adults and children.

Health Canada is reviewing the statement, in which the group of doctors say the medication is over-used because of its easy availability and that it should be restricted to behind-the-counter access in pharmacies.

"It dumbfounds us that people still want to use it," Dr. David Fischer a clinical allergist in Barrie, Ont., and an author of the CSACI position statement says of the group of antihistamines that include Benadryl. "There are many other safer options that work as well or better."

Fischer says the medicinal ingredient in Benadryl, diphenhydramine hydrochloride, "makes you drowsy and irritable and if you take too high a dose or an overdose, you will end up in hospital."

Other reported side effects from an overdose of first-generation H1 antihistamines include breathing problems, coma, and seizures,according to the CSACI statement. There is also the potential for fatal heart rhythm disturbances when combined with other medications.

In comparison, Fischer says newer generation H1 antihistamines -- such as Reactine, Claritin and Aerius, which make liquids or tablets for children as well as adult products -- are safer, more effective and work more quickly. One of the biggest differences is that the newer medications cause much less, or no sedation.

Even at prescribed doses, medications like Benadryl are associated with sedation, cognitive impairment, and memory problems, says Dr. Anne Ellis, an allergist and professor at Queen's University. Children can have paradoxical reactions that make them hyper, while elderly people can get delirious, she adds.

Diphenhydramine hydrochloride is a first-generation H1 antihistamine and has been used since the 1940s. H1 refers to the type of cell receptors it works on in the brain, while first-generation means it's an older classification of drugs that can cross into other parts of the body, leading to many other reactions apart from its intended antihistamine effects. Diphenhydramine is found in several brand-name and generic medicines for allergies or cold symptoms in North America, of which Benadryl is the best-known.

Benadryl and Children's Benadryl are available in pharmacies and stores without a prescription and marketed in Canada for many different symptoms including sneezing, runny nose, itchy eyes, insect bites, hives and other rashes.

Benadryl's maker, Johnson & Johnson said in a statement that "Benadryl products have been trusted by doctors and moms for more than 60 years to provide effective symptom relief from allergies and allergic reactions." The company said the products are approved by Health Canada and "when used as directed, are safe and effective."

The federal regulator said it is aware of safety concerns regarding the use of diphenhydramine-containing products in children. Since 1965, the agency has received more than 1,700 reports of "serious adverse reactions suspected to be linked to products containing diphenhydramine," which include fatigue, fevers, headaches and drowsiness.

It adds those reports were not assessed by the agency, and that it's "not possible to determine whether an adverse reaction reported to Health Canada is a result of using a specific health product."

While both adults and children can experience side effects from diphenhydramine, children are particularly at risk for serious complications. This is because a small measuring error in dosing for a child can lead to an overdose and children can easily ingest the amount of medication that can be toxic.

Health Canada pointed to a 2016 guidance document advising sleep aid products that contain diphenhydramine hydrochloride should carry a label warning against use in children under 12 years of age. However, the agency did not clarify why the same guidance document does not require this warning for diphenhydramine hydrochloride in allergy or cough medications.

For adults, the 2016 Health Canada guidance document advises against driving or engaging in "activities requiring alertness" when diphenhydramine is taken for allergies or cough.

World Health Organization data, published in 2017, reveal almost 9,000 reports of adverse drug reactions to H1 antihistamines in children, including 400 deaths. Benadryl-type medications were involved in 42 per cent of these deaths -- more than four times as many than with any other antihistamine studied. Many of the deaths occurred in the United States and were due to accidental or non-accidental overdoses.

Since 2013, the World Allergy Organization has recommended newer antihistamines over first generation antihistamines for the general treatment of allergies in their White Book.

Second- and third-generation H1 antihistamines were developed to have good antihistamine effects without the other side effects, and these became available in Canada in the 1980s. These medications contain antihistamine agents such as loratadine, desloratadine, or cetirizine instead of diphenhydramine.

But, he adds, "I do not think this information has gotten out to the community hospitals at all and a lot of emergency physicians are still using first-generation antihistamines."

Even as calls for a re-consideration of first-generation H1 antihistamines like Benadryl grow among experts in professional organizations, the medical advice has been slow to trickle down to doctors and parents who continue to give the older medications to children, and to take it themselves.

"The side effects and the problems with first-generation antihistamines have been well recognized for a very long time," says Dr. Ellis.

"It's very challenging to convince somebody what (they) have been doing for the past 20 years is wrong."

This report by The Canadian Press was first published Nov. 13, 2019.