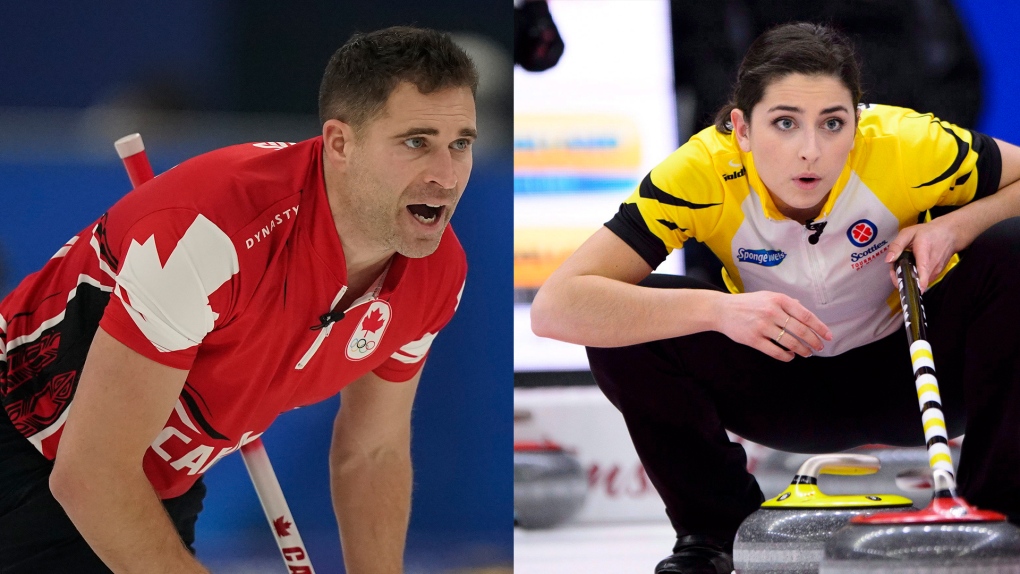 (Left image: John Morris, of Canada, yells to his teammate after he throws a rock during the mixed doubles curling match against the Czech Republic at the Beijing Winter Olympics Monday, Feb. 7, 2022, in Beijing. AP Photo/Brynn Anderson) (Right image: Manitoba third Shannon Birchard calls the sweep while taking on B.C. at the Scotties Tournament of Hearts in Penticton, B.C., on Thursday, Feb. 1, 2018. THE CANADIAN PRESS/Sean Kilpatrick)

Morris, who won Olympic mixed doubles gold with Kaitlyn Lawes in 2018 and also competed with Rachel Homan in Beijing in February, and Birchard announced their partnership Wednesday on social media.

"I'm very excited to partner with Shannon," Morris said in a post. "She's one of the top female curlers in the game and one of the best all-around players I've ever seen."

Morris, of Canmore, Alta., was Kevin Koe's second for the past two seasons and won Olympic men's team gold in 2010 as Kevin Martin's third.

He and Homan were ousted in an extra end loss in the Olympic quarterfinals in Beijing.

"He is such a talented and smart player," Birchard said.

"He has so much experience in this discipline and I can't wait to learn from him and compete with him."

This report by The Canadian Press was first published July 7, 2022.

Anne Heche has remained in critical condition since crashing her vehicle into a Los Angeles residence on Friday, according to a new representative for the actress.

After Russia invaded Ukraine last February, the European Union moved to block RT and Sputnik, two of the Kremlin's top channels for spreading propaganda and misinformation about the war. Nearly six months later, the number of sites pushing that same content has exploded, according to a report by NewsGuard.

The FBI searched Donald Trump's Mar-a-Lago estate as part of an investigation into whether he took classified records from the White House to his Florida residence, people familiar with the matter said Monday, a move that represents a dramatic and unprecedented escalation of law enforcement scrutiny of the U.S. former president.

Nagasaki paid tribute to the victims of the U.S. atomic bombing 77 years ago on Aug. 9, with the mayor saying Russia's war on Ukraine showed the world that another nuclear attack is not just a worry but 'a tangible and present crisis.'

Federal prosecutors in the United States have accused a Saskatoon woman of faking her own death and that of her son in what they describe as an elaborate scheme to illegally enter the country.