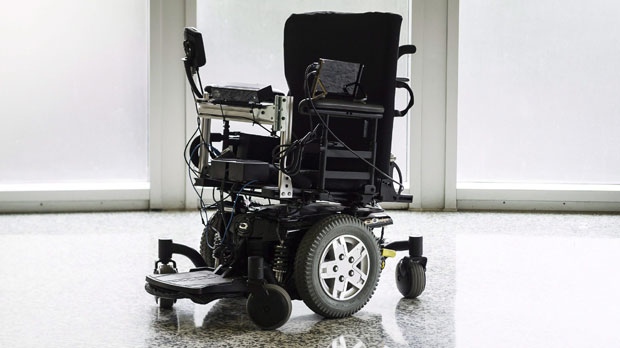 A self-driving wheelchair is photographed at the University of Toronto on Thursday, July 20, 2017. A team of Canadian researchers and robotics experts say they've developed cost-effective technology that would allow power wheelchairs to drive themselves. THE CANADIAN PRESS/Christopher Katsarov.

TORONTO -- A team of Canadian researchers and robotics experts say they've developed cost-effective technology that would allow power wheelchairs to drive themselves.

Toronto-based Cyberworks Robotics and the University of Toronto have applied the same principles at work in self-driving cars, saying using similar types of sensors on motorized wheelchairs can allow the mobility aids to dodge obstacles and travel routes without assistance from the user.

They say previous autonomous wheelchair designs could cost the user upwards of $30,000, but say the product they've developed will have a total cost of between $300 and $700.

The technology is still a work in progress, as it still struggles to operate in full sunlight and is currently intended for indoor use, but developers say they hope to make it commercially available in the near future.

Wheelchair users say they're cautiously optimistic about the development of such technology.

They say it has the potential to reduce user fatigue and even address secondary disabilities, but should not be viewed as a solution to the broader social issue of ensuring spaces are accessible for all.

While the concept of self-driving wheelchairs has been active for quite some time, the current project truly got off the ground about two years ago, according to University of Toronto professor and principal investigator Jonathan Kelly.

The concept was originally intended to help wheelchair users with upper-body disabilities that limited their movements, such as hand tremors, ALS or spinal cord injuries.

Kelly said people with such conditions cannot manipulate the joystick found on most power chairs and must currently resort to eye-tracking technology or "sip and puff" devices, which he likened to large straws, to control their mobility aids.

The new and as yet unnamed technology, he said, might be seen as a welcome alternative.

"All of these technologies are extremely difficult to use and very tedious to use. They're basically exhausting," Kelly said of the currently available options. "For users with these types of mobility impairments, if we can enable autonomous navigation, it could really dramatically enhance their quality of life."

Kelly said the project has not focused on developing new wheelchairs, but rather a sensory system that could be retrofitted to existing power wheelchairs or incorporated in ones to be built in the future.

One key piece, he said, is a relatively low-cost, three-dimensional sensor affixed to a bar on the front of the wheelchair.

The sensor can pick up on objects about 5 metres away and, much like self-driving cars, chart a course that will avoid objects in its path, travel smoothly through open doors and perform other typical functions that usually require input from the user, he said.

The sensor works in tandem with devices that track the speed at which the chair is travelling and uploads information to a small on-board computer.

"Mapped mode" will allow users to program familiar spaces and frequently travelled routes, such as the route from a person's office to a conference room, while "unmapped mode" can be used in unfamiliar environments.

Vivek Burhanpurkar, Chief Executive of Cyberworks Robotics, said the technology has benefits for wheelchair users of all stripes, not just those with upper-body mobility challenges.

He said users can concentrate on other activities while the chair accomplishes typically difficult tasks like easing through doors or docking to desks or tables.

"Having self-driving technology just makes the quality of life a lot more convenient," he said. "They can do other things rather than having to control a joystick. They can be checking your email, browsing the internet or whatever you like."

At least one wheelchair user agreed, saying it's easy to envision ways in which self-driving wheelchairs could simplify life in some respects.

Alexandra Haagaard, 29, said it would be beneficial to be able to teach wheelchairs to navigate accessible routes, reducing fatigue on wheelchair operators. People like her with connective tissue disorders, she said, can find themselves at risk of injury if they're forced to overtax their bodies.

Autonomous chairs could also offer safety benefits in some cases, she said, citing examples of people prone to narcolepsy who might now be able to use a power wheelchair with less risk.

She confirmed that the technology would cost a fraction of most alternatives currently on the market and praised the fact that it could be used to enhance existing chairs, which themselves are already extremely expensive.

But she cautioned against treating such technology as a cure-all solution.

Self-driving chairs could contribute to the stigma power wheelchair users already face, she said, adding many are viewed as lazy and treated accordingly.

She also said the advent of technical solutions should not detract from society's efforts to build more inclusive environments.

"It seems to be very much the individualized focus that abled people tend to have when they try to think of accessible solutions, rather than disabled people who are arguing, 'I'd rather we work on making the built world more accessible,"' she said.

Burhanpurkar said Cyberworks is currently in the process of getting necessary approvals to allow wheelchair users to test the technology, adding the company also wants to expand it for use outdoors.