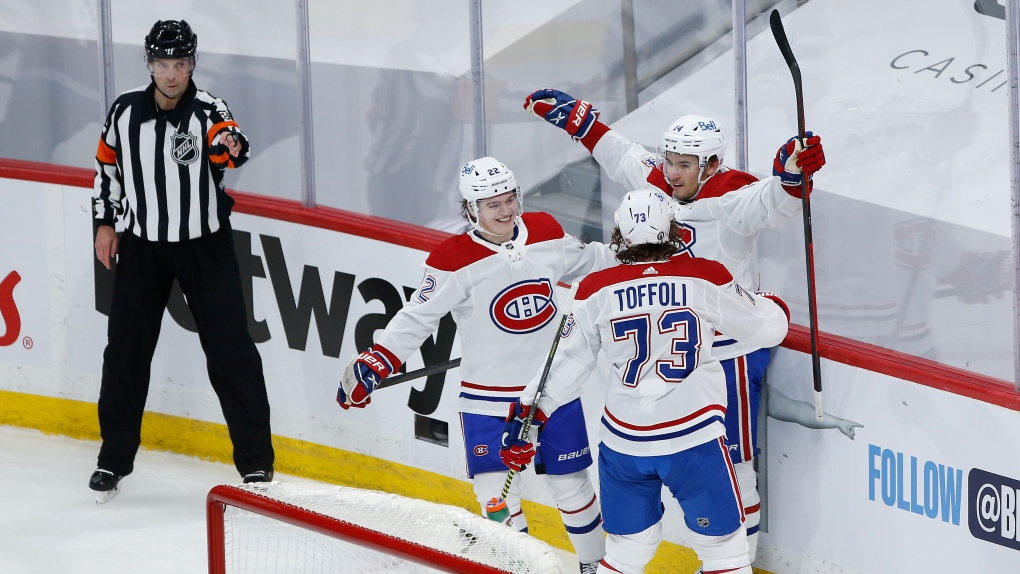 Jesperi Kotkaniemi and Eric Staal scored early in the first period to set the stage for the Montreal Canadiens' 5-3 victory over the Winnipeg Jets Game 1 of their second-round Stanley Cup playoff series on Wednesday.

Montreal also got a goals from Nick Suzuki, Brendan Gallagher and Jake Evans. Joel Edmundson and Jeff Petry each added a pair of assists. Carey Price made 27 saves.

The victory was marred when Evans had to be taken off the ice on a stretcher after he scored an empty-net goal with 57 seconds remaining. He was crushed by Jets centre Mark Scheifele as he was going around the net to score and laid on the ice. Scheifele was given a major for charging and a game misconduct.

Game 2 of the best-of-seven series goes Friday in Winnipeg.

Three of Montreal's goals were scored in the first period, beginning with Kotkaniemi at 3:30 and Staal at 5:10.

The players had more than canned crowd noise to hear inside Bell MTS Place for the first time this season.

The Manitoba government is allowing 500 fully vaccinated health-care workers to attend this week's two playoff games. More than 6,000 workers entered their names in a lottery to win a ticket.

"Utter shock," advanced care paramedic Mike McMillan said of getting one of the coveted ducts. "It was pretty breathtaking. It's a beautiful gesture for the past 16 months."

Manitoba is under code red restrictions that forbid public gatherings, but the health orders were changed for the games. Immediate family of Jets' players, coaches, managers and administration officials team could also watch the game inside the rink.

"It just felt like I could just go back to a little bit of normalcy," said Terri Jeanson, a laboratory technologist in clinical research. "I know there's some people that are upset about it, but it definitely makes it worth what we do."

The Canadiens were the first NHL team in Canada to have a crowd this year, allowing 2,500 fans to attend Game 6 against the Toronto Maple Leafs last Saturday after Quebec loosened restrictions.

The Leafs followed up by covering the cost for 550 fully vaccinated health-care workers to attend Game 7 against the Canadiens on Monday after being given the green light by Ontario.

The Winnipeg fans, who were given white shirts and hand towels, didn't have a chance to wave the towels in joy early in the first period.

Kotkaniemi redirected a point shot by Petry for his fourth goal of the playoffs. Staal quickly made it 2-0 with his first goal.

Winnipeg lost a player before and during the game.

Fans finally got a chance to jump out of their spaced-apart seats when Lowry scored shorthanded after defenceman Erik Gustafsson turned over the puck near the blue line. Lowry raced toward the net and slipped a backhand shot under Price's pad at 11:52.

Suzuki reinstated the two-goal lead at 17:14 during a 2-on-1 rush with Edmundson.

Winnipeg outshot the visitors 11-9 in the scoreless second period, and 22-21 up to that point.

Forbort closed the gap to 3-2 at 9:22 of the third, but Gallagher potted a rebound after a Shea Weber breakaway on the power play at 11:04.

Before the game, hockey analysts wondered if the Jets would have to shake off some rust.

It was Winnipeg's first game since May 24, when it swept the Edmonton Oilers in the North Division first round. Montreal erased a 3-1 series deficit and eliminated the Toronto Maple Leafs on Monday.

This report by The Canadian Press was first published June 2, 2021.

With just three days now until the federal election, the main party leaders will be keeping the campaign throttle wide open today as they chase any still undecided votes in Ontario, Quebec and Nova Scotia.

Canada has now fully vaccinated 78.37 per cent of the country's eligible population.

A trio of Chinese astronauts returned to Earth on Friday after a 90-day stay aboard their nation's first space station in China's longest mission yet.