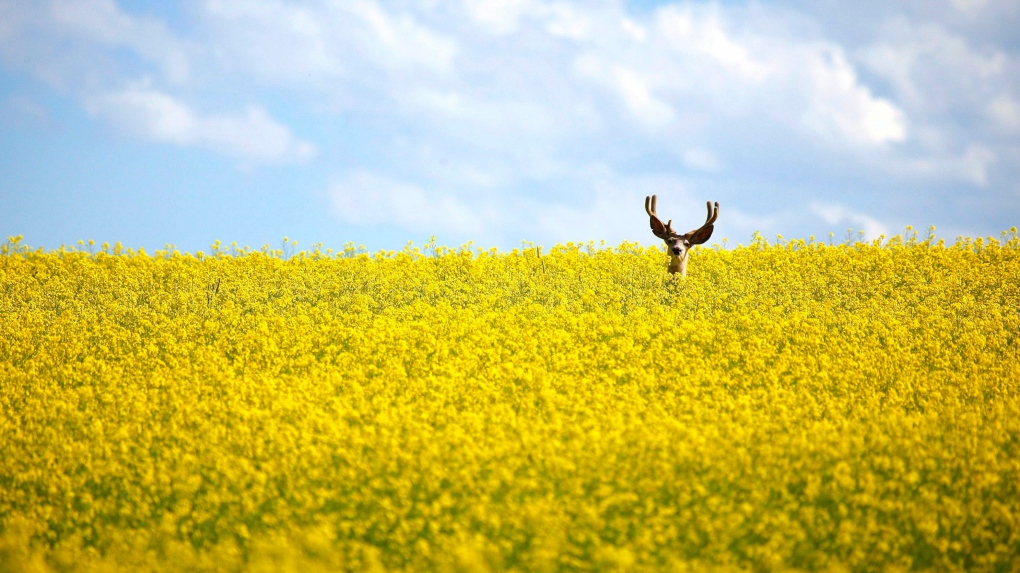 A stag stands in a neck high field of canola north of Cremona, Alta., on July 31, 2011. (Jeff McIntosh / THE CANADIAN PRESS)

EDMONTON -- Researchers are grappling with a tough new strain of a disease in Alberta that can kill or reduce the yield of oilseed-producing canola plants.

The discovery comes as the industry works to stop all forms of clubroot from spreading to other growing areas across the Prairies.

Clubroot has been in Europe for centuries but was first discovered in Western Canada near Edmonton in 2003. Since then the soil-borne pathogen has steadily moved from a few fields to 30 municipalities in mainly rural areas.

The disease deforms roots which are then no longer able to carry water and nutrients to leaves, stems and pods. Visible symptoms include wilting, stunted growth, yellowing, premature ripening and shrivelled seed.

Once established, it is hard to get rid of. Spores can survive in soil for up to 20 years.

New varieties of canola have been developed that can resist clubroot, but last year a newer strain of the disease was detected by a University of Alberta researcher.

"There are 16 fields confirmed in Alberta with a strain of clubroot that has overcome all of our resistant varieties that are currently on the market," said Dan Orchard, an agronomy specialist with the Canola Council of Canada.

"We have the best handle that we could possibly be expected to have on it, but it is still Mother Nature and a pathogen."

Canola, which is used to make cooking oil and animal feed, contributed more than $19 billion to Canada's economy in 2013. The council estimates there are more than 45,000 growers, mainly in the Prairie provinces.

Low concentrations of regular clubroot varieties have been found in Saskatchewan and Manitoba, but not the newer strain.

The disease, which can be spread by wind and on clubroot-infested soil picked up by farm and energy industry machinery, has not had a major effect on crop yields so far.

Orchard said the industry wants to ensure that continues by preventing all forms of clubroot from spreading into new growing areas. To that end, researchers are working to develop even tougher types of canola.

In the meantime, growers are being encouraged to plant the latest clubroot-resistant varieties before the disease shows up in fields.

"Rather than waiting until it arrives we want to get ahead of that kind of leading edge that is creeping across the Prairies and choke it back rather than chasing it," said Orchard.

The industry is also encouraging producers to extend crop rotations and to clean and disinfect machinery used in one field before moving to another.

Orchard said growers in Saskatchewan and Manitoba could be spared what is happening in Alberta if they follow those steps.

"They are getting on it so early that I just can't foresee clubroot having an impact in those provinces if they keep up with their management and monitoring and surveying.

"Alberta had to learn the hard way."