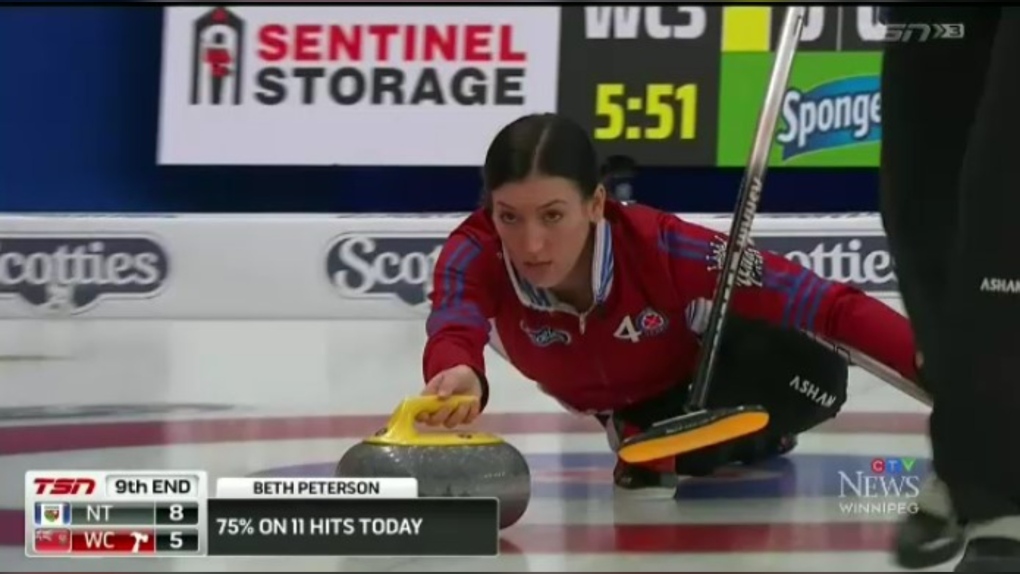 The win gave the young Manitoba-based skip a top-four spot in Pool A at 5-3 and a berth in the championship pool in her first appearance at the Scotties Tournament of Hearts.

WIth her draw weight in form when she needed it most, Peterson stole a single in the 10th and added another steal in the extra end for a 9-8 victory over Kerry Galusha of the Northwest Territories.

The win gave the young Manitoba-based skip a top-four spot in Pool A at 5-3 and a berth in the championship pool in her first appearance at the Scotties Tournament of Hearts.

"(We) really pumped each other up and at the same (time) calmed each other down and really supported each other," Peterson said of teammates Jenn Loder, Katherine Doerksen and Brittany Tran.

"I think that we were our best team in the 10th and 11th end that we have been this week."

The Pool B picture became clear after the evening draw at the Markin MacPhail Centre.

Brown rebounded in the evening with a 9-5 win over Prince Edward Island's Suzanne Birt, leaving both teams at 4-4. Jones dumped Nunavut's Lori Eddy 10-3 and St-Georges topped New Brunswick's Melissa Adams 9-7 in the other late games.

Galusha (4-4) was eliminated with her loss in the afternoon.

Her tap attempt in the 10th end moved the second shot stone just enough to prevent a steal of two. The confident Peterson put the pressure on again in the 11th and Galusha's draw to the button was light.

"The girls brought me back in after a few missed shots and we were able to capitalize in the last two ends," Peterson said. "We (threw) pretty much at 100 per cent in those last two ends. I'm thankful for my girls."

Carey, who's filling in for Tracy Fleury this week, thumped Newfoundland and Labrador 11-2 in the morning in her preliminary round finale.

Birt beat Nunavut 10-8 in the morning, that kept her championship pool hopes alive until the evening. The late results ensured there wouldn't be a tiebreaker game on Friday.

New Brunswick and Nova Scotia's Jill Brothers finished with 3-5 records. Newfoundland and Labrador was 2-6 and Nunavut was 0-8.

For the eight teams that advanced, records will carry over into the two-day championship round. Each team will play four games against teams that qualified from the other preliminary round pool.

The top three teams will advance to Sunday's playoffs. The top seed goes straight to the evening final and the second- and third-place teams will meet in an afternoon semifinal.

The Hearts winner will get a berth in the Tim Hortons Curling Trials and earn $100,000 of the $300,000 total purse. The champion will also return to the 2022 Scotties as Team Canada.

If the recently cancelled women's world championship is rescheduled later this season, the Hearts winner will represent Canada.

The March 5-14 Tim Hortons Brier will be the next event to be held in the spectator-free bubble. The Canada Olympic Park venue will host six bonspiels in all through late April.

This report by The Canadian Press was first published Feb. 25, 2021.