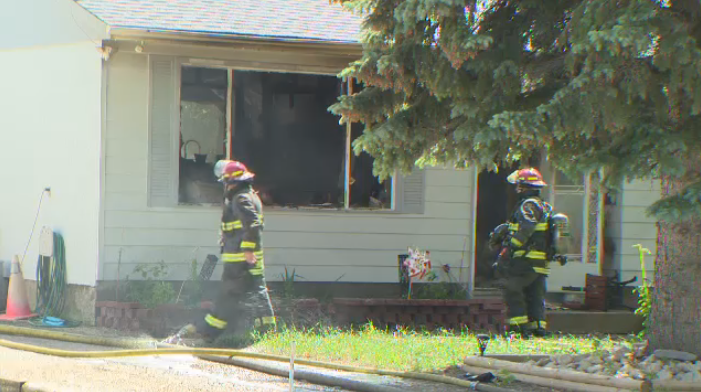 A home in the 800 block of Laxdal Road has significant damage after a morning fire on June 25, 2022. (Source: Dan Timmerman/CTV News)

No one was injured but one pet died after an early morning fire Saturday.

The city said crews were called to the 800 block of Laxdal Road for reports of a fire at a bungalow at 7:14 a.m.

Firefighters started an offensive attack on the fire but had to switch to a defensive approach over safety concerns.

Crews used hand lines as well as the Flameguard X-Tinguish Fire Suppression Tool to fight the blaze. The Flameguard is an aerosol device that reduces temperatures during a fire by generating a mist to flood the building and suppress the flames.

The city said the fire was declared under control by 9:35 a.m.

One person in the home was able to get out of the house and no injuries were reported.

Crews also rescued two pets from inside the home. One of the pets was reunited with the owner, but the other died from its injuries.

The city said emergency social services was called in to help the individual with temporary accommodations.

No damage estimates are available, but the city said the home suffered extensive damage.

The fire is under investigation