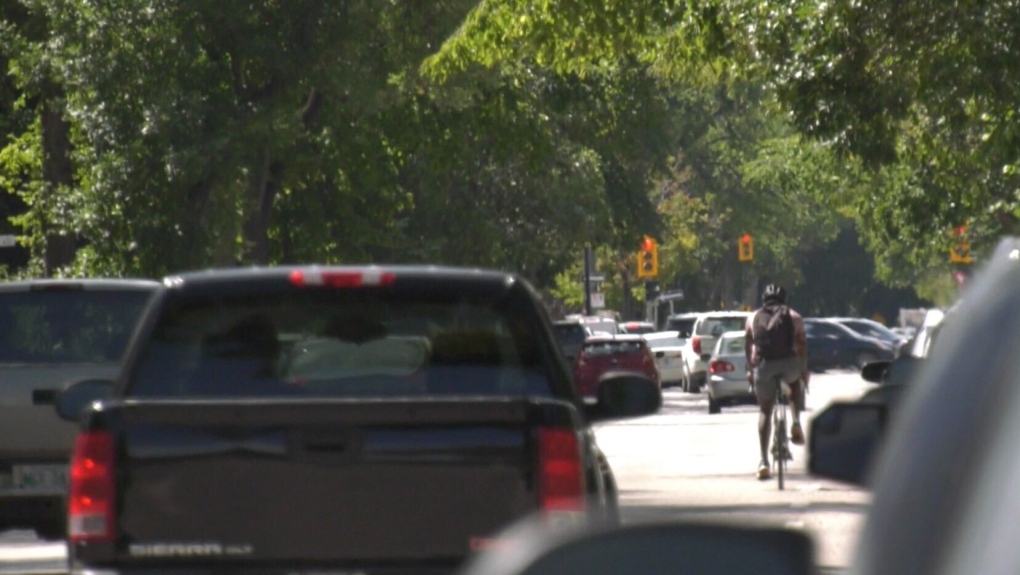 The City of Winnipeg is moving forward on a project aimed at fixing roads and improving safety for cyclists in Osborne Village.

Construction is slated to start next spring or summer but the city is meeting this summer with businesses and property owners who may be impacted by changes.

“It would be about dang time to do that because that’s going to drive a wedge between people’s relationships with biking on the road versus choosing their car to get just around the neighbourhood here,” said Ryan Kaul, an Osborne Village resident and avid cyclist.

The preliminary design calls for one-way protected bike lanes on River and Stradbrook between Harkness Avenue and Wellington Crescent, with a small stretch of two-way riding on River from Bryce Street to Fort Rouge Park.

Wellington is also slated to get a one-way protected bike lane from River to Stradbrook.

“It makes a huge difference and I’m excited to see this,” said Mark Cohoe, executive director of Bike Winnipeg. “This is a big game changer, a big step forward for the city because it really builds on that connectivity.”

The plan doesn’t yet address the issue of safety and connectivity for cyclists crossing the Osborne Street Bridge to and from the city’s downtown.

The proposed link, a walk-bike bridge over the Assiniboine River between McFadyen Park downtown and Fort Rouge Park in Osborne Village, was referred to the unfunded project list where it remains. 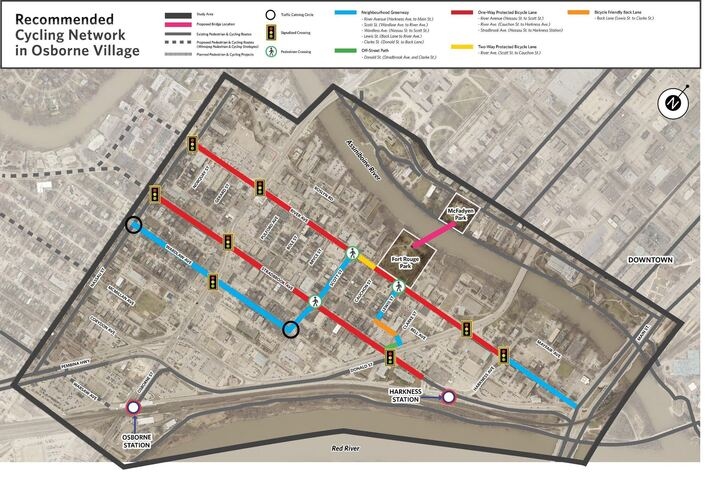 Source: The City of Winnipeg

Sherri Rollins, city councillor for Fort Rouge-East Fort Garry, said the walk-bike bridge remains a priority and a plan for her as she seeks re-election in this fall’s municipal election.

“The protected bike lanes is exciting but also what’s exciting is that it is really a lead up to a pedestrian cycle bridge that Winnipeggers want,” Rollins said.

The City of Winnipeg anticipates the lanes will have a positive impact but recognizes there will be trade-offs especially when it comes to parking and loading zones. Those are issues the city said it’s working on with area businesses and property owners.

Upcoming meetings with these groups will be held to help officials better understand current parking and loading needs and develop plans to mitigate any issues.

Miguel Gonzalez lives in West Broadway and commutes into Osborne Village for work, usually by bike. He understands the loss of parking might upset some but feels the benefits of protected bike lanes will outweigh any loss of parking.

“I think the commute will just be a lot safer,” Gonzalez said. “A lot more streamlined as well.

"There’s already a lot of traffic in the area with foot traffic, bike traffic – especially in the summer. So I think it’ll just kind of liven up the area a little bit more.”

In addition to making the commute safer, Kaul hopes the road renewal makes his ride smoother.

“The last few years Stradbrook has been rattling bikes to pieces,” Kaul said. “I think myself and my partner have ruined a couple tires and rims.”

The city previously conducted public engagement on the project and said it heard from a wide range of Winnipeggers who expressed overwhelming support and desire for protected bike lanes on River and Stradbrook.

Lindsay Somers, executive director of the Osborne Village Biz, said she’ll be attending a consultation with project planners and local businesses next week to learn more about the project.

What each province, territory is doing on National Day for Truth and Reconciliation

Friday is the second annual National Day for Truth and Reconciliation, also known as Orange Shirt Day. The federal government made Sept. 30 a statutory holiday for its workers and federally regulated workplaces last year.

The national chief of the Assembly of First Nations says today's National Day of Truth and Reconciliation is about the survivors of Canada's residential schools and the children who died in them and never made it home.

'Justinflation' can't be said in the House of Commons, but MPs are trying anyway

The Conservatives' cheeky term for inflation under the Liberals has got some MPs into trouble in the House of Commons, where saying 'Justinflation' has been deemed verboten.

Indigenous leaders in Quebec are lamenting the fact that priorities for their communities have been largely ignored during the provincial election campaign.