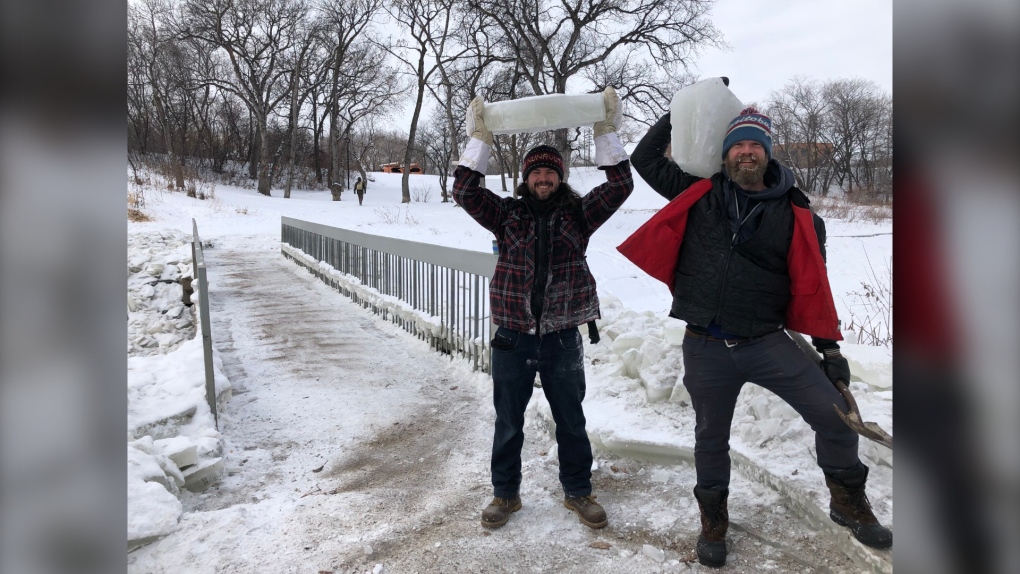 Chris Beauvilain and Brad Hignell cleared the footbridge after the city closed it due to ice. (File)

WINNIPEG -- Earlier this year, the City of Winnipeg called a footbridge over Omand's Creek a public safety risk. It turns out the city said a whole lot more about it - 97 pages of emails, to be exact.

The city closed the popular footbridge that connects Wolseley to River Heights due to a build-up of ice at the start of winter.

The barricade stayed until December when two men got fed up with the closure and cleared the bridge themselves.

Emails obtained by the Canadian Taxpayers Federation show how the city had a lengthy back-and-forth over the bridge.

"Ninety-seven pages is a lot of correspondence for something as simple as clearing a pedestrian bridge, especially when the focus seems to be more on crisis communications than the actual bridge," said Aaron Wudrick, federal director of the CTF.

The first emails concerning the bridge were sent on Dec. 4 and include a conversation between Mike Terleski, a bridge maintenance supervisor; Jim Donaldson, a traffic foreman; Mike Watsko, a streets supervisor; and Cindy Gilroy, a city councillor.

Members discussed how to clear the bridge and the possibility of structural damage due to flooding earlier in the year.

The email chain ended later that day with the conclusion it would take heavy machinery to clear the bridge and that the city would wait until the ice melts in the spring.

More emails were sent on Dec. 13, after residents in the area went to the media.

The chain discussed how crews could remove the ice on the bridge if the pathways around the bridge were cleared.

After a string of emails looping in five people, the city re-confirmed the bridge would remain closed until the ice melts in the spring.

After some conversation, the city gave this statement:

"While we understand the community's frustration, we want to stress the importance of respecting all City closures, signage and barricades. As we do not know the means, methods or tools used to clear the bridge and pathways, we will be attending to inspect the structural integrity of the bridge and safety of the adjacent area."

The next day, Darren Burmey, an operations engineer, went to inspect the bridge.

"Ice has been removed from the bridge,” said Burmey in an email. ”The ice on the pathway remains and is approx. 12" thick. There are steep decline(s?) from the built up ice to the bridge which may be hazardous. There is a meeting with Julie and Parks at 9:30 am. Signs as a minimum and removal of pathway ice with sanding and maintenance by Parks is recommended. Our crew removed the signs and barricades. The bridge is not damaged structurally."

He then expressed displeasure with the actions by residents to clear the route.

"Actions of the citizens to remove signing and barricades and ice is reckless and should be dealt with and they have not recognized slip hazards nor could of know the bridge was not closed for structural reasons," wrote Burmey.

A string of emails then began between about the city's final statement on the two men who cleared the ice.

"What we have now is a situation where residents are being heralded for taking matters into their own hands; in reality, the residents' actions caused more risk than existed in the first place," read the statement that was "softened" by the city's communications team.

Discussion on what will happen to the men who cleared the bridge began, with some saying the pair could receive a $150 fine for engaging in unauthorized activity in Winnipeg parks.

A city spokesperson confirmed to CTV that the city is not pursuing any repercussions against these individuals at this time.

The Canadian Taxpayers Federation says the situation is an excellent example of what can happen in government.

"It seems like this is a case where common sense got lost. There's really no need for it to be this complicated. It just reinforces the reputation of government of losing sight of what's important to regular people," said Wudrick

"Average residents should be concerned the city put in more effort into crafting a message to explain why two guys managed to do this all by themselves than just figuring out how to get the bridge cleared," he said.

The bridge is currently open.