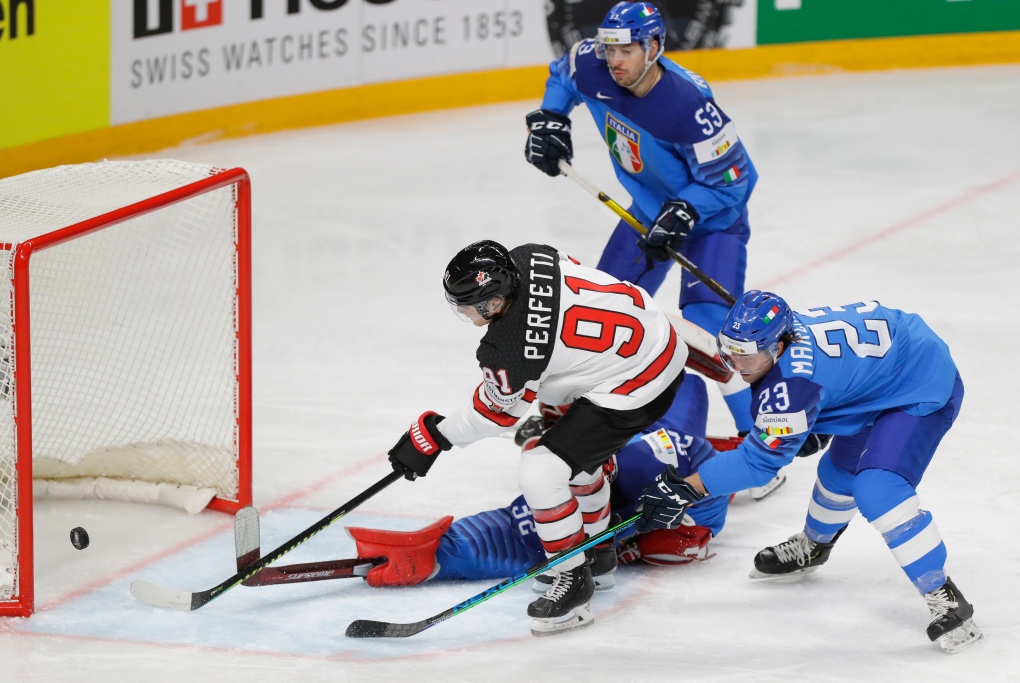 Canada's Cole Perfetti scores his side's opening goal during the Ice Hockey World Championship group B match between Italy and Canada at the Arena in Riga, Latvia, Sunday, May 30, 2021. (AP Photo/Sergei Grits)

WINNIPEG -- Winnipeg Jets prospect Cole Perfetti is leaps and bounds ahead of where he thought he’d be in his development to this point in his career following an unlikely season that saw him make an earlier than expected start to his professional career.

His season finished with a gold medal as part of Team Canada at the World Hockey Championship in Riga, Latvia.

“It was a real eye-opener for me, to realize I’m not far away on strength. I can play right now and it’s only going to get better as the summer goes on.” Perfetti reflected on his season during his media availability Thursday.

In a typical year, the 10th overall pick at the 2020 NHL Entry Draft would have likely spent another season playing Major Junior with the Saginaw Spirit of the Ontario Hockey League where he amassed 37 goals and 74 assists for 11 points through 61 games with the Spirit in 2019-2020.

While Perfetti was able to play for Team Canada at the World Junior Championship, COVID-19 forced the outright cancellation of the OHL season, making it the only Canadian Hockey League affiliate to not have any form of competition. Therefore, Perfetti found himself, somewhat unexpectedly, starring on the Jets American Hockey League affiliate, the Manitoba Moose before joining Team Canada in Latvia. An experience he surely would not have had while playing another season in the OHL.

“I wouldn’t be in the position I am if I was playing in the OHL still,” Perfetti said.

“Don’t get me wrong, the OHL is an amazing league and I wouldn’t be where I am today without it. But it’s just something about playing against men, with that strength and that speed...you have to experience it and that’s what is going to help you get to the next level. Being able to do that at 19 years old was very big for me.”

Sticking with the theme of “unlikely developments” the men’s national team, made up of no real bonafide NHL stars, became the first team in tournament history to win gold after starting the tournament 0-3. Perfetti, while not playing as integral a role as he did with the Moose, notched 2 goals through 10 games with Team Canada’s men’s squad, who beat Finland 3-2 in an overtime thriller to capture gold.

“Being on the ice was crazy. I remember, couldn’t get over the boards fast enough when (Nick Paul) scored. I was just dying to get over the boards, throw my gloves up in the air and start celebrating. There was so much excitement, so much joy. It was unbelievable,” Perfetti said.

“Winning never gets old and I haven’t done that in a couple of years so that was a pretty cool feeling, to finally get a gold medal and win with Hockey Canada.”

In a sense, the winning gold was redemption for Perfetti who earned a silver medal at the World Juniors after falling to the United States in the final.

“Going in (to the final game), I thought we were going to win a gold medal that night and I had my mind on a gold medal. To see that not happen — I dreamed of a gold medal my whole life — and it was tough,” Perfetti recalled.

“Obviously, carrying over into this tournament, we were in the gold (medal game) and we went to overtime. All I could think about was just not wanting to ever feel that sense of losing again. I just wanted to finally get a gold medal. Luckily we did and winning is a whole lot better than losing in the gold medal game, that’s for sure.”

As short and unpredictable as his season was, Perfetti believes the experience has allowed him to close the gap on his NHL dream at a much faster rate than had he played another year at the junior level.

“There were some things that I needed to do to get ready for the NHL. But playing this year with me and playing at the worlds and being able to make plays, score goals, be a contributor and most importantly, play with the strength and the speed, that’s where I was like, ‘I don’t know if I’m strong enough yet?’ It’s a man’s league. But playing these last five months with the Moose and with Team Canada here, I’ve realized that I can handle the strength, I can handle the speed.” Perfetti said.

“It was a real eye-opener for me, to realize I’m not far away on strength.”

And the advantage he’s gained through the opportunities this year is not lost on a young forward who just as easily could have lost an important year of development.

“COVID shut down a lot of kids’ hockey opportunities this year. A lot of my close friends from Saginaw and in the OHL didn’t even get to play hockey. They lost a whole year of development. It’s their draft year or if they’re (overage players), whatever it was, they didn’t get to play hockey and they lost out on a major year in their development in order to take that next step.” Perfetti said.

“It’s been a pretty busy year. In a year where a lot of kids didn’t get the opportunity and suffered, I was fortunate to get the chances and get the development and take that next step, to become that much better of a hockey player. I am very appreciative of it and realize that each step of the way.”

Perfetti is now back home in Ontario preparing for Jets training camp this coming fall, where he hopes to exchange his Manitoba Moose sweater for one of the Winnipeg Jets.