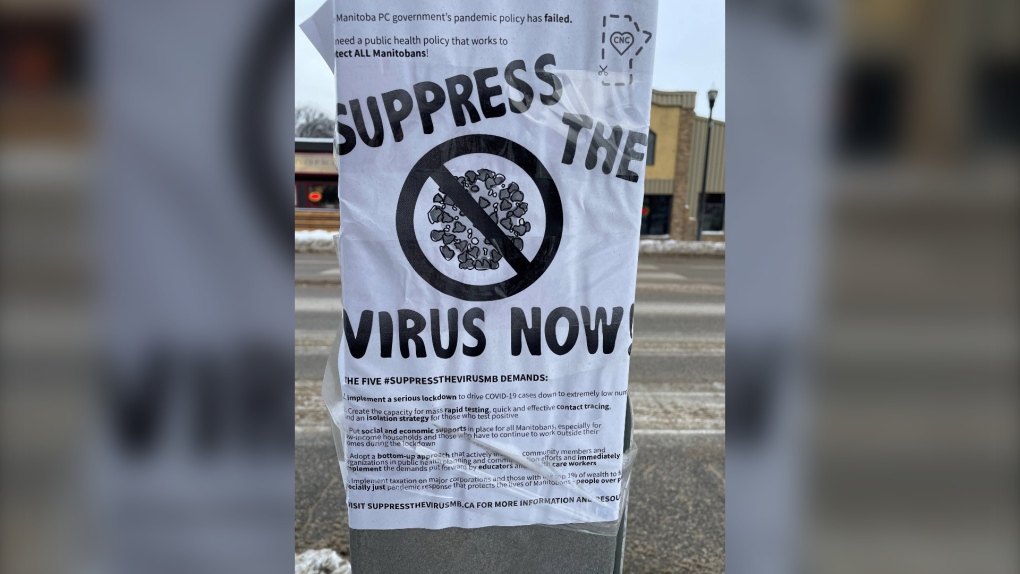 A photo of a "suppress the virus" poster posted on a Winnipeg street lamp on January 17, 2020.

WINNIPEG -- A group of concerned citizens, who banded together against government austerity effects on communities, has now focused its attention on pandemic concerns.

The group Communities Not Cuts has launched the 'SuppressthevirusMB' campaign. They say the Pallister government's pandemic policy has failed.

"We don't feel like they're doing enough and we feel like they are playing games with the lives of Manitobans," said Shawn Keppner with Communities Not Cuts. "And we think it can be done better."

On Sunday, some group members could be found on the Assiniboine River putting up signs.

The Hit the River event is part of the ongoing campaign to raise awareness about the government's pandemic response and get Manitobans to connect and raise virus transmission concerns with government officials.

The campaign has five demands.

The demands were created following consultations with community members and experts as well as research on other countries' pandemic response plans.

"Suppressing the virus is the most important and that means to continue with a very serious lockdown," said Keppner.

The campaign includes an online petition and outdoor signage. Since launching, the petition has collected over 600 signatures, with a goal of 5000.

"I think that we can't be focused on our own desires but rather what our needs are as the community," she said.

"We will deal with financial later. Right now, we have to get healthy. If we don't get this under control, it's going to be so much worse. Because more people are going to die and more organizations and businesses are going to be lost."

Keppner believes in a pandemic response plan based on ongoing communication between government, community, health and education professionals.

"We need to be talking to the healthcare people, to our educators, and working collectively," she said.