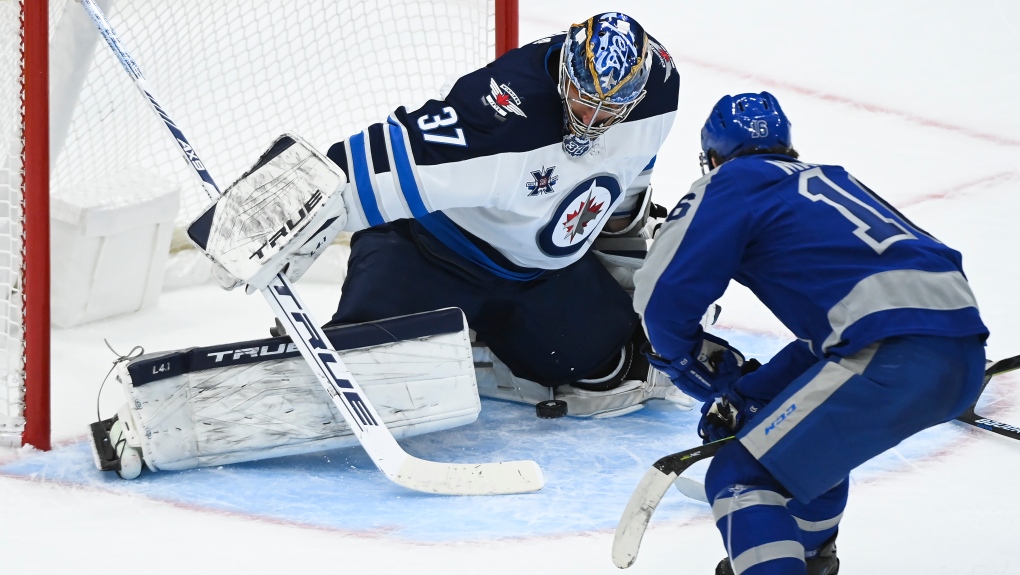 TORONTO -- Connor Hellebuyck made 36 saves as the Winnipeg Jets defeated the North Division-leading Toronto Maple Leafs 4-3 in the opener of a three-game series Tuesday.

Andrew Copp, with a goal and an assist, Josh Morrissey, Kyle Connor and Mason Appleton scored for Winnipeg (16-8-1). Neal Pionk added three assists and Nikolaj Ehlers had two of his own for the Jets, who now trail the Leafs by five points in the standings with two games in hand.

Auston Matthews, with his NHL-best 19th and 20th goals of the season, and Zach Hyman replied for Toronto (18-7-2). Frederik Andersen stopped 19 shots as the Leafs dropped their third straight in regulation.

Winnipeg was coming off an embarrassing 7-1 loss in Montreal to the Canadiens on Saturday that halted a four-game winning streak, while Toronto returned home following back-to-back defeats to the Vancouver Canucks after sweeping the Edmonton Oilers three straight by a combined 13-1 scoreline.

The Leafs and Jets play eight more times between now and April 24, including Thursday and Saturday back at Scotiabank Arena.

Down 2-1 through 20 minutes, Winnipeg got even at 12:45 of the second period when Matthews tried to block Morrissey's point shot, but instead saw it glance off his airborne skate and fool Andersen for the defenceman's first goal of the season.

The Jets then went ahead for the first time with 2:18 left when Ehlers showed great patience off the rush before finding Connor from behind the Toronto net to bury his 12th.

The Leafs had a couple of chances to make it 3-1 earlier in the period before Winnipeg equalized when Alexander Kerfoot had a chance from the slot on Hellebuyck and Ilya Mikheyev fanned on a tap-in off a pass from Morgan Rielly.

Down to five defenceman after Nathan Beaulieu took a shot off his hand, the Jets also came close as Mathieu Perreault was denied in tight by Andersen, while Blake Wheeler saw his sneaky deflection smothered by the Toronto goaltender.

Hellebuyck robbed Mitch Marner from point blank four minutes into the third as the Leafs came out of the intermission with more purpose.

But the Jets made it 4-2 at 7:53 when Appleton took a little pass from Copp before stepping around a sprawling Rielly and beating Andersen to score his seventh.

Toronto's goalie then stopped Wheeler on a break away with four minutes left in regulation to keep his team close.

Matthews scored his 20th of the campaign with 1:54 left in regulation and Andersen on the bench to make it 4-3, but the home side wouldn't get any closer and will now turn its attention to Thursday looking to snap a three-game slide.

The Leafs, who beat the Jets 3-1 in Toronto on Jan. 18 in the teams' only meeting this season, opened the scoring at 8:16 of the first when Hyman took a pass from T.J. Brodie in his own zone and sliced through a porous Winnipeg defence before roofing his eighth on Hellebuyck.

The visitors got even on their second man advantage of the evening at 12:20 when Copp recovered a loose puck and then finished off the sequence by tipping Pionk's point shot home for his fifth.

But Toronto got that one back when the league's top-ranked power play connected for the 26th time in 27 games this season as Matthews, who's been bothered by a wrist/hand injury and had failed to score in his last five outings, tipped his NHL-best 19th past Hellebuyck off Rielly's point shot.

This report by The Canadian Press was first published March 9, 2021.