Connor Hellebuyck on Jets' season: 'We had something special going' 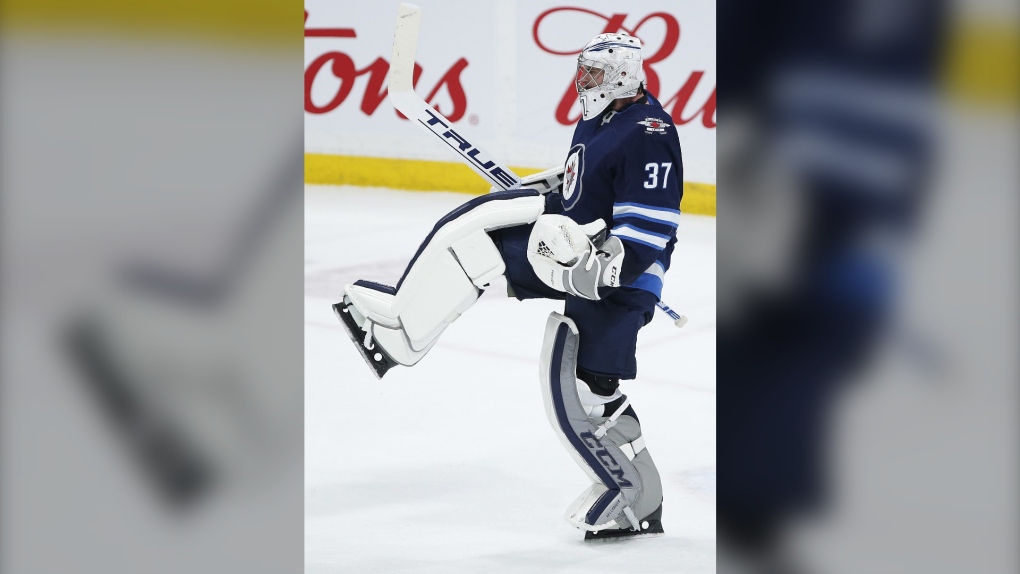 WINNIPEG -- Connor Hellebuyck felt like his Winnipeg Jets were on the cusp of something special when the COVID-19 pandemic brought their season to a screeching halt.

The team's star goalie could say the same about himself.

Hellebuyck backstopped a roster that lost four key members of its defence corps prior to the 2019-20 campaign -- the patchwork unit was then subsequently decimated by injuries for long stretches -- and had the club in a playoff spot when the NHL paused its schedule March 12.

His save percentage of .922, meanwhile, was just off the .924 he put up during a 44-win 2017-18 season when Winnipeg made the Western Conference final, and seven points better than his career average since entering the league in 2015-16.

Put it all together and Hellebuyck found himself in the thick of not only the Vezina Trophy race as NHL's top goalie, but also the Hart Trophy conversation, which is given to the player judged most valuable to his team, when the novel coronavirus outbreak put a halt to pretty much everything.

"It's an honour just to be mentioned," Hellebuyck said on a conference call Thursday. "This year has been such a grind, and I've had a blast doing it."

It looked like it could be a daunting task early.

The Jets lost defencemen Tyler Myers and Ben Chiarot in free agency over the summer after trading Jacob Trouba to the New York Rangers. Fellow blue-liner Neal Pionk came the other way in that deal, but Dustin Byfuglien then left the team in training camp and is unlikely to play again for the franchise, leaving a massive hole on the back end and an unused US$7.6 million on the salary cap.

Despite all that change, the Jets survived significant injuries on its remade blue line, a rough stretch of seven regulation losses in eight games in January, and a 1-4-1 run in late February before ripping off four straight victories in March to move into a playoff spot.

"I had that feeling we had something special going and we were peaking at the right time," said Hellebuyck, whose six shutouts are tied for the most in his career. "Everyone was starting to feel it in the locker room."

Then the pause came that infamous Thursday, less than 24 hours after the NBA suspended its season following a player's positive test for COVID-19.

"We were hearing rumours around that we were probably next," said Hellebuyck, the 130th pick in the 2012 NHL draft. "It was a shock and definitely disappointing.

"We really had that good (feeling) going."

Should the NHL resume this season at some point, the Jets' situation will be an interesting one. Winnipeg occupied the first wild-card spot in the West at the time of the pause, but would be out of the playoffs based on points percentage if no more regular-season games are contested.

Regardless of what happens, Hellebuyck said his approach and comfort level heading into 2019-20 made the difference after the Jets fell in six games to the St. Louis Blues, who would go onto win the Stanley Cup, in the first round last spring.

"I was ready to prove myself," he said. "I had a little more experience ... things were falling into place. I had the right mindset, the right coaches around me. And the guys were playing great in front of me, too.

"I was able to identify my game pretty easily at an early stage of this year and it just helped grow it."

Hellebuyck, who's spending this era of social distancing and self-isolation at home in Michigan with his girlfriend and brother, is thankful to hear his name mentioned in end-of-season-awards talk.

But he's only got one thing in mind whenever the games resume.

"It would be a great milestone and it would definitely be one of my goals achieved," he said. "But at the end of the day, what I truthfully want is the Stanley Cup."

This report by The Canadian Press was first published April 16, 2020.