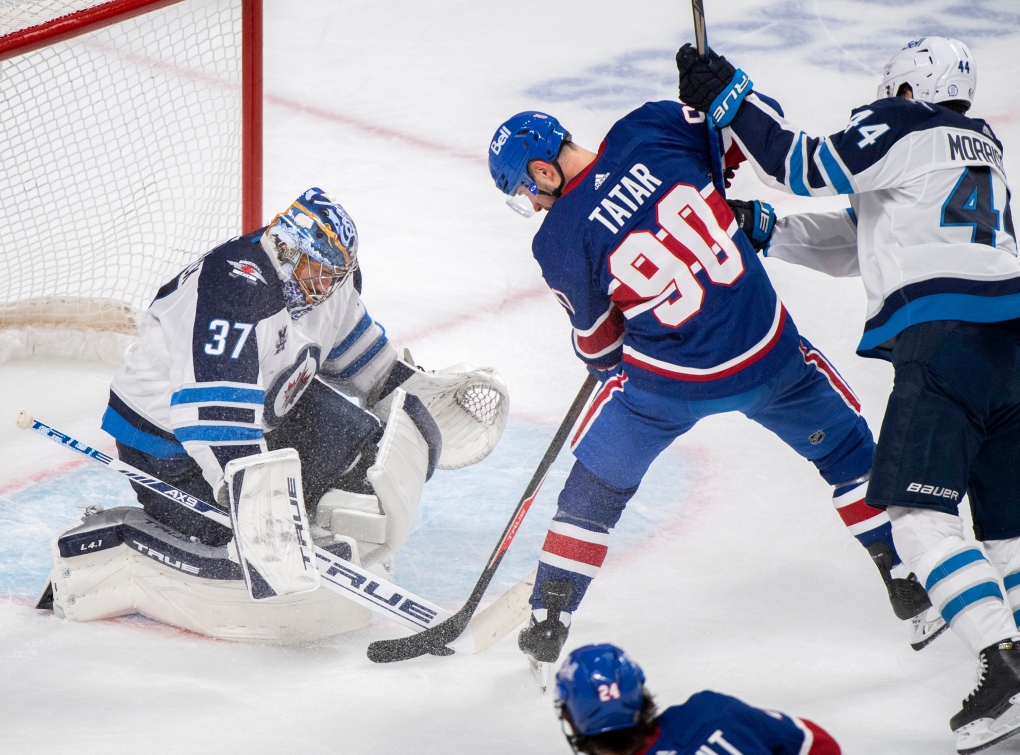 MONTREAL -- There was a moment Saturday's game when Winnipeg Jets head coach Paul Maurice felt his goaltender simply would not be scored on -- and he was right.

Connor Hellebuyck made 19 saves for his second shutout of the season to lead Winnipeg to a decisive 5-0 victory over the Montreal Canadiens.

Hellebuyck looked solid throughout and made some tough saves look easy, especially early on as he earned his 20th victory of the season.

"Earlier in the game they had more action," said Maurice. "Later in the game, he just looked solid. You get to a point in the game when he looks that way, you think, `I don't think they're going to beat him. We're going to have to make a pretty egregious mistake here.'

Hellebuyck needed to be on his game early as the Canadiens (17-12-9) came out looking to avenge a 4-2 loss to the Jets on Thursday. Hellebuyck stopped 36-of-38 shots in that win.

The Jets netminder turned away a flurry of chances in the game's opening two minutes, including two from Jeff Petry in quick succession. He stood tall and denied Corey Perry on the doorstep minutes later.

From there, he looked in control as the Jets (25-13-3) limited the high-danger scoring chances.

"All shutouts are a team shutout and tonight was no different," said Hellebuyck, who now has 22 in his NHL career. "The guys were blocking shots and keeping them to the outside, really applying the pressure in the o-zone. I thought we were a good team today."

Andrew Copp, Nikolaj Ehlers and Mathieu Perrault each had a goal and an assist, while Paul Stastny and Derek Forbort also scored.

After a first period where both teams went long stretches without registering a shot on goal -- the Jets needed more than 11 minutes to fire a puck on Montreal goalie Jake Allen -- the game opened up in the second.

Canadiens coach Dominique Ducharme said he wanted to see fewer mistakes from his men, who have now dropped three in a row, but a string of errors by Montreal led to the game's first goal at 10:13.

It started with a poor line change, which gave Pierre-Luc Dubois open ice at the blue line. When Dubois lost control of the puck on his breakaway, Allen charged and poked it away. But with Allen still out of his crease, Petry passed the puck right to Stastny, who snapped a six-game skid.

"We knew big errors would cost the team goals," said Montreal winger Tomas Tatar. "It's hard to say we didn't work or we didn't want it, because I honestly think we did, just the mistakes that we're doing are costing us the game. We need to get rid of it.

"Those mistakes are happening too often right now. We have to clean them up."

The visitors doubled their lead on a second-period power play. An offensive-zone faceoff win went to Ehlers, who fired a wrist shot over Allen's glove into the net.

The Habs felt Perreault interfered with Allen's glove while screening him. They challenged the call on the ice but the decision stood after a lengthy video review determined the incidental contact occurred outside the crease.

"I didn't know that I even touched him," said Perreault. "I was just coming across the crease but I'm not in the crease, I'm on top of the crease, and he extended his arm out.

"I'm entitled to that ice."

The Jets got a contribution from an unlikely goal-scorer when Forbort, from a difficult angle, made it 3-0 with 29 seconds remaining in the second period. It was the defenceman's first goal since Feb. 2 against Calgary.

Ducharme shuffled his lines to start the third period but it was more of the same.

Copp scored a fourth for the Jets at 7:13 from the slot after a nice passing play with Perreault and Ehlers -- a power-play goal. A bad giveaway by Shea Weber as he skated out from behind his net led to Perreault's unassisted goal at 10:42.

The Canadiens will be back in action Monday when they face the Leafs in Toronto. The Jets meet the Senators in Ottawa the same night.

This report by The Canadian Press was first published April 10, 2021.