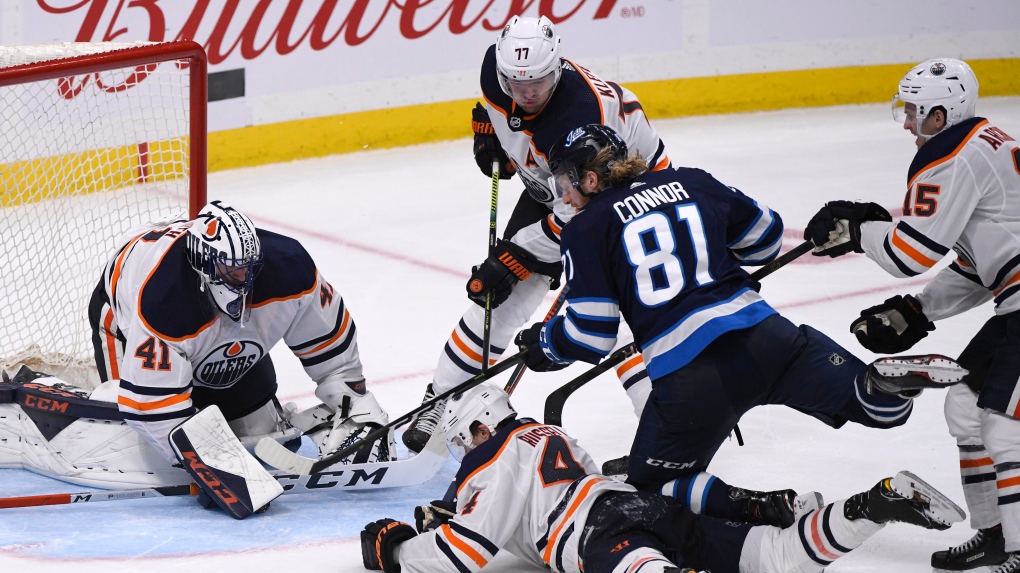 WINNIPEG -- Kyle Connor and Patrik Laine scored in the shootout as the Winnipeg Jets ended a three-game losing skid with a 1-0 victory over the Edmonton Oilers Sunday.

Connor Hellebuyck made 28 saves for his first shutout of the season.

Ryan Nugent-Hopkins and Connor McDavid were stopped in the shootout.

Edmonton goalie Mike Smith robbed Mark Scheifele in close and Hellebuyck followed that up by denying Connor McDavid on a breakaway.

Smith made 23 saves for the Oilers (7-1-1), who came into the game winners of two straight.

Winnipeg (5-5-0) was playing its fourth game of a five-game homestand.

The Jets are undefeated in regulation in their last seven games against the Oilers. Their last loss was Dec. 1, 2016.

Jets defenceman Carl Dahlstrom appeared to score his first NHL goal at 8:23 of the third period, but the play was reviewed and Scheifele was ruled offside and the goal wiped away.

The Jets didn't get their first shot on goal until 8:06 and finished with another 11 attempts in the period, five that missed the net and six that were blocked.

The Oilers went on a power play with 1:56 left in the opening period and had one shot Hellebuyck turned aside.

Winnipeg went on its first power play seven minutes in the second period and got four shots on Smith.

McDavid was then called for slashing his Jets counterpart Blake Wheeler late in the second. Winnipeg tallied three shots on goal, including a low Mathieu Perreault shot that Smith squeezed into his body.

Jets centre Bryan Little, making his season debut after suffering a concussion in a pre-season game, went to the penalty box for slashing at 18:46.

Shots on goal after the middle frame were 15-12 in Edmonton's favour.

Winnipeg had its third power play of the game 26 seconds into the third and Smith stopped Laine's low, one-timer blast and a shot from Dmitry Kulikov.

Less than a minute after Dahlstrom's goal was disallowed, the Jets went on the power play again. Smith denied three shot attempts, including two quick ones from close in.

Winnipeg finishes its five-game homestand by hosting the Los Angeles Kings Tuesday. The Oilers are in Minnesota the same night to play the Wild.

This report by The Canadian Press was first published Oct. 20, 2019.